Caroline "Carrie" Mays Brevard was born August 29, 1860, on her family's plantation in Tallahassee, Florida. She was the oldest child of Mary Laura Call and Theodore W. Brevard, Jr., who had served in the Civil War as a Confederate general. Caroline was descended from two prominent southern families. On her mother's side, her grandfather was Florida's third and fifth territorial governor. On her father's side, her grandfather was a Florida Judge. Brevard never married.

Brevard was educated at private schools in Tallahassee and at the small Cleveland Seminary in North Carolina. At the age of 18, she taught history and English for one year at Seminary West of the Suwannee, which later became Florida State University (FSU). In the 1890s she appears to have run her own small private school in Tallahassee. By 1892, she was a teacher at the Leon County Academy in Tallahassee. Brevard continued her own education by attending the Summer School of the South in Knoxville in 1904 and taking classes on economics and literature at Summer Session at Columbia University. She passed the teachers exam for the Tallahassee public schools in 1901 and became a history teacher at Leon High School in 1905. In 1915, she began teaching history and geography and became chair of the History Department at Florida State College for Women later to be FSU. She, herself, never graduated from college.

Brevard published the History of Florida in 1904 and it became a required textbook in Florida schools. It was removed from the Florida curriculum in the 1920s as biased and racist. She also wrote for local newspapers, published a book on folktales, and wrote about southern literature. In 1924, the Florida Historical Society published the posthumous work, A History of Florida from the Treaty of 1763 to Our Own Times. She was actively involved in a number of women's groups including the Daughters of the Confederacy for which she served as a historian and was active in a campaign to install monuments in Florida honoring the confederacy. Caroline Mays Brevard, who became its first president, organized the Anna Jackson Chapter of the United Daughters of the Confederacy in Tallahassee in 1898. She also belonged to and served as the historian for the National Society of the Colonial Dames of America. And she was a member of various educational associations. Brevard was the founding member and president of the Association of the History Teachers of Florida. She was also active in the Florida Historical Society. They now offer the Carolyn [sic] Mays Brevard Undergraduate Essay Award in her memory.

Florida was a late arrival to the suffrage movement. The first suffrage group, the Florida Equal Franchise League (FEFL), was organized in 1912 in Jacksonville. In early 1913 Mary Safford, a noted suffragist leader from Iowa who had recently moved to Florida, organized the Orlando Suffragist League. This group needed local representation in Tallahassee for the state government's biennial legislative sessions. Safford was instrumental in organizing the short-lived Tallahassee Suffrage League with Brevard as a local member.

In the fall of 1913 a meeting of was organized by Safford in Orlando to coincide with the annual convention of the Florida Federation of Woman's Clubs. This led to the founding of the Florida Equal Suffrage Association (FESA), which became a rival group to FEFL. Brevard served as third vice president of FESA. Because Brevard was based in Tallahassee, she again became involved in 1915 setting up the Tallahassee Equal Suffrage League but this too did not survive.

From 1914 to through 1917, Brevard served as a member of the Legislature Committee of FESA. This committee served as FESA lobbyists during the legislature's 1915 and 1917 sessions.

In 1916, the National Woman's Party (NWP) was organized to get federal legislation passed on suffrage. NWP was more radical than the National American Woman Suffrage Association and began organizing at the state level setting up along congressional districts. It started a group in Florida in 1917. In 1918 Brevard became secretary for the local NWP committee for the Florida Third Congressional District that then included the city of Tallahassee.

Unfortunately, the suffrage movement in Florida was scattered, not politically astute, and never very well organized. In 1915, 1917, and in a special legislative session in 1919, the state did not pass any woman suffrage legislation despite various attempts by FESA and others to promote suffrage in Florida. The state legislature also never convened to vote on the Federal amendment and Florida was the only state that took no action on the Susan B. Anthony Amendment.

Brevard died March 27, 1920, at the age of 59, just months before the ratification of the 19th Amendment. She is buried at St. John's Episcopal Church Cemetery in Tallahassee.

At the time of her death, Brevard was honored with many memorials. An elementary school in Tallahassee was named after her as well as the local chapter of the Daughters of the American Revolution. Unfortunately, today, Brevard's legacy is almost forgotten and has now become tarnished because of her writings and work in support of the confederacy and racism. 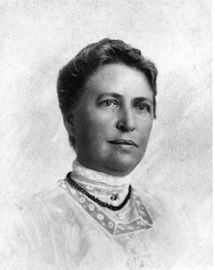 The Growth of Suffrage in Florida. Pensacola News Journal. May 9, 1915. p. 7. Database: Newspapers by Ancestry.

Cox, Karen L. Dixie's Daughters. The United Daughters of the Confederacy and the preservation of confederate culture. Gainesville: University Press of Florida, 2003.

_____. A History of Florida from the Treaty of 1763 to Our Own Times. Edited by James Alexander Robertson. Deland, FL: The Florida State Historical Society, 1924.