Caroline Stephens Zeigler was born in June 1867 to George B. Zeigler and Mary A. Stephens Zeigler in the town of Quincy, Florida. She was the great-great-granddaughter of the Revolutionary War captain of the Virginia militia, William Fitzgerald (1750-1818). This relation enabled her to join the Daughters of the American Revolution; she also was active in the United Daughters of the Confederacy. She was educated at Fairmont College, an all female college in Monteagle, Tennessee, and the State Normal School, now known as Salem State University, in Salem, Massachusetts. She was a high school teacher for 5 years.

On May 28, 1902, Huber was elected president of the newly reformed organization called the Club of Current Events. This club played a significant role throughout Huber's life and combined reading, discussion of current events, and community outreach. As a teacher, Huber had an interest in school matters such as promoting the compulsory education bill and conducting training for primary school principals. She also helped organize the Ocala High School. Additionally, she had an interest in child labor laws and served as Chairman of Child Labor Committee. That committee was part of the Florida Federation of Woman's Clubs, for which Huber served as 2nd Vice-President. Huber also had an interest in the fire protection law, the pure drug bill, and the Hillsboro Humane Society. These pursuits were highly intertwined with her role with the Club of Current Events, which became the Woman's City Club in the spring of 1913 when, once again, she was the president of the Club. During the 12 years she spent with the club, she did not always serve as the president and had resigned from the organization at least twice, as noted by the Tampa Tribune (January 11, 1903 and December 14, 1913).

In November 1913, the Florida Equal Suffrage Association was formed at a meeting in Orlando; and Huber was elected as its first vice-president (The Ocala Evening Star, November 11, 1913). Details of Huber's term and accomplishments are unknown. However, TheTampa Tribune reported the following on February 3, 1914:

"The first stationery that the Equal Suffrage Association has had printed was gotten out by the Tribune. They are planning also as soon as they can to get out a special suffrage edition for Florida and they want if possible to have the work done in Tampa. The articles contributed will be requested from each federated club in the State and prominent club and suffrage leaders all over the country."

Also during her term, she wrote a letter to United States Representative from Florida, Claude L'Engle, concerning why "he did not vote in the Democratic caucus the other night either for or against woman suffrage." (The Miami News, February 13, 1914). He replied that he did not like the circumstances of the meeting but that he did support woman suffrage.

Huber included suffrage within the Woman's City Club. One case, reported in The Tampa Times, on April 15, 1914, said the club "introduced Mrs. Wesley Martin Stoner, as the club's most distinguished member, and who will represent this club and the educational department....Mrs. Stoner then gave a fine talk on Equal Suffrage winning all her listeners... the Woman's City club will entertain at a suffrage tea in honor of Mrs. Stoner, to which all the ladies in the city are invited and to which gentlemen are welcome."

Huber resigned from the Woman's City Club in June of 1914 and moved during summer to Webster, Florida. There she continued her active role within women's clubs by at least participating in the Webster Woman's Club (part of the Florida Federation of Woman's Clubs). During her time with the club she served many roles including president (Tampa Tribune, July 14, 1915).

Huber passed away on May 8, 1920, in Gainesville, Florida, after a short illness. She was buried in Woodlawn Cemetery located in Tampa, Florida. 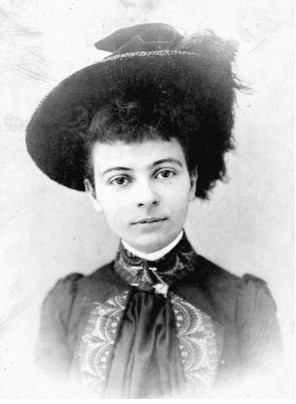 Photo of Huber from the State Library and Archives of Florida.