Ida Sophie Weis was born on 30 June 1868 in Natchez, Mississippi to Julius Weis and Caroline Meyer. Julius, a Bavarian-born Jewish businessman, went into business with the Meyer family as a cotton broker. Though Julius and Caroline lived in New Orleans, Caroline returned to her hometown for the births of several of her children. The Friend family was well off, employing multiple live-in servants. In total, Julius and Caroline had two daughters and five sons. Ida was the third oldest child.

As a child, Ida studied at a small school run by Miss Flora Gayle. In 1882-1883, Ida and her family left for an extended stay in Germany and France, where the focus was on the children's education. Ida learned to speak both German and French during this time. In New Orleans, the family were members of Temple Sinai.

Ida was active in many cultural, educational, and charitable organizations, like the Public School Alliance, the Co-Operative Presidents' Club (another educational organization), the St. Louis Cathedral Restoration Campaign, the Louisiana State Federation of Women's Clubs, the Milk Committee (which worked to improve the quality of milk distributed in New Orleans), the Association of Commerce, the Commission on Interracial Cooperation, and others. In addition, she served on the board of the Home for Incurables. During World War I, Ida was a part of the "war savings movement," promoting thriftiness on the homefront, and of the Red Cross auxiliary.

In 1914, Ida was an outspoken advocate for the new automobile regulations being passed, which included a requirement that all vehicles be registered and that a photo of the registrant be placed on file with the city. Ida wrote that, being "a loyal citizen, desiring the best methods for the safety of our walking and riding public," she supported the new ordinance and felt her fellow womenfolk would agree, in the hopes of meeting the "best standards" as seen elsewhere.

As for her participation in the suffrage movement, Ida Friend was a member of the Era Club by 1914. The only other reference to her support of woman suffrage came in a footnote to the Louisiana state report in the History of Woman Suffrage, vol. 6, that included Mrs. Friend in a list of "officers and workers" in the Woman Suffrage Party in 1919.

In 1920 Friend was the first woman to be seated as a delegate from Louisiana to the Democratic National Convention. The next year she was a delegate to the state Constitutional Convention, held in Baton Rouge. She was one of three women who attended the convention--the first time women were ever present. There were, in total, 146 delegates present.

Ida and Joseph lost their son Henry, also known as "Bunny" in 1924, when he was only 18. In his memory, they donated land to the city to establish Bunny Friend Playground.

Ida was a leader among Jewish women in New Orleans, founding a Hadassah (a Zionist women's group), leading the local B'nai B'rith chapter, and serving as president of the National Council of Jewish Women from 1926-1932.

The city recognized Ida for her lifelong devotion to and support for various humanitarian causes in New Orleans. In 1946, she was recognized by the Civic, Educational, Philanthropic, and Cultural Groups of New Orleans for her "more than 40 years of loyal service in advancing every meritorious cause for the benefit of New Orleans" and was later given the Times-Picayune's Loving Cup. The local arm of B'nai B'rith, a worldwide Jewish service organization, also named a chapter after her, in honor of her service. 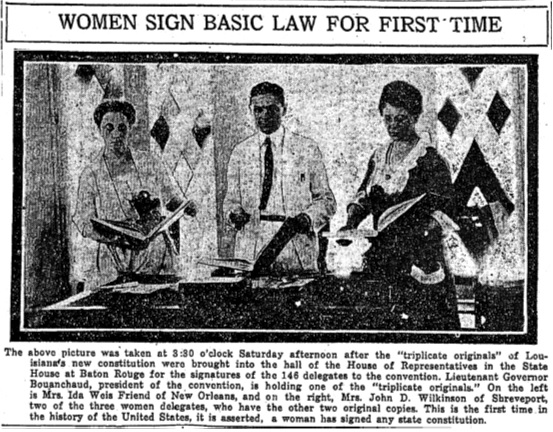 The Encyclopedia of Jewish Women, accessed online at https://jwa.org/people/friend-ida.