Mary Howard Raiford, was an impassioned advocate and influential leader of the women's suffrage movement in Alabama. Although born in Bowling Green, Kentucky, to Isaac Howard and Georgianna Baker Howard, she was reared in Selma, AL where her parents had already established their home. She received her higher education at St. Mary's in New Jersey. During her college years Mrs. Raiford made many interesting and enduring friendships with people across the nation; one friend, Mrs. Helen Frances Warren Pershing, the wife of General John Pershing, heralded as one of the nations' great soldiers, lost her life in the Presidio fire in California, which greatly affected Mrs. Raiford.

Returning to Selma after her college studies, Mrs. Raiford launched her successful business career as one of the city's first businesswomen in the cotton brokerage firm of her father on Water Avenue.

While every school child is familiar with Selma's key role in the civil rights movement of the 1960s, and the subsequent passage of the Voting Rights Act in 1965, however, even Selma natives are often amazed to learn that the city was also the battleground of an earlier movement to secure the vote for another group of disenfranchised Americans: women. Selma had the distinction of being birthplace of the women's suffrage movement and of the anti-suffrage movement in Alabama. In 1901, Selma legislator, Benjamin H. Craig, was defeated in his efforts to secure the vote for Alabama's women at the 1901 state constitutional convention. However, Nelly V. Baker, also of Selma, headed the Alabama Association Opposed to Women Suffrage and was joined in her fight for "home rule, states' rights and white supremacy" by the widows of two delegates to the 1901 constitutional convention, Mrs. John F. Burns, whose husband had opposed women's suffrage, and Cola Barr Craig, whose husband had fought in favor of it.

The movement fell silent until a meeting at Selma's Carnegie library on March 29, 1910 rejuvenated a group of ladies including Aimee Nelson DuBose, wife of a Selma physician; Mary Amelia John Watson, daughter of Mayor J. R. John and a founder of the library; the Partridge sisters, Julie P. Hatch and Mary Winslow Partridge, and of course, Mary Howard Raiford, who at the time was business manager of The Selma Times. It was during this meeting that the Selma Suffrage Association was formed. Two years later, the state's first women's suffrage group, the Selma Suffrage Association, joined with the fledgling Birmingham organization to form the Alabama Equal Suffrage Association (AESA), established in Selma in 1910 where the first state convention was held at Selma's Hotel Albert.

From an early start with a single Linotype machine, a flat-bed, hand operated press, and a circulation of 500 (counting exchanges), Mary Howard Raiford and Frazier Titus Raiford, the son of a Confederate veteran from Holly Springs, Mississippi, entered the newspaper management field in 1914 with the purchase of The Selma Times, then operating as a morning paper. By 1915, a pamphlet began circulating hailing the women's suffrage movement as the "most dangerous blow aimed at the peace and happiness of the people of Alabama and white supremacy since the Civil War, striking a blow at the cleanest, highest, and most beautiful civilization on earth." Consequently, many feared that if women got the vote, it could possibly lead to all kinds of other things like blacks getting the vote and the racial integration of society. Moreover, most even predicted it would be the end of Southern civilization as they knew it.

In 1917, a group of 20 to 30 Selma ladies, spearheaded by Mrs. Raiford, produced a special issue of TheSelma Times devoted to the suffrage cause. As the nation, amid World War I, was fighting to make the world safe for democracy, the tide across the country was turning in favor of a constitutional amendment granting women the vote.

By 1919 the AESA had the support of the Alabama Educational Association, the Farmers Union, the Alabama Federation of Labor, and the Woman's Christian Temperance Union. But Dallas County voters, all male, refused to see the light, defeating longtime legislator and women's suffrage champion, Sam Will John, but re-electing Joseph Green who led the opposition in the House. In the state Senate, Orrville's James B. Ellis led the tide against female suffrage.

As the state Legislature continually denied the vote to Alabama women, a pivotal business decision was made when Mary Howard Raiford and her husband purchased The Selma Journal, an afternoon newspaper, which opposed the women's suffrage movement and often reported anti-suffrage speeches, later consolidated the newspaper with The Selma Times, which wholeheartedly supported the women's suffrage movement. Ironically, it was The Selma Times-Journal, first published on March 1, 1920, that heralded the long-awaited news that the women of Selma had voted for the first time in the presidential election of November 1920.

At the centennial celebration of The Selma Times-Journal in 1927, it was the second oldest newspaper in Alabama, the 10th in the South and the 42nd in the nation.

Under Mrs. Raiford's proficient and ingenious management, both the newspaper and its publishers received many awards for public services. Although Mrs. Raiford shunned personal publicity, preferring to perform her many services without public notice, she donated the columns of The Selma Times-Journal to every local civic effort in addition to her personal contributions underwriting countless programs, particularly those benefiting agricultural training for youth, industrial, and river development.

Throughout her life, Mary Baker Howard Raiford maintained an avid interest in all phases of business and upon her husband's death in 1936, Mrs. Raiford became the only female publisher in Alabama, continuing to direct the paper for twenty-three more years. Mary Raiford was one of Alabama's rare citizens who lived fully with a deep sense of diplomacy and aplomb. She served as the only woman member of the executive board of the Chamber of Commerce prior to her death on July 11, 1959. 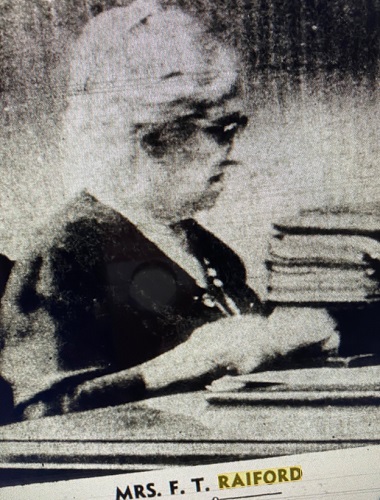