Olive P. Swan was born Olive Burch in St. Charles County, Missouri on March 10, 1875 to Dr. William S. Burch and Sarah Anne "Sallie" Burch. Dr. Burch and Sallie had three children, including Olive, in addition to three children from Sallie's previous marriage. Sallie's first husband, and father of her first three children, died during the Civil War at the Battle of Lexington in Missouri. The War left Sallie a widow until she married Swan's father in 1868. Olive married Edwin Swan in 1912. The couple did not have any children.

The United States entry into the First World War contributed to Olive Swan's increased activism and community involvement. For example, she volunteered with the Food and Drug Administration. Her war efforts continued and in April of 1918, she attended the Women's Committee of Missouri Council of National Defense as a member of a St. Louis delegation of women. The Committee's executive board aimed to encourage women to become interested and participate in war work. As a member of the Committee, she suggested that the pageant "The Progress of Liberty" be held at the St. Louis Municipal Theater in the Spring of 1918 to raise funds for the war effort. On Nov. 19, 1918, Swan attended a luncheon hosted by the Women's Committee of the Soldiers, Sailors and Marines Club and listened to a lecture on "Women in War Work" given by Deborah Knox Livingston, the guest of honor.

If the war prompted Swan's civic engagement, her interest in women's suffrage kept her involved after its end. Between 1919 and 1922 she served as Executive Secretary for the Missouri Equal Suffrage Association. On July 3, 1919 Olive P. Swan attended the ratification signing of the Woman Suffrage Amendment in Missouri, which was the eleventh state to do so. After ratification, the organization and Swan focused their attention on the education and organization of new voters. This resulted in the establishment of nonpartisan citizenship schools to educate voters.

Swan worked to arrange citizenship schools throughout Missouri under Vice-Chairman and Acting Director of the Organization and Citizenship Schools, Edna Gellhorn. Swan's leadership helped establish citizenship schools in each of the sixteen congressional districts in the state. The schools were widely attended by women, particularly in the Kansas City and St. Louis areas, and were community-supported efforts. The schools were a community effort where the League managed the school, the Young Women's Christian Association (YWCA) provided the space for the first school, and the St. Louis Board of Education provided furniture and covered the instructors' wages.

In addition to educating voters, the League also encouraged political parties to incorporate planks endorsed by the League into their political platforms. This effort was known as the "plank factory." The St. Louis Post-Dispatch reported that by September 1919, the League had announced that their concerns were "American citizenship, protection of women in industry, child welfare, improvement of election laws and methods, social hygiene, unification of laws concerning the civil status of women, food supply and demand, and research."

After her husband died in 1921, Swan resigned her post at the League and left for the Hawaiian Islands. She then moved to California where many of her siblings resided at the time. She lived in Los Angeles until her death on December 10, 1971. 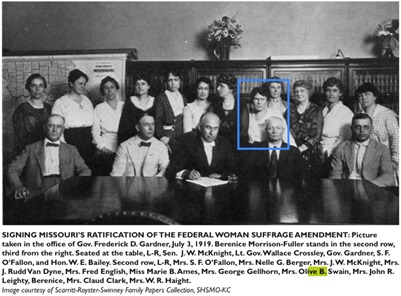