South Dakota Suffragist Nina Dalton Pettigrew was born on 31 August 1858 in Illinois and grew to maturity in southwestern Iowa. She taught school in the 1880s but in 1894 the Congregational Church ordained her, possibly in Iowa, where she began her career as a pastor in Red Oak and De Moines. In 1895, Pettigrew took a pastorate in Lusk, Wyoming. She had married Todd M. Pettigrew, also born in Illinois, in 1883. It is not clear how the two met as his natal family migrated to the Black Hills, Dakota Territory, in the 1870s; he worked a variety of jobs: "range activities," farming, mining and merchandising. The two had one son, Todd, Jr. and one daughter, Gertrude. Around 1896, Nina Pettigrew became the pastor at Keystone, in the Black Hills. In the early 1900s she also may have held pastorates in Nebraska and possibly Minnesota. The Pettigrews eventually settled in Belle Fourche in the Black Hills and also may have lived for a time in Spearfish, where his parents lived.

Pettigrew early showed a talent for management. Her congregation at Lusk built a new parsonage during her tenure as pastor. Her early activism centered on state Congregational Church and Sunday School Associations, the Women's Home Missionary and Woman's Christian Temperance Unions, and the Federation of Women's Clubs. At the Congregational Association's 1897 convention, Pettigrew lectured on practical management for pastorates. She argued a pastor should inspire others to work and that "symmetry and system" in planning brought success. Pettigrew may have come to the woman suffrage cause as part of her ministry; an 1898 paper that she presented at a convention, although expressing paternalistic racial superiority, also suggests particular attention to women's lives. Entitled "How to Interest the Uninterested," it included "a series of word pictures taken from real scenes in our heathen sisters' lives" and according to meeting minutes, "made a lasting impression on many of us, leading us to re-consecrate ourselves to woman's work for women." In 1905, she served as a discussant on "Preservation of forests in the Black Hills" for the Federation of Women's Clubs. Pettigrew had well-honed leadership and public speaking skills by the time she advocated for woman suffrage.

Pettigrew participated in the waning days of the South Dakota Equal Suffrage Association (SDESA), first established to work for the constitutionally-mandated, first post-statehood referendum on women's voting rights. Pettigrew advocated for "Political Equality" in support of South Dakota's 1910, third, woman suffrage campaign. At the 1909 W.C.T.U. Black Hills District Convention, she addressed members on "Woman Suffrage" and became the organization's "Legislation and Franchise" officer. The pro-suffrage editor of The Daily Deadwood Pioneer-Times heard her speak in the local Baptist Church; he reported, "she talked sensibly" and "looked serious and appropriate" in her "minister's robe." Pettigrew had argued in part "there is neither male nor female; for ye are all one in Christ Jesus" and that "the women who love their homes most . . . want the ballot most." Pettigrew's career placed her among those "women whose work enable them to get out" to argue "women really want the ballot." The 1910 referendum lost badly and led to the reorganization of the SDESA.

Pettigrew grew more active in 1911 after the organization of a new South Dakota Universal Franchise League (SDUFL). This League shifted away from earlier tactics that combined temperance and voting rights advocacy to focus solely on "Votes for Women" (much to the consternation of many South Dakota suffragists who nevertheless continued to work as actively for Prohibition as they did for suffrage). During the summer of 1912, Pettigrew assumed the position of director of SDUFL's Northwest regional district but had to resign in early 1914 "on account of illness in the family." Nevertheless, she continued to work on behalf of the state's 1914 (unsuccessful) universal woman suffrage referendum. Pettigrew served on the League's Advisory Committee for the 1916 referendum and as Butte County Chairman and convention delegate. She toured the Black Hills for suffrage in a "Flying Squadron" with fellow Congregationalist minister Katherine Powell of Spearfish and national organizers, including Emma Smith DeVoe, former resident who worked in 1890 on behalf of South Dakota's first woman suffrage referendum. They visited Rapid City, Hot Springs, Deadwood, Lead, Spearfish, Belle Fourche and Sturgis, distributing literature and holding "street meetings." She was on hand in Huron when the League convened following yet another defeat; members voted to pressure the state legislature to pass another suffrage resubmission, which it did for the electorate to vote on in 1918.

Throughout 1917, Pettigrew served as the president of the Butte County Universal Suffrage League but early in 1918, suggesting weariness, she wrote Mamie Pyle, president of SDUFL, that she had resigned as president of the Butte County outfit, explaining, "I have concluded it will be best for the cause to put in a new President here. It is a great mistake in my opinion for one to stay in an office too long, as there is always someone else who can do as well, or better." In May, Pettigrew tried to resign from the county league again and also from the general state SDUFL advisory board. While sympathizing with "all the demands of war work," Pyle asked Pettigrew to reconsider. Pettigrew appears to have remained active to some degree through South Dakota's this-time-successful 1918 referendum on citizenship-based voting rights. Clearly, however, Pettigrew had decided to devote herself more to the Great War effort. Without pay she served as Butte County Chair and Food Administrator of the state's Women's Committee Council of National Defense and rallied the state's "Feminine Power" to support the U.S. at war, thus supporting a secondary SDUFL goal. She had attended the November 1917 meeting at which the League passed a resolution to condemn the "willful women in Washington, known as the 'pickets'," affirm the organization's affiliation with the National American Woman Suffrage Association, and communicate its belief "every woman should lend her patriotic and active allegiance to the United States in time of trouble."

By1926, Nina Pettigrew and her husband had relocated to South Pasadena, California. She remained active in ministerial work, registered to vote as a Republican in 1932, and advocated publicly for old age pensions in 1935. Nina Dalton Pettigrew passed away in California on 9 September 1940, eight years after her husband. Over her career as a Congregational minister she officiated at some 800 weddings, including her grandson's in 1936. 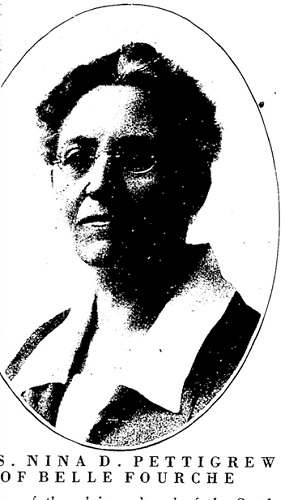