In 1922, Alice Lorraine Daly became South Dakota's first woman gubernatorial candidate; she began her political career as a suffragist. Daly was born into an Irish Catholic family, headed by George Daly and Mary Egan Daly, on 11 February 1883 in St. Paul Park, Minnesota. She spent some of her early years in Cottage Grove, Minnesota and had three sisters and three brothers. Daly earned a BA and MA from the University of Minnesota in Minneapolis. She also studied at the Emerson College of Oratory Expression and Physical Culture in Boston. In 1913, she called off an engagement to Idaho Senator James Brady and remained single the rest of her life. By 1915, she headed the Department of Expression at the South Dakota Normal School at Madison. Daly also chaired the Women's National Peace Party in 1915, and Jane Addams appointed her to be delegate for South Dakota at the International Congress of Women in The Hague in April 1916. Locally, she presented lectures on "Peace" and read dramatic pieces written by students in the American School Peace League. A "dynamic performer," according to one news report, Daly became "the best lady speaker in the state."

Daly played her most extensive role in South Dakota's woman suffrage movement in the successful 1918 referendum campaign. South Dakota Universal Franchise League (SDUFL) president Mamie Pyle and National American Woman Suffrage Association (NAWSA) field organizer Marie McMahon hoped to test their "plan of work" in Daly's Lake County and felt "a great deal of joy" over her initial organizing. Lake County contributed more financially to the state organization than its assigned allotment. Daly made sure the county's newspapers supported woman suffrage and printed pro-referendum material sent by NASWA. As debt bloomed at state headquarters, Pyle hired Daly to fundraise during the summer, which Daly did in addition to publicity work for the Madison Normal School. Daly told Pyle she was "simply wild to help in a substantial way the South Dakota women get the vote." She spoke to farmers, bankers, and businessmen in small towns. She started mini-campaigns among teachers, stenographers, bookkeepers, and newspaper women. Daly continued to raise money even as Madison Normal School transformed its "Girl's Dormitory" into an Influenza Hospital, and she volunteered as a nurse. Lake County gave woman suffrage 63.6% support.

By summer of 1919, Alice Lorraine Daly had been appointed chair of the state's new League of Women Voters' department for the "Protection of Women in Industry." In this position she urged teachers to unionize and argued for "equal pay for equal work." She also lectured on "Democracy and Education" and took part in a mock election sponsored by the Minnehaha Franchise League and Woman's Alliance in Sioux Falls "to show the new voters the process required to take advantage of their citizenship" and "to demonstrate the methods used in voting." She attended the 1920 convention of the League of Women Voters in Chicago.

Daly ran for the office of State Superintendent of Public Instruction in 1920 as a Nonpartisan League (NPL) candidate. However, in October, she resigned from her teaching position at the Madison Normal School in protest over the political dismissal of another teacher. During the campaign, she ripped into the state's Republican lawmakers "for the fact that South Dakota ranks thirty-second in education while North Dakota ranks sixteenth." She spoke about the unfortunate economic system that forced farm families to take their children from school so they could labor for money for the home. She argued for "a more thorough system of education" and for change in the "economic system." Daly lost the election.

The 1920 campaign became Alice Lorraine Daly's start in party politics for the Nonpartisan League and farmer-labor party coalitions. In 1921 she spoke at a Nonpartisan League picnic at which a fundraiser netted several hundred dollars for the "ladies auxiliary" for use to educate "the new women voters of South Dakota" on politics and economics. In 1922, Daly became the first female to run for governor of South Dakota on a Nonpartisan League ticket; she had the support of many farmers and Sioux Falls had a "Daly for governor club." She appeared at the South Dakota State Federation of Labor's third annual convention. She criticized the labor conditions at the state-owned coal mine and spoke up for striking railway shopmen in their "right of assemblage and free speech." She also supported old age pensions. By 1924 Daly chaired South Dakota's Farmer-Labor Party from a headquarters in Mitchell. She headlined the "national farmer-labor progressive convention" in St. Paul, Minnesota, where she spoke against "militarism" and for farmers and laborers, saying, "Let us go not where practical politics lead us but where humanity calls us." That year, she chaired the Farmer-Labor convention in South Dakota, but in an attempt at fusion, the state's Democrat Party nominated Daly for U.S Representative, which she declined. Daily moved to Sioux Falls where she continued to chair the Farmer-Labor Party.

By 1930, Daly lived in Aberdeen and worked as publisher of an Aberdeen newspaper. She also managed "the Daly apartments." Alice Lorraine Daly died in 16 October 1945. Local newspapers mourned her as "a flaming firebrand in politics" who "fought for the principles in which she believed with courage, vigor, and resourcefulness." 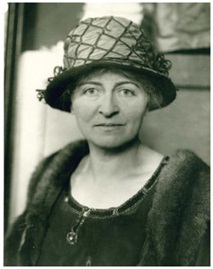 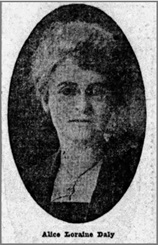