Rose O'Neill was born in Wilkes-Barre, Pennsylvania June 25, 1874, one of seven children to William Patrick O'Neill, a bookseller and Alice Cecilia Aseneth Smith, a schoolteacher. O'Neill's marriages to Gray Latham (1896-1901) and Harry Leon Wilson (1902-1907) both ended in divorce.

At the age of four, Rose and her family moved from Pennsylvania to Omaha, Nebraska where she was raised at the poverty level. Rose and her siblings attended elementary school at Sacred Heart Academy. She was often homeschooled. Rose spent much time at the Omaha Public Library where she studied art, literature, and anatomy and thereby taught herself to draw. At the age of thirteen, she won a children's art contest that propelled her art career. She never graduated from high school.

In 1893, her parents moved to the Missouri Ozarks where they homesteaded land that Rose named "Bonniebrook." That same year, Rose moved to New York City where she met with art editors of the major publishing houses. Most of her drawings sold at each meeting.

In 1897, Rose was hired by Puck Magazine, a satirical publication, as the first woman cartoonist on its all-male staff and remained the only woman staffer for six more years as she produced over 600 illustrations. To hide that Rose was a woman artist, Puck editors requested she only use her initials or last name as signature for her art. Eight years later, Puck's editorial was published, "Among American illustrators, one would be hard to find who has been more widely discussed than O'Neill, for time and again has the question been asked "Is O'Neill a man or a woman?" No modern worker ever sprang so quickly and surely into popularity as she. 'She,' because O'Neill is a woman."

O'Neill's illustrations, short stories, and poems, were purchased by over fifty national magazines and for over 40 published books from the 1890's to 1943. She also wrote and illustrated four novels, a book of poetry, and seven children's books between 1904 and 1936.

Between 1909 and 1937, Rose's philanthropic Kewpie character appeared in her illustrated stories published by various magazines and newspapers. Due to the popularity of the Kewpie, it would be in the forefront during Suffrage giveaways and advertising.

In 1914, Rose moved to an apartment in Washington Square which was known as a "Hotbed" for the suffrage movement. There she joined as a participant in many suffrage activities. Starting in 1914, her suffrage art appeared on post cards, posters, and flyers for the National American Woman Suffrage Association (NAWSA).

In January 1915, Puck Magazine's suffrage issue included two O'Neill illustrations. Subtitles "Our food, our health, our home, our schools, our play are all regulated by men's votes" and "I'm a girl baby and I'm going to be taxed without representation."

In 1915, Rose was featured in many articles, not only related to women's suffrage, but also a Polymuriel contest about the freedom of women's clothing. Rose commented, "This movement for a universal garment is one of the worthiest outgrowths of women's liberty of thought. When we are as far from the burden of clothes as men are, we may equal or even surpass them in great world achievements. At present we hobble through our tasks and are incalculably handicapped in their performance. Men have been making clothes for us. It is time that women furnish them. This is the beginning."

A New York Tribune article by Doris G. Fleischman caught the attention of many readers with the title, "Woman's the Virtues, Man's the Stupidity, Is the Division the Gentle Inventor of Kewpies Makes." Fleischman commented, "You wouldn't expect this from her mouth," "Man has made and ignorantly kept woman a slave. Woman is a sheep woman, placidly convinced of her unalterable sheepishness. For centuries she has borne the greatest insult of the world, but she is now to be emancipated. Now is the time when every young woman may enter any profession she likes."

Throughout 1915, O'Neill participated in activities such as the Macbeth Gallery fundraising exhibit "Woman's Art for Suffrage Cause" which included 90 women artists supporting women's suffrage. She was listed under sculptors in the catalogue for her Kewpie. She was found decorating the Children's Van with Kewpies, Hopping in the "Hopperie," along with Mrs. Norman Whitehouse and "General" Rosalie Jones at Luna Park, Coney Island, and utilizing her "Together for Home and Family" poster on a sandwich board to encourage voting. On the corner of Broadway & Forty-Second Street in New York City, Rose held a exhibition featuring two of her suffrage posters, one featuring Kewpies, "We are for suffrage. So is President Wilson" and her serious poster, "She Prepares the Child for the World. Help her to help Prepare the World for the Child." O'Neill was listed as a participant in the October 24,1915 suffrage parade along with Mrs. Norman Whitehouse. 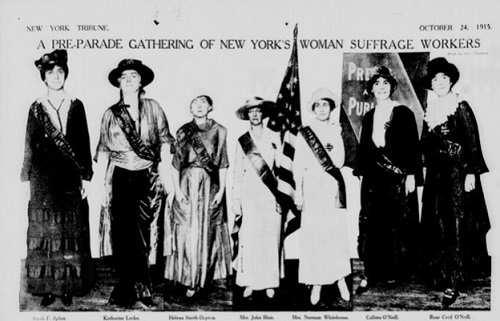 One of Rose O'Neill's Posters, 1915. Credit: National Woman Suffrage Publishing Co. Inc. From the Archives of The Rose O'Neill Foundation. 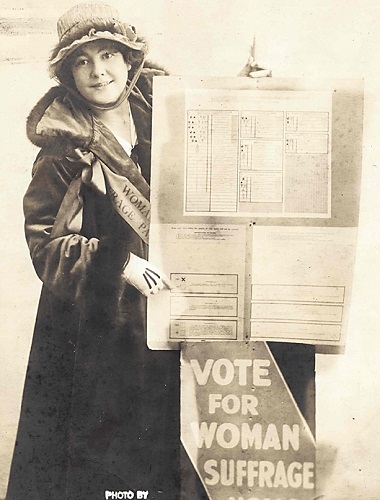 "Vote For Woman Suffrage Nov 2, 1915." Photo Credit: From the Archives of The Rose O'Neill Foundation.

In 1916, Woman Voter asked her to draw something special for their suffrage pamphlet, Better Babies. Her drawing was later used as a NAWSA poster. She was also included in the October supplement issue of ILLUSTRATED MILLINER as one of the "Notable American Women Prominent in Suffrage" posing in their fall millinery. She sold tickets with other suffragists at men's hat stores for the June 3 fundraiser "Suffrage Day on the Diamond," at the Giants-Reds game at the Polo Grounds.

On October 26, 1917, Rose journeyed with fifty New York state officers and workers to D.C. and returned to NY that evening. The very next day was the Suffrage march that was a much more solemn occasion than the 1915 march as no fancy hats were allowed this time. Black was the norm, with a special "Black parade hat", black shoes and hose. The women in industry section was divided into many trades. O'Neill carried an "illustrators" banner indicating she represented women artists.

O'Neill's suffrage activism appears to have ended when New York state women won the vote in November 1917. Her work as a cartoonist and illustrator dominated her life in succeeding years but O'Neill continued to be involved in supporting women in their various endeavors.

The Galerie Devambez, located in Paris, held an exclusive 1921 exhibit of O'Neill's paintings, drawings, and sculpture. The next year, the same exclusive exhibit was held at the Wildenstein Galleries in New York City. In 1921, O'Neill acquired the home, Villa Narcissus, on the Isle of Capri, Italy, and in 1922, she purchased a home in Saugatuck, Connecticut, naming it Carabas. During this early time at Carabas, she created her major nine-foot limestone sculpture, "Embrace of the Tree," currently at Bonniebrook. Carabas became an enclave for writers, artists, and dancers. O'Neill had always supported her large family, but also many of those in the arts. While at Carabas, she became involved in the annual Exposition of Women's Arts & Industries in New York City. Her art appeared on the front cover and inside pages of their programs during the years from 1924-1929. A favorite piece, named "Progress" from their 1925 program cover reappeared, after her death, on the 1949 program cover. Her art inside their 1928 program was titled "The prophetic soul of the wide world dreaming on things to come."

O'Neill travelled between her homes in New York, Connecticut, Capri, Italy, and Bonniebrook. Because of O'Neill's compulsive generosity to others, she slipped into poverty. In 1937, Bonniebrook became her only residence and permanent home. O'Neill died in Springfield, Missouri, April 6, 1944, and interred in the O'Neill Family Cemetery on the Bonniebrook Homestead, Walnut Shade, Missouri. 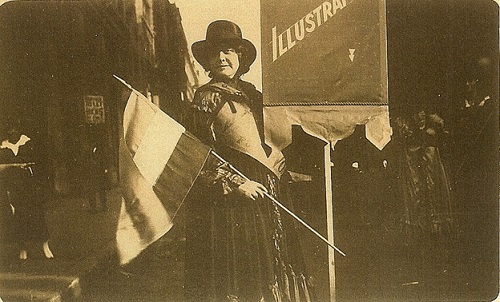 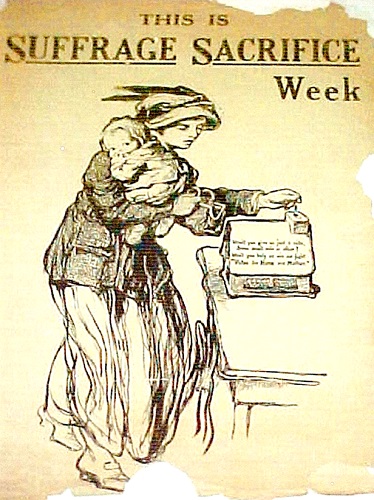 "Suffrage Sacrifice Week" 1915-1917. Poster Credit: From the Archives of The Rose O'Neill Foundation. 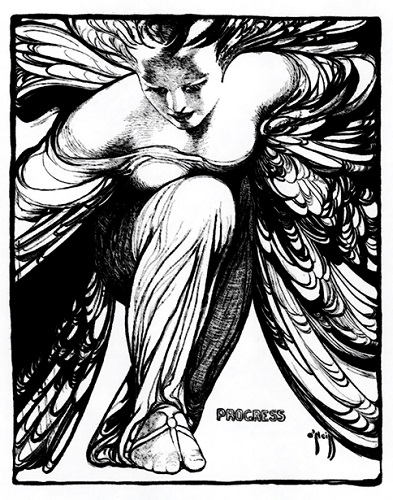 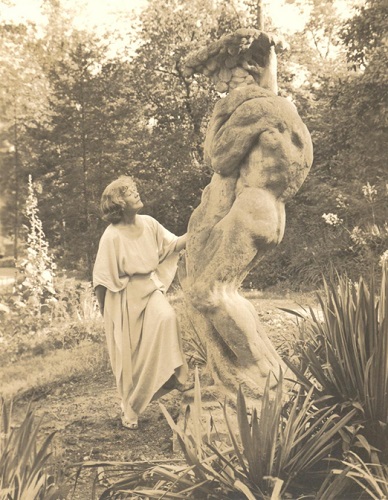 Edwards, Dave and Vernon Jordan. "A Bibliography of the Works of Rose O'Neill. N.p.: Privately printed, 1998.

Omaha Sunday Bee Magazine (May 2,1915) "Wanted! Ideas for Sensible Clothes for Women -- Miss Rose O'Neill will Be a Judge of the Sketches for the Universal Gown for women."

The Evening World (September 29, 1915) "Women's Art for Suffrage Cause a Fine Exhibit."