Cora Mitchel was born in 1847 in Little Compton, Rhode Island, the third of seven children born to Sophie Taylor Brownell Mitchel of Providence, Rhode Island, and Thomas Leeds Mitchel of Groton, Connecticut. Prior to the Civil War, the Mitchel family's primary residence was in Apalachicola, Florida; their summer home was in Bristol Ferry, a neighborhood in Portsmouth, Rhode Island on Aquidneck Island. Ancestors in the Mitchel family were among the first European settlers in Portsmouth in 1638. In Florida, Thomas Mitchel worked as a cotton merchant and owned enslaved people. In 1916, Cora Mitchel published an account of her life in during the Civil War, Reminiscences of the Civil War. In it she downplayed the family's involvement with slavery, claiming that her father did not believe in slavery and "owned only three [slaves], and they had come to him imploring him to buy them, as otherwise they would be sold in the open market. They were faithful, valuable servants, and became real members of our family." Early in the war, the family sent Cora to Columbus, Georgia, to live with her sister, Floride Mitchel May, and attend school. The Confederate Army seized her brother, Colby, from school and conscripted him. Later, while on a medical leave, Colby deserted the army and the family spirited him to the North. From that point on, the Mitchels made Bristol Ferry their primary residence. Cora Mitchel was a musician, music teacher, and poet, lived as a single woman with her family members, and became an active suffragist.

Mitchel's first documented involvement with the suffrage movement came in 1907 when she founded the Newport County Woman Suffrage League in Rhode Island. She had previously been active, though, at an unknown date in the Brooklyn Woman Suffrage Association. Her sister, Sophie, was an artist and lived part-time in Brooklyn, New York where she had an art studio. Cora must have lived with her in Brooklyn on occasion. A 1909 article in The Woman's Journal, a suffrage newspaper, referred to Cora Mitchel as "an old Brooklynite and former member of [the Brooklyn Woman Suffrage Association]." (Note: Her name is frequently misspelled as Cora Mitchell in the suffrage accounts).

Mitchel founded the Newport County Woman Suffrage League in 1907 with eight members, composed of friends and neighbors from the small neighborhood of Bristol Ferry, including Sarah J. Eddy, Emeline Eldredge (Mrs. John Eldredge), and Mary Ballou (Mrs. Barton Ballou). At the League's first meeting, Julia Ward Howe, noted author and Newport suffragist, attended and her daughters, Maud Howe Elliott and Florence Howe Hall, later became members and officers. Mitchel recruited family members into the League with her sister, Sophie Mitchel, serving as treasurer and her niece, Clara Miller (Mrs. Oscar Miller) as a vice president at various points. Cora and Sophie Mitchel frequently hosted League meetings at their home. Alva Belmont, a noted socialite and member of the Vanderbilt family, spent summers in Newport and became an active supporter of the Newport League, including leasing its first official headquarters in 1912. From its start with eight members in 1907, by 1913 the Newport County League had ninety members and had spread to the entire Aquidneck Island, including the towns of Portsmouth, Middletown, and Newport. The History of Woman Suffrage heralded the Newport League as one of "the nerve centers of suffrage activity in Rhode Island."

Mitchel served as president of the Newport League from 1907 to 1912. In 1909, the organization voted to affiliate with the Rhode Island Woman Suffrage Association (RIWSA), a branch of the National American Woman Suffrage Association (NAWSA). Mitchel gave speeches, hosted social events and a RIWSA event, and held suffrage booths at local fairs, disseminating suffrage information and literature. She tirelessly recruited new members, including her colleagues from the St. Paul's Episcopal Church and the Sunshine Club. A 1912 article in The Woman's Journal noted that she "converted practically all of the women of her community, besides others in the county not resident of Bristol Ferry." Mitchel was one of five Rhode Island delegates to the 1911 NAWSA convention in Louisville, Kentucky. From 1911 to 1917 Mitchel was elected as one of the Rhode Island vice presidents of the New England Woman Suffrage Association. In 1915, in addition to her membership in the Newport League and the RIWSA, Mitchel belonged to the newly-formed Rhode Island branch of the Congressional Union, Alice Paul's organization dedicated to passing a federal constitutional amendment.

In 1912, Mitchel requested that Maud Howe Elliott assume the presidency of the Newport County Woman Suffrage League. The following year, Elliott honored Mitchel's contributions to the League, stating that "the faithful few of the Old Guard who have stood staunchly beside their leader, Cora Mitchell [sic], who started and for years carried on the work in Newport County almost single-handed." Mitchel served as a vice president of the league until 1917 and was later named its honorary president.

Mitchel actively engaged in political lobbying as a suffragist. In 1914 she sponsored and signed a petition for woman suffrage that was sent to the United States House of Representatives. Locally, in February 1914, Mitchel participated in a political effort in which "Woman suffragists stormed the State House...and made a verbal assault upon the members of the General Assembly." The suffragists "buttonholed" members of the government, confronting them in the State House's corridors, stairs, and elsewhere to promote the cause of woman suffrage in general and a presidential suffrage bill in particular. In 1919, as the ratification of the suffrage amendment drew closer, the Newport League passed a resolution urging the Rhode Island governor to call a special session of the General Assembly to ratify the amendment. Following the resolution, Mitchel met with a state senator and representative from Portsmouth to encourage them to support the special session. In addition, she and a large group of suffragists attended a 1919 meeting with the Rhode Island governor to lobby him on the special session; the group was photographed with the governor on the steps of the Rhode Island State House.

By 1925, Mitchel had moved to Pasadena, California. She died at her home there on January 2, 1929 at age eighty-one. Her ashes were buried in the family plot in St. Paul's Cemetery in Portsmouth, Rhode Island. In its obituary of Mitchel, The Providence Journal called her a "pioneer suffragist." 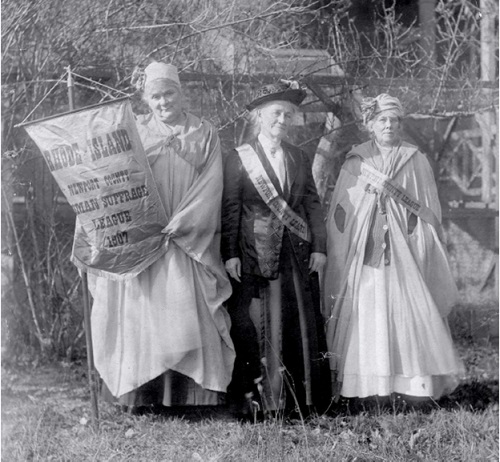 Gloria Schmidt, "Maud Howe Elliott (1854-1948): The Suffragist Who Had to Get Her Citizenship Back," Portsmouth History Notes, https://portsmouthhistorynotes.com/2020/03/05/maud-howe-elliott-1854-1948-the-suffragist-who-had-to-get-her-citizenship-back/.

Journal of the House of Representatives of the United States Sixty-Third Congress Third Session (1915), 65.