Bernice Secrest was born in Frankfort in Ross County, Ohio, on March 22, 1880. She went to public high school for three years in nearby Chillicothe, from which she graduated in 1898. From there, she traveled 75 miles north to Delaware, Ohio, where she attended Ohio Wesleyan University. Bernice completed her education at prestigious Smith College in Northampton, Massachusetts, graduating in 1902.

Upon finishing at Smith, Bernice traveled back west and settled for a while in Tuscola, Illinois, and later in Chillicothe, where she taught high school mathematics. In 1906, Bernice Secrest married Arthur B. Pyke, who had been born in China where his parents were missionaries. Bernice and Arthur eventually settled in Lakewood, Ohio, near Cleveland.

From 1917 to 1931, Bernice Pyke served on the Lakewood Schools Board of Education in Cleveland, Ohio. Originally appointed to her seat on the board in August of 1917, Mrs. Pyke was subsequently elected to the position in 1920. Interestingly, her father, Samuel Frederick Secrest, was also a successful teacher in the public school system in Ohio, as well as a superintendent of public schools.

The issue of suffrage for women had been a long-standing issue nationally, bubbling to the surface as far back as 1848. Two statewide ballots in Ohio—in 1912 and 1914—that would have given women the right to vote were rejected. A statewide referendum in 1917 to allow women to vote in the presidential election also failed. But in 1917, a push by suffragists including the Lakewood Women's Suffrage Party and its president Bernice Pyke to amend the Lakewood, Ohio, charter succeeded, making it possible for Lakewood's women to vote on municipal issues.

Bernice Pyke made national history in 1920 when she became the first woman delegate to the Democratic National Convention. While at the San Francisco convention, Mrs. Pyke worked diligently in support of Ohio Governor James Cox, who was seeking the presidential nomination and was opposed by former Treasury Secretary and Woodrow Wilson son-in-law William Gibbs McAdoo. Cox won.

Unfortunately for Mrs. Pyke and the Democrats, the ticket of James M. Cox and Franklin D. Roosevelt lost in a landslide to the Republican ticket of Warren G. Harding and Calvin Coolidge.

Although the 19th Amendment had been ratified months before the election, giving women the right to vote for the first time, only 36% of eligible women did so, compared to 68% of eligible men. It has been speculated that this low turnout among women may have been due to various barriers such as poll taxes and residency requirements as well as women's unfamiliarity with the voting experience.

Subsequent to this resounding defeat, in February of 1921, the Democratic Party, under the leadership of chairman George White, embarked on a reorganization. White appointed an executive committee to study the matter and to advise the party as to what changes should be made. Among the several women appointed to this committee was Bernice Secrest Pyke.

About a week thereafter, however, a rift in the party developed when a petition, signed by a majority of the Democratic National Committee (including Pyke) was presented, asking for a reorganization meeting on March 1, the apparent goal of which was to oust chairman White. When the party's eminence grise, William Jennings Bryan, "threw cold water on the scheme," some who had signed on backed out. Mrs. Pyke was one of those who withdrew from the effort, claiming "she had signed the petition under a misapprehension."

In 1922, Mrs. Pyke ran for state senate. She lost. She also ran for mayor of Lakewood, an office she also failed to win.

In 1923, Democratic women held several regional conferences to organize women to work for a Democratic victory in 1924. The meetings were to "be followed by three-day schools of democracy" to teach women public speaking and organizing techniques ahead of the presidential election. Bernice Pyke was in charge of the Cleveland conference. Despite the best efforts of the women, however, the Democratic ticket was again defeated in a landslide, with Calvin Coolidge beating John Davis 382 electoral votes to 136.

In the run-up to the 1928 presidential election, Mrs. Pyke put herself forward as a candidate for vice-chairman of the Democratic National Committee, responsible for directing women's campaign activities as well as serving as liaison between the men and women of the party and between the leadership and the women of the rank and file. Unfortunately, Mrs. Pyke was to be disappointed again, as the chairmanship was awarded to her competitor, Mrs. Florence Farley of Kansas.

Undaunted by this setback, however, Mrs. Pyke continued her service to the party. In August of 1928, she was chosen by Eleanor Roosevelt to serve on an advisory committee whose charge was to devise ways of appealing to stay-at-home voters and to inspire them to vote in the fall election. As part of this effort, the committee published a list of 12 reasons for women to vote for the Democratic candidate for president, New York governor Al Smith.

While Mrs. Pyke worked on behalf of the Democratic Party, she also served as a Cuyahoga County elections commissioner for the 1928 contest. In the August Oho primary, a discrepancy of 10,000 votes in the senate race was discovered, throwing doubt on the validity of the ballot. A grand jury was convened by the state's attorney general, Edward C. Turner. The grand jury's report recommended that all electors—except Bernice Pyke—be removed, along with all their staff. The Secretary of State, Clarence J. Brown, disagreed and sacked the entire elections commission, including Bernice Pyke, yet another setback.

In the 1932 presidential election, she promoted the candidacy of Ohio governor George White, but White lost the nomination to Franklin Delano Roosevelt. This might have spelled the end of Bernice Pyke's political life, but Roosevelt, the ultimate victor in the presidential contest, appointed Pyke to the post of revenue collector for the port of Cleveland. This appointment was accompanied by an order from President Roosevelt that anyone appointed to a government job could not also hold office in the DNC or any political organization. Thus, in September of 1934, Mrs. Pyke resigned her position with the DNC, but she remained director of customs collections until her retirement in 1953, in which position she served presidents Roosevelt, Truman, and Eisenhower.

All her life Mrs. Pyke was an exemplar of civic engagement and activism. In addition to her political work, she devoted 8 years to the chairmanship of the literature committee of the Ohio Federated Clubs and 4 years to the chairmanship of the literary department of the Cleveland Sorosis, an organization founded in 1891 focusing "on women's growing sense of power to change themselves, their condition, and society." Her literary bent extended to ownership of a Cleveland bookshop, Bernice Pyke's Book Shop Company. She was the first female cabinet member of the City of Cleveland. During World War I, Mrs. Pyke served as secretary of the Woman's Committee of the Council of National Defense while also spending 18 months in charge of an Americanization center. She also served as the only woman on the executive committee of the Liberty Bond campaign and as a traveling speaker for the National League of Women Voters. Her energy seemingly inexhaustible, she founded the Lakewood Hospital and the Lakewood Public Library.

Bernice Secrest Pyke of Cleveland, Ohio, known for her "ability, poise, and gracious personality," died at home on May 10, 1964 and was survived by her only son, John. In the summer of 2020, Mrs. Pyke's home town of Lakewood re-named one of the city's green spaces Bernice Pyke Park. She is buried in Lake View Cemetery in Cleveland. 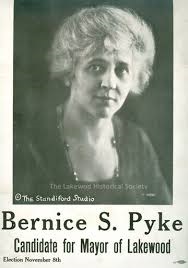 "Biography of Mrs. Bernice S. Pyke." From History of Cuyahoga County and the City of Cleveland By: William R. Coates. The American Historical Society, Chicago and New York, 1924 http://www.onlinebiographies.info/oh/cuya/pyke-bs.htm.