LINK to another sketch about Edith Silver

Edith Stokes was born into a Quaker family in Germantown, Pennsylvania. She attended the Germantown Friends' School and participated in social events at the Belfield Club and Evening Horn Club. The family spent summers at "Meadow Farm" in Harford County, Maryland. Our Silver Heritage, a Silver family history, recounts that "Meadow Farm" was filled every summer with both cousins and local young people. It was during one of those summers that she met William Silver. From a prominent Darlington farming family, Silver worked in the lumber business. In 1897 the couple married and moved to West Virginia where Silver was the bookkeeper at the Cheat River Lumber Company.

After one year in West Virginia, the Silvers returned to Darlington where William took over the management of the family farm, "Vignon." Mrs. Silver, mother of a growing family, was an active member of the social scene, serving as a chaperone at the community events and participating in the Darlington Reading Club. In 1905 the young family moved to Aberdeen, Maryland where William formed Strasbaugh-Silver & Company and established himself as a leader in the canning industry. They kept their Darlington Farm, which had been rebuilt after a devastating fire in 1902, as their summer retreat.

Even as she maintained her ties in Darlington, she quickly became active in the Aberdeen community during the Fall and Winter Months. The Aegis reported in February 1906 that Mrs. Wilson had attended "The Round Table" meeting in which she read a paper on "Our Presidents." The next year, she performed a comedy with a number of other Aberdeen ladies in an entertainment sponsored for the Aberdeen Library. In 1910, she hosted a meeting in her home where she helped to organize a "Mothers Club."

By 1915, Edith had joined the Just Government League of Harford County where she served as a hostess for the Prairie Schooner when it traveled through the county in July 1915. The Prairie Schooner Campaign was one of the more creative attempts of the Maryland Just Government League to raise awareness of and support for woman suffrage. Maryland Suffragists conducted three campaigns across the state travelling in a horse-drawn wagon.

Mrs. Silver was also active in the suffrage movement at the state level. In 1918, she was one of two women who represented Harford County at the first annual state convention of the Woman Suffrage League in Baltimore. During the convening, she was elected Second Auditor of the organization. Her activism at the state level continued into 1919 when she served on a committee that united the multiple Baltimore and Maryland suffrage organizations in their campaign for the Maryland ratification of the Federal Woman Suffrage Amendment. The committee was very optimistic about the potential success of their efforts when they met in Baltimore in December 1919.

Undeterred by the failure of the Maryland General Assembly to ratify the 19th Amendment, Mrs. Silver continued to fight for women's rights. She became an active member of the League of Women Voters (LWV) where she represented Maryland at the national convention in 1920 and was elected to be the Director from the Second Congressional District for the state. At Thanksgiving that year, Mrs. Silver joined the Maryland League of Women Voters in signing a proclamation thanking all of those who had worked to fearlessly urge a "hostile Legislature to consider the enfranchisement of the women of Maryland." In addition to her work with the state LWV, Mrs. Silver was a charter member of the Harford County branch of the league, hosting meetings at her home.

Edith Silver did not limit her activism to suffrage. During World War I, she represented Harford County in a meeting of all of the Women War Workers in Maryland and she was a member of the committee of women that continued Red Circle work in Harford County. That committee brought War Camp Community Services (WCCS) to Aberdeen in order to provide entertainment for soldiers stationed at Aberdeen Proving Ground and Edgewood Arsenal. Years later, in January 1941, Mrs. Silver was the Harford County representative to the Baltimore meeting of the Women's International League for Peace and Freedom. Representatives from that meeting sent President Roosevelt a letter stating their concerns about the Lend-Lease Program.

Mrs. Silver also continued her involvement in local affairs. As a supporter of the Aberdeen Branch of the Harford County Public Library, she continued the literacy efforts that she began as a young married woman. Additionally, her obituary noted a number of other accomplishments including that being a member of the Women's Christian Temperance Union, an organizer of the Darlington Lions and Evergreen Garden Clubs, and that she was responsible for the first Negro Homemakers Club in Harford County.

Edith Silver and her husband had six children, one daughter and five sons. Mrs. Silver died in a Baltimore hospital in 1949. She is buried in the Darlington Cemetery. 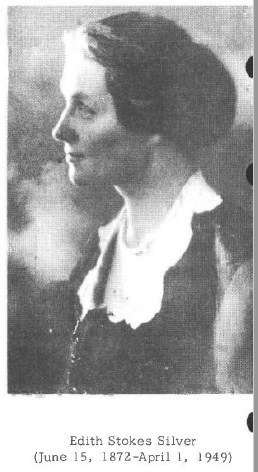