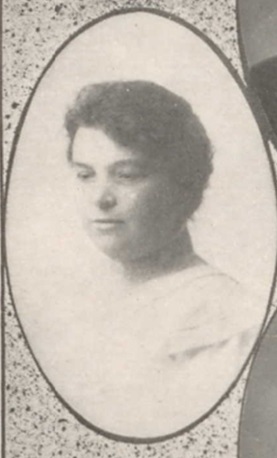 The youngest of Edward DeLay and Mary Sabilla Beisel DeLay's three daughters, Dora Carver DeLay was born in Lima, Indiana in 1873. Neither Dora nor her oldest sister Etta ever married, but both devoted their lives to education and various social causes. Their middle sister, Rosa, married a widower, Harmon George Harting, in 1909.

Dora and Etta both attended Indiana University, where Dora was listed as a mathematics major in IU's 1897 catalog. She earned a bachelor's degree in mathematics and was hired as a language instructor at Howe Military Academy in her hometown, while Etta worked as a high school teacher and principal. Their mother, called a "Well-Known Lima Lady" in her obituary, died in 1908. In 1910, Etta accepted a teaching position in Chandler, Oklahoma. The next year, Dora and their father, Edward, followed Etta to Chandler, where Dora also secured a position as a high school teacher. Edward, Dora, and Etta spent summers at their home in Indiana and winters in a home leased from the local Episcopal church in Chandler, Oklahoma for several years between 1910-1915. In 1914, Etta wrote the following to Indiana University's alumni organization on behalf of herself and her sister: "We are enjoying our work in the very highest degree. The beautiful winters, and the daring and progressive spirit of Oklahoma, are certainly fine."

"The Misses DeLay," as they were referred to in the local newspapers, were quite active in the Chandler community. They organized and chaperoned school activities and became beloved educators. They participated in the Oklahoma State Teachers' Association, where Dora frequently gave talks and read papers. Dora was an Oklahoma delegate to the National Education Association's 1922 meeting in Boston, Massachusetts.

The Chandler Tribune reported in January 1912 that following the announcement of the establishment of a debate club for boys, Dora announced the organization of a girls' physical exercise club "not to leave the girls out in the cold." Club members reported, "Miss Dora takes her stand on a chair so as to better supervise the work and to begin to teach us how to stand and to breathe."

When the Oklahoma Women's Suffrage Association, a NAWSA chapter, held its October 1914 meeting in Chandler, Dora was elected its Corresponding Secretary. In May of the following year, both Etta and Dora tendered their resignations to the Chandler school board, much to the students' and parents' dismay. Although newspapers from the time do not clarify the reasons for the DeLays' resignations, local parents signed petitions "praying the board retains the Misses DeLay."

Dora, Etta, and their father moved to Muskogee, Oklahoma, where Dora taught Latin at Muskogee High School, was instrumental in reviving the Muskogee chapter of the Girl Scouts, and was a member of the Muskogee Women's Noonday Club. She was also elected Vice-President of the Business and Professional Women's Club. In 1920, Dora served as a hostess at the Democratic party booth at a local fair reported in a Muskogee newspaper. Dora and Etta spent the summer of 1922 taking classes at Columbia University. The sisters frequently hosted Indiana University alumni gatherings in Muskogee and were guests at a meeting of the American Association of University Women, hosted by the association's president, Mrs. C.W. Turner, in Muskogee in 1925.

In 1926, Muskogee newspapers reported that Dora had accepted a teaching position at "a college in Dallas." She and Etta moved to Dallas, Texas, where their sister Rosa was living at the time. Dora later taught at the Texas Country Day School for Boys in the 1930s. By 1945, the sisters, including Rosa, then a widow, retired to Florida. Dora continued to be active with the League of Women Voters there. She died in Lakeland, Florida in 1954. In her will, Dora left $250 to Elwood (Indiana) High School "to be used for no specific purpose." Dora, Etta, Rosa, and their mother and father are buried in the same plot in Riverside Cemetery in Howe, Indiana.