Alice Verminia Beitmen Heaney (also known as Mrs. A.S. Heaney) was born June 8, 1863, in Pontiac, Illinois to parents David M. Beitmen, a Pennsylvanian architect of German descent, and Frances Ullery Beitmen, a native of Ohio. She had one older sister, Mary Belle Beitmen (later Mary Belle Kerr), and four younger brothers: Grant A. (died in infancy), Charles Edward, William, and Nathan. In her native town of Pontiac, she grew to young womanhood, receiving a high school education. She then attended the Cook County Normal School, a teacher-training college in Chicago. She taught in Illinois public schools for four years and was appointed principal of the local high school. In 1888, Alice moved to Eldorado Springs, Missouri. She became assistant principal of a local school while living there for one year.

At the opening of Oklahoma in 1889, she and her brothers Charles and William decided to move out to Oklahoma Territory. Alice secured a claim close to her brothers' claims near the town of Britton. She later wrote an essay about the experience, entitled "How a Woman Took A Claim." In the essay, she described camping alone on the prairie and posting notices on stakes that she drove with her own hands. She was hesitant to attempt to file a land claim because the chances that she would be approved were extremely remote but despite her initial discouragement, she visited the land office and was given her papers.

While she was living on the claim, Alice heard that there was a saloon selling liquor in Britton. She gathered two of her friends and they began promoting a petition signed by every claim owner in the village. The three women then traveled by horse to the city of Guthrie where the Oklahoma Legislature was in session for the first time and requested one of the Speakers to introduce a temperance bill. It passed and became a law. This was the beginning of a chapter of the Woman's Christian Temperance Union.

Alice Beitmen started working in Oklahoma City, where she took charge of an all-girls school called the Young Ladies Seminary. This school was called a success and she was praised as a superior educator. She also helped to establish the public-school system by 1891. Beitmen and some of her colleagues wrote to a Congressman to Washington, D.C. to have the 160 acres of military land adjacent to Oklahoma City turned over to the city for school purposes.

After this bill passed, a vote was held to approve bonds that would give schools the funds they needed. Alice helped organize other women to vote on this issue, making arrangements to take care of each other's children so that women could go to the polls. According to Alice, the bond issue "would never have passed without the women's vote." This vote preceded the 19th Amendment by nearly 3 decades.

In 1891, Alice was elected principal of the Third Ward school, the largest ward in the city. She was the only woman out of four principals elected. Beitmen served the high school until she received an unsolicited nomination for Superintendent of schools on the Populist ticket. Alice was elected twice to this position and was the first female superintendent in the county. While she was superintendent, Beitmen encouraged Teachers' Reading Circles which gave teachers training and diplomas. Under her direction, work was systematized, and school libraries established in every district in the county.

Alice Beitman's educational career in Oklahoma City came to an end after twelve years when she got married. At the age of 39, on August 10, 1902, Alice married Adelbert Sidnor Heaney, a former real-estate developer whom she had met in Missouri many years prior. She moved to his home in Providence, Rhode Island. She taught penmanship and typewriting at the Rhode Island Community School for five years.

In 1907, the Heaneys moved to Oklahoma City, funding the "New England Apartments" which both served as their residence and made a small income. Alice Beitmen Heaney continued to participate in civic life, being involved with the Women's Relief Corps as well as the Methodist Episcopal Church and the church's youth organization, sometime between 1907 and 1913. She was Legislation Chairman of Committees for the Oklahoma State Federation of Women's Clubs in 1917.

A lifelong believer in women's rights, Alice was very active in suffrage advocacy during this time. For example, she served multiple terms as parliamentarian for Woman Suffrage Association of Oklahoma. She was active in this group in 1917, and was a key player when they passed resolutions condemning militant suffragists who had picketed President Woodrow Wilson at the White House. Alice also actively dissuaded the Oklahoma governor and the mayor of Oklahoma City from introducing National Woman's Party activist Mabel Vernon when she traveled into town to give a speech. Rather, Alice promoted woman suffrage at the other clubs she was a part of, such as the Twentieth Century Club, giving speeches for the cause and asking for the club's endorsement.

Alice Beitmen Heaney lived to the age of 92, outliving her husband as well as all her siblings and parents. She died on June 20, 1954. She was buried at Rose Hill Burial Park in Oklahoma City in the same burial place as her husband. 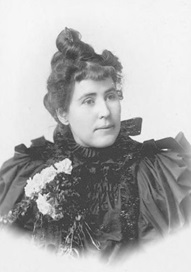 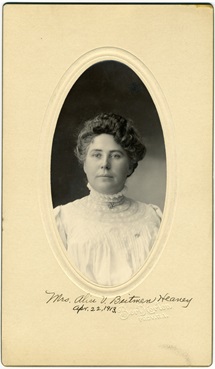 Basic information about family life found in Census records from 1880-1940 on Ancestry.com.

Transcripts from bibliographical interviews can be found at: