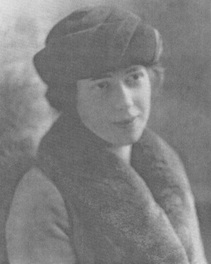 Josephine Miller was one of the original members of the Arkansas Woman Suffrage Association, founded in Little Rock in October 1914. An affiliate of the National American Woman Suffrage Association (NAWSA), the organization brought the local Political Equality League into the framework of the national organization of the woman suffrage movement. Although less well known than some of the Arkansas suffragists, Miller worked steadily in a variety of state and national positions to advance the woman enfranchisement cause.

Born March 6, 1888, in Indiana, the only child of Robert and Louise Miller, the young suffragist moved to Little Rock as a child. In May 1914, Miller and other members of the local Political Equity League organized a National Suffrage Day at the Capital Hotel. The event brought public awareness to the issue and led to the group's joining the national organization. Miller joined other suffragists and several prominent, local men at the podium to call for Arkansas legislation granting suffrage to women.

Miller interrupted her suffrage work to spend time working at an American Red Cross hospital in France during World War I. She later combined her efforts to raise money for the Red Cross hospitals with her suffrage work. The Arkansas Gazette reported on September 3, 1916, that Miller was raising money for the hospitals by sharing her own hospital experiences as she toured the country in her job as a field representative for NAWSA. Miller and her friend Gertrude Watkins traveled around Arkansas and in other states making speeches and organizing women in the fight for suffrage. Miller and Watkins were responsible for helping to establish 60 new local chapters of the Woman Suffrage Association in Arkansas during 1916 and 1917.

When Arkansas women won the right to vote in primary elections, in 1917, the suffragists recognized the need to train women to accept their civic responsibilities as voters. They formed a new political organization, the Equal Suffrage State Central Committee, following the structure of the state Democratic Party. Having had some success in gaining the power of the vote, Miller and her fellow committee members turned their efforts to organizing citizenship training sessions meant to teach women how to register and how to become active in local and state politics. As a member of the new central committee, Miller attended the 1916 Democratic National Convention as one of ten suffragist delegates. In 1920, she was an alternate delegate-at-large to the convention.

The success of the Arkansas campaign led to Josephine Miller's appointment as a lecturer for NAWSA. Miller worked in numerous states promoting the cause for suffrage, including Alabama, Oklahoma, Tennessee, Virginia, and South Dakota. She traveled to South Dakota to work in the state's last (of six) and ultimately successful 1918 woman suffrage campaign. Miller used her experience as a Red Cross nurse to speak to large crowds in support of both the Red Cross and the suffrage movement. In marshalling her wartime service as a nurse, Miller reprised suffragist Emma Smith DeVoe's strategy in the first 1890 SD woman suffrage campaign, when DeVoe linked women's contributions to the Civil War to the reason women deserved the franchise. Miller spoke at churches, but also at unique venues such as baseball games in small towns across South Dakota.

In South Dakota, Josephine Miller worked with Mary "Mamie" Shields Pyle, president of the South Dakota Universal Franchise League since 1911. Miller wrote to Pyle about what a great learning experience she had in the state. Miller also voiced her opinion that "the women are pleasant," but her concern over the men of the state who "do so decline all responsibility" for helping women win the vote. While working in South Dakota, Miller spent a majority of her time traveling alongside Mary Elizabeth Pidgeon, a well-known NAWSA field secretary. One can get a sense that Miller was quite good at her job from a statement the Daily Arkansas Gazette attributed to her: "We were given cordial receptions at each city and at a number of places our initial meeting was largely attended. The second and third meetings, however, always were more largely attended. Some of the leagues organized already have more than doubled the charter membership."

After the passage of the 19th Amendment, the Arkasnas Woman Suffrage Association evolved into the Arkansas League of Women Voters, with the goals of citizenship training and voter registration. Miller became the field secretary of the new organization, setting up and teaching in citizenship schools around the state. In 1921, she was elected as chairman of the Pulaski County League of Women Voters, according to the Arkansas Gazette. In 1922, Miller married Little Rock businessman Fred Isaac Brown. At a testimonial dinner for leading woman suffragist Adolphine Fletcher, in 1966, Miller recalled that she and other women marched for suffrage, "carried banners, and demanded equal rights." She remained active in the Little Rock community until her death in 1972.

An earlier version of the Arkansas portion of this sketch is accessible online as part of the "Arkansas Women's Suffrage Centennial" at https://ualrexhibits.org/suffrage/josephine-miller-1888-1972/. Published by permission of the author.