Suffrage activist, novelist, and "Woman of the Century"

Ittie Kinney was born May 17, 1862 in Nashville, Tennessee, the daughter of George S. and Elizabeth "Lizzie" Kinney. Her father was a liquor dealer and Ittie had one older sister, Mary, and two younger brothers, twins James and William. She was sent to a convent in Kentucky for school. Ittie was probably best known for her romance novels Miss Breckinridge a Daughter of Dixie (1890), and An Exceptional Case (1891).

Ittie Kinney and Robert Ross Reno married in 1885. Robert Ross Reno was the only son of the Marcus A. Reno who experienced shame for surviving the Battle at Little Big Horn. M.A. Reno's tarnished legacy weighed on Robert who became a known alcoholic. The combination of money issues, social shame, and alcoholism took a toll on the marriage. The couple had no children. According to the 1910 census, Ittie was living with her father and is listed as widowed, while in the 1930 census she is listed as divorced. On her death certificate, she is listed as widowed. Also in the 1910 census she is listed as earning money on own account, but it is struck through. According Ronald Nichols' book In Custer's Shadow: Major Marcus Reno, Robert and Ittie divorced in 1899.

Ittie worked for women's suffrage in Tennessee. In 1909 she delivered the first women's suffrage address in Nashville at the Centennial Club. In 1915, she was a member of the legislative lobby committee for the Tennessee Equal Suffrage Association under the direction of the Nashville league president Mrs. Guilford Dudley who had been appointed legislative chairman by State president Mrs. French. Ittie worked with Mrs. Kenny, Mrs. Kimbrough, Mrs. W.G. Spencer, Mrs. Reau E. Folk, Mrs. Victoria James Roach, and Mrs. A.Y. Scott. In January 1915, as a member of the lobby committee, Ittie and the rest of the committee stood behind Mrs. Dudley as she made an "eloquent appeal for justice and fair play" urging them to permit the House to vote on the Tennessee measure. After the speech the measure passed the House and Senate with very few voting against. In 1917 this measure was replaced by the Presidential suffrage bill.

In Tennessee it was difficult to convince suffragists to participate in street speaking due to the societal pressures of the conservative traditions found in the South. At the 1916 National suffrage convention at Atlantic City, members of the Nashville league saw examples of street speaking's wonderful effects and wanted to bring that back to Tennessee. In 1917 Ittie, along with Mrs. Jackson, Mrs. Kimbrough, Mrs. Kenny, and Mrs. White "courageously and with bold hearts" performed street speaking multiple times a day in Jackson and Memphis.

In 1917 according to an article in the Columbia Herald, Ittie was known to travel to different towns to promote women to sign up for a registry of service. This registry was a way for women to specify how they would be able to volunteer to help with the war effort and was not mandatory. From September 1917 to January 1919 Ittie, as a member of the legislative lobby committee, worked incessantly in the districts of hostile or doubtful senators for women's suffrage in Tennessee. She worked along with Mrs. Warner, Mrs. A. G. Buckner, Margaret Ervin Ford, and Mrs. Matilda Porter for the final push for the passage of the bill. Ittie Kinney Reno was a formidable voice in the chorus calling for women's suffrage in Tennessee.

Ittie died June 5,1941 and is buried in the Cave Hill Cemetery in Louisville, Kentucky

Who's Who in Tennessee: A Biographical Reference Book of Notable Tennesseans of To-Day. Memphis: Paul & Douglas Co, 1911.https://tngenweb.org/whos-who/reno-itti-kinney/

A photograph and a sketch of Ittie Kinney Reno can be found in A Woman of the Century edited by Frances Elizabeth Willard, 1893, p. 604. 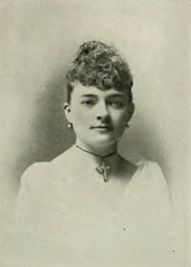