Annis Ford Eastman participated widely in New York State's pro-suffrage cause and appeared at meetings of the National American Woman Suffrage Association (NAWSA) and other national venues, from the early 1890s through the first decade of the twentieth century. An ordained Congregational minister and reform advocate, Eastman drew together central features of the movement for women's social and political equality that characterized New York State during the late nineteenth century.

Born in 1852 in Peoria, Illinois, Annis Bertha Ford initially pursued work as a schoolteacher and enrolled in the Oberlin College Ladies' Department between 1872 and 1874. At Oberlin, she met and promised to marry Samuel E. Eastman, the son of a circuit-riding minister from the Saint Lawrence River valley, who attended Oberlin's seminary in preparation for ministry. When Samuel completed professional training at Andover Theological Seminary, he and Annis married. Between 1875 and 1881, they moved between Samuel's parish appointments in Massachusetts, Kentucky, and Canandaigua, New York. The couple had four children, the oldest of whom died in 1884. In the years following this early death, both Annis and Samuel experienced debilitating illnesses, so severe for Samuel that he resigned his preaching position in August 1886.

With her husband unable to support their family, Annis Eastman began teaching at Canandaigua's Granger Place school, and took interest in pursuing a ministerial career herself. In her role as a minister's wife, Eastman had worked as a temperance advocate and home missions officer, gaining experience in public speaking. Testing her ability in the pulpit, she began preaching at a village church in Brookton, New York, where the congregation hired her as their full-time minister. Recognizing Eastman's skill in preaching and leadership, on November 12, 1889, Thomas K. Beecher, Harriet Beecher Stowe's younger sibling, convened a council of prominent ministers from New York's Southern Tier and ordained Annis Eastman as a regular Congregational minister. In this, Eastman was among the first U.S. women to receive the official sanction of ordination, reflecting the experiences of other women leaders in New York State. The first ordained U.S. woman, Antoinette Brown Blackwell, had been consecrated in 1853, sixty-five miles north of Brookton in South Butler, New York, and twenty miles from Seneca Falls.

Eastman served the Brookton parish for three years, until a larger church in West Bloomfield, New York, hired her as minister. This congregation sent Eastman to address the Woman's Congregational Congress and the World's Parliament of Religions at the 1893 World's Columbian Exposition in Chicago, elevating Eastman to national awareness. The next year, Beecher hired Annis and Samuel together as associate ministers to assist in his Elmira, New York, church, where Mark Twain attended with his wife's family, and where Annis and Samuel assumed full ministerial responsibility after Beecher's death in 1900.

Eastman championed woman suffrage from an early age. As a high school student, in the spring of 1870, Bertha Ford had introduced Anthony's remarks during a suffrage event in Peoria, and, as an Oberlin student two or three years later, she visited Anthony's hotel room while hosting the suffrage leader on behalf of the college Ladies' Literacy Society. Throughout the 1890s and into the 1900s, Eastman championed progressive causes in lectures before women's clubs, in private parlors, and on pro-suffrage platforms. A staple figure of New York's suffrage movement, she also participated in national conventions. During a January 1893 worship service at the NAWSA's national meeting, Susan B. Anthony introduced Eastman as the movement's main "orthodox woman minister," referring to Eastman's continuation of regular ministry while also working as a suffrage activist, to that point an anomaly among suffragists and clergywomen. (New York Daily Tribune, January 16, 1893)

In addition to reform activism, Eastman's career straddled diverse interests. During the 1890s and early 1900s, Eastman attended lectures at the Harvard Summer School of Theology given by such leading intellectuals as William James, Josiah Royce, and George Santayana. She published numerous essays in the feminist and denominational presses, articulating an expanded vision of women's place in society, parsed through a liberal Protestant idiom. Searching for remedies to address chronic pain in her feet and back, Eastman experimented with theories of mind-body connection. She received regular treatments from New Thought practitioners and was among the first in the United States to undergo Freudian psychoanalysis in Abraham Brill's Manhattan clinic. Eventually Eastman decided to leave the ministry in order to pursue other professional work, and considered seeking the deanship of Barnard College. This determination was never realized, however, as Eastman experienced complications after a difficult surgery and died in Elmira on October 22, 1910.

Eastman's legacy carried forward principally in the careers of her children, Max Eastman and Crystal Eastman. Mentored by his mother while attending many of her suffrage speeches across New York State, Max Eastman helped to form the Men's League for Woman Suffrage in 1909 with her assistance. In November 1909, staying with Max in New York while seeing Dr. Brill, Annis Ford Eastman wrote to women in her networks to enlist their support. Max also spent the 1910s and 1920s organizing New York City's socialist left while editing the radical magazines, The Masses and The Liberator. Crystal Eastman was among the first women to graduate from New York University's Law School and used her credential to author some of New York State's first workers' compensation laws and to advance the pro-suffrage movement in New York and in Wisconsin. 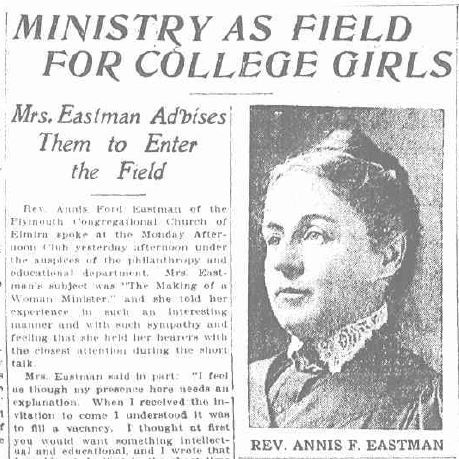 "The Hero as Parent: My Most Unforgettable Character." In Heroes I Have Known: Twelve Who Lived Great Lives, 1-16. New York: Simon and Schuster, 1942.