Mary Allen was born December 2, 1842, in Shefford, Quebec, Canada, to Charles Allen and Wealthia Spencer Allen. Her parents moved to Michigan in 1847, staying through 1852, when a brother, Frederick, joined Mary and sister Martha (born 1844). However, the lure of the American west pulled her family to Missouri where they initially joined a wagon train heading for Pike's Peak, but her parents opted to switch to one bound for Oregon.

In 1858 while traveling west, Mary married fellow Canadian, Bethuel Carter Ranous. By 1861, they were living in the mill town of Ophir, Nevada. Daughter Leona was born in 1861, followed by Leota in 1864. Bethuel traveled constantly all over the western states which must have been a factor in the deterioration of their marriage. They are listed together in the 1870 census, but by 1880, that census shows he is divorced.

Mary married Daniel Bockius Boyd on September 23, 1874. He had been born in Mercer, Pennsylvania, in November 1834. After a brief stay in Franktown, Nevada, where Daniel had served as the postmaster, they moved to Reno, building a house at 437 Chestnut Street where they resided for many years. Adelaide Melvina Boyd was born in 1875 and Delle B. Boyd in 1879. Originally elected in November 1878, Daniel was county treasurer of Washoe County for thirty-five years, often running unopposed and becoming affectionally known by locals as "Uncle Dan."

Both Boyds became active in community activities. While Daniel joined the Masonic Lodge and the Independent Order of Odd Fellows, Mary participated in activities of the Methodist church and got involved with the Woman's Christian Temperance Union (W.C.T.U.), serving as a vice president of this group in 1883 and president in 1891. When well-known suffragist Susan B. Anthony addressed a large gathering at McKissack's Opera House in Reno in May 1895, Mary served as part of the event planning committee and was a platform guest at the event according to local news coverage.

Formal organization of a state suffrage organization began October 29, 1895, also at the opera house. Mary was appointed as the Temporary Chairman of the gathering until the Nevada Equal Suffrage League, a branch of the National American Woman Suffrage Association, was officially formed with Mrs. Frances A. Williamson of Austin (Lander County) elected as the first president. Mary was elected as the State Superintendent of Fair Work for the organization. This statewide group sponsored conventions: October 29-30, 1895 and September 1896, both in Reno. Following these, Mary's home was often used in 1896 and 1897 as the site for meetings of the local organization, the Reno Equal Suffrage League. Supporting organizational goals to promote bills before the Legislature, Mary was reported in the Nevada State Journal as going to Carson City in February 1897 with other members of the state group to support a pending suffrage bill. A third convention of the Nevada Equal Suffrage League met October 30, 1897, in Carson City, pulling 300 delegates from thirteen counties. In 1899, another suffrage resolution did not pass in the Legislature. With that defeat and Williamson moving away from Reno, interest in suffrage in the state seemed to wane and no suffrage resolution was proposed in the Nevada Legislature between 1901-1909.

On the evening of February 4, 1911, an organizational meeting for those interested in women's suffrage was held in the Odd Fellows' Hall in Reno. Out of this, the Nevada Equal Franchise Society was begun with Margaret Stanislawsky as the President, followed by Anne Martin in 1912. Mary is recorded as a charter member of this group. In June 1913, Mary and other members of the Nevada Equal Franchise Society participated in a parade sponsored by the local post of the Grand Army of the Republic and reportedly got both cheers and boos from the parade crowd.

As reported in the Reno Gazette-Journal on February 18, 1914, Mary held a tea at her home as a function of the Reno Equal Franchise Society. This was followed on the 24th by a public meeting of the Nevada Equal Franchise Society with Anne Martin presiding. Mary is listed as a platform guest for this event. Women in Nevada gained the right to vote in the state election held November 3, 1914.

With suffrage in the state obtained, women's organizations begin to evolve into civic leagues designed to provide information and training to the new voters. By 1915, the women in Reno had divided into two competing groups. Anne Martin led the Women's Civic League. Sadie Hurst headed the Women's Citizens Club. In February, the two groups merged as the Reno Women's Civic League. When Charlotte Perkins Gilman, another noted national suffrage speaker, came to Nevada in May 1915, Mary was part of the receiving party who met her at Anne Martin's mother's home. On April 26-28, 1916, the Nevada Women's Civic League held a state convention in Reno. Mary was a Reno delegate to this event as reported in the Nevada State Journal.

In 1918, Sadie Hurst ran for the State Assembly and was elected as the first female legislator. With the Federal Woman Suffrage Amendment seeming to be garnering a positive response by members of Congress, Carrie Chapman Catt, the president of the National American Woman Suffrage Association, requested that a Ratification Committee be formed in Nevada. This was accomplished in December with Mary as a member. This committee requested that Mrs. Hurst present a resolution to the Legislature asking for support of the federal amendment. This was done on January 22, 1919, and it passed in both the Assembly and Senate.

In August 1919, Mary opened her home to host a reception of members of the W.C.T.U. according to the Reno Gazette-Journal. At that event, she shared what she labeled, "Pioneer Suffrage Days and Experiences." One involved what occurred when she was circulating a suffrage petition prior to Nevada women obtaining the right to vote in 1914. What she recounted is not reported but it must have been a memorable tale. 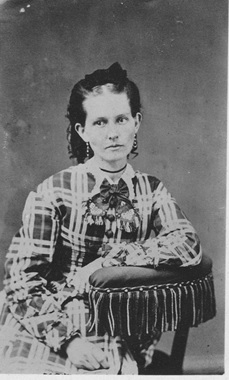 Boyd, Mary A. Death Certificate. As found at Ancestry.com.

Ranous, Bethuel C. (1906). An Illustrated History of Skagit and Snohomish Counties: Their people, their commerce and their resources, with an outline of the early history of the state of Washington. Chicago: Interstate Publishing Company, p. 638.