Caroline (sometimes spelled Carolyn) Fleming was born in New York in June 1882, the youngest of the six children of William A. and Emily Fleming. In 1900 the family lived at 42 Lefferts Place in Brooklyn. Five children were still living at home at this date and the household included a Swedish-born servant. Her father was a railroad freight agent and her three older brothers were all employed, two as clerks and the third as a railroad agent. With four white-collar employed family members, the Fleming family was quite prosperous.

The family's economic standing permitted Caroline to enter Vassar College in the fall of 1902. In March 1904 Fleming was among 22 sophomore women selected to be "daisy chain" girls at Vassar Class Day. She was identified as coming from Flatbush, NY. She graduated from Vassar in 1906, and did editorial work for Century Magazine in New York City, 1906-1908. By 1911-1912 she was working for the New York Woman Suffrage Association.

Caroline carried the banner of the New York Woman Suffrage Association at the head of the mammoth suffrage parade on 6 May 1911 on the streets of New York. This was the second major suffrage parade in city, with the first coming a year earlier, in May 1910. While the first parade attracted about 400 participants, some 3,000 marched in the 1911 event. Parading remained controversial. Some found it shocking or ridiculous that women would display themselves on public streets. But once the parade was held and those who watched it noted its quality and demeanor, and found little cause for laughter or scorn. The newspapers reported that the jokes were directed at men in the line, and even their experience, while trying, was not painful.

Caroline Fleming carried the flag at the parade with elan. The flag was made of white satin with a heavy gold fringe and a golden wreath of laurel in the centre with the name and date of the organization. Various newspapers reported about the march and in one newspaper the editorial was all praises for the democratic parade in which rich and working women of varied professions marched together in common cause for equal suffrage.

The fight for suffrage was not easy as it required regular funding. The funds for the parade were collected by Mrs. Emma Yard Ivins, the State treasurer who generously gave her money, time, thought and effort to strengthen the association through the years of her service. Documents list receipts, contributions in kind, and disbursements totaling over $2,000 for New York Suffrage Parade. A new suffrage song was composed by Elas Gregori, to be sung during the suffrage march. The new march song was also performed at Clinton Hall, where a mass meeting was held to recruit participants for the suffrage parade. James H. Brady, Governor of Idaho, spoke, testifying to the positive influence of women voters.

After the suffrage parade, Caroline and a suffragist companion undertook a speaking tour through fourteen states in New England, the Middle Atlantic and Midwest that took them as far west as Kansas. In late August, she and Martha Gruening, representing the National American Woman Suffrage Association (NAWSA), spoke at a large suffrage rally on the Boston Common, lending their support to the suffrage referendum on the ballot in California on October 10. After Boston, the pair headed to Connecticut, New York, and Ohio. In September they spoke in Indianapolis, IN before the Woman's Franchise League of that city, and were described in a local paper as "recognized leaders in the American suffrage movement." That event was followed by speeches in Wisconsin, Minnesota, and Iowa. In mid-October Gruening and Fleming spoke at "a meeting of college women at Lawrence University" in Kansas. Kentucky was their next stop, which probably included attending the annual meeting of NAWSA held in Louisville the next week. Stops in Washington, DC, Baltimore, and Philadelphia brought them back to their home base in New York City.

Bin 1917- 1920, Fleming worked as assistant to the director of the Children's Bureau in the federal government. She gave testimony before a House committee hearing on the legislation that became the Sheppard-Towner Act, a pathbreaking federal effort to improve maternal and infant health. In April 1920 she took charge of the Children's Bureau while its director, Julia Lathrop, was on an official trip to Czechoslovakia. August 26 found her at Poll's Theater in Washington, DC celebrating the final ratification of the 19th Amendment under the auspices of the National League of Women Voters. Speakers at the event include the Secretary of State, Bainbridge Colby, who had just officially signed the 19th Amendment following its ratification by Tennessee, the 36th and last state to vote its approval. NAWSA officers Carrie Chapman Catt and Harriet Taylor Upton also addressed the gathering. Caroline Fleming was noted in the Washington Evening Star as one of "those women in important positions who have consented to sit on the platform" for the event.

Vassar alumnae records permit us to track Fleming's subsequent employment. She worked as a copywriter for the advertising agency, J. Walter Thompson, in 1920-1924 and she opened the Channel Bookshop in New York City in 1925. She was still noted as the bookshop's president when Vassar's Alumnae Biographical Register was compiled in 1939. We still have not found a death record.

"A Demonstration that Made an Impression and Saturday's Parade Reviewed," May 6, 1911, in Miller NAWSA Suffrage Scrapbooks, Scrapbook 9, Library of Congress, Washington, DC. Accessible online at http://hdl.loc.gov/loc.rbc/rbcmil.scrp7007605 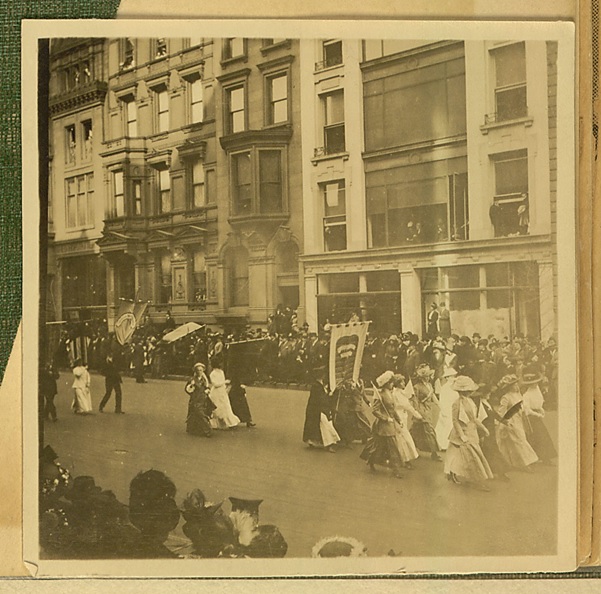