Mrs Orton H Clark, while her actual name was Nellie Melia Clark, her Maiden name was Sawyer. She was born on October 6, 1866 according to her grave's headstone, though her death certificate states she was born in 1864 in Bellevue, Ohio, parents were George Sawyer and Julia Wood and died on October 4th 1935, in Ann Arbor, two days before her 71st birthday. Her death was caused by pneumonia.

She was married to Orton H Clark, but they eventually divorced. Together they had two sons. Orton Horace Clark, Jr. served in the US military and went to Princeton University for military Ground work. Their older son, George Sawyer Clark, was also in the military as a flight commander. Her ex-husband was known to be a surgeon and a physician at Michigan's Kalamazoo city insane asylum, in the female department around the early 1900's, while she stayed at home, leaving her time to help organize events for Michigan's equal suffrage association.

She was one of the main presidents of Michigan Equal Suffrage Association from 1914 to 1918, helping with women's voting rights. The Association had many ups and downs but gained partial suffrage at two periods ending in a complete victory in 1918 for women's suffrage in Michigan. According to the History of Woman Suffrage , vol. 6, in 1900-1901, the principal efforts of the association, which consisted of 14 auxiliaries, were along educational lines. At the annual convention in 1902 a petition was sent to President Theodore Roosevelt to recommend a woman suffrage amendment to the U.S. constitution in his message to Congress, which was heartily endorsed by the National Grange then in session in Lansing, Michigan. Nellie Sawyer Clark was also a part of the official board, as well as being a part of the Kalamazoo Gazette's editorial staff for the suffrage edition of the newspaper. 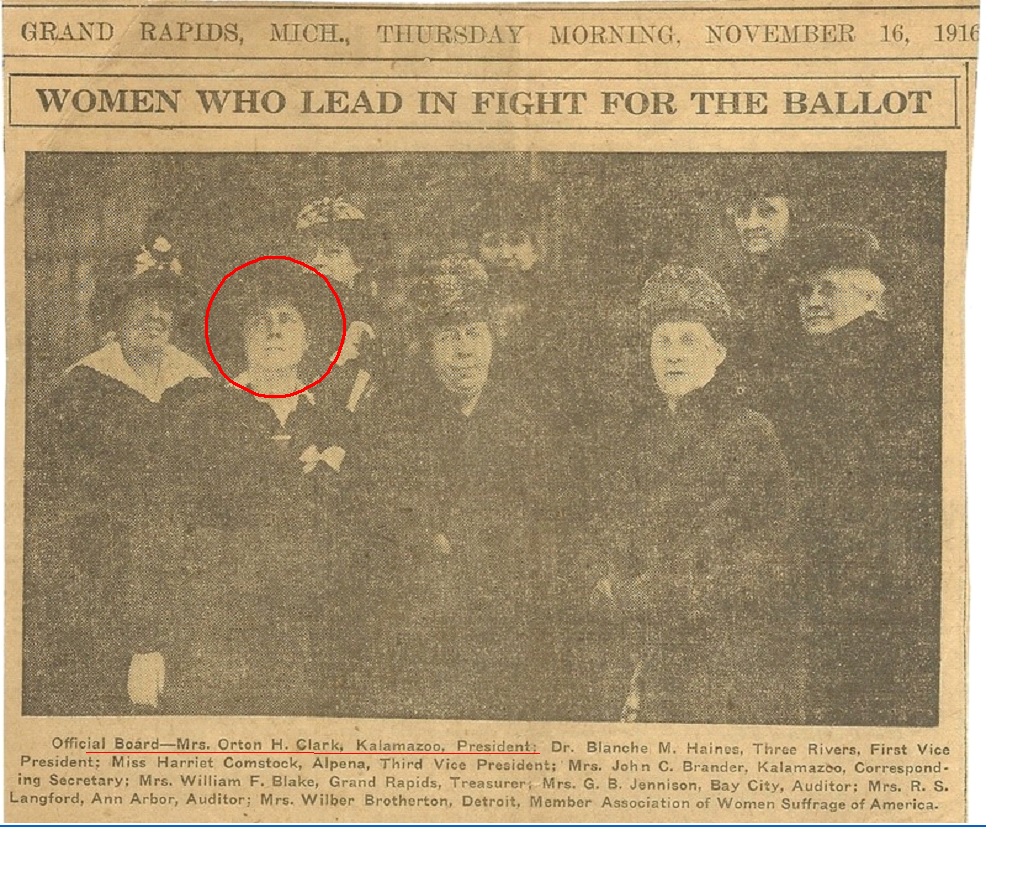 "Women Who Lead in Fight for the Ballot," Photograph of the Board of the Michigan Equal Suffrage Association November 16, 1916

"Women Who Lead in Fight for the Ballot," November 16, 1916, photograph of the Board of the Michigan Equal Suffrage Association, Ann Lewis Women's Suffrage Collection, accessible online at https://lewissuffragecollection.omeka.net/.