Katherine Louisa Madairy was born on October 3, 1850 in Baltimore, Maryland. She spent her life in that city, and married John Keen Van Horn (with whom she had at least four children). As early as 1900, she was at the forefront of a local movement to involve women more prominently in the public sphere. In March of that year, she was amongst the first group of women ever to be elected to the board of stewards at the Hampden Methodist Protestant Church. During the decade that followed, she is reported to have helped run the Woman's Christian Temperance Union. In August of 1911, when suffragists received permission to visit the polls and speak to election officials (as long as they did not engage in electioneering), Mrs. Van Horn served in this capacity for the Thirteenth ward. In addition, during this second decade of the century, she was a county representative to the State Convention of the Women Suffrage Party of Maryland.

Mrs. Van Horn died on April 4, 1937. Although she lived to see the passage of the 19th Amendment, she passed away before Maryland voted to ratify the Amendment in March of 1941. (In fact, that vote was not certified until February 25, 1958.) 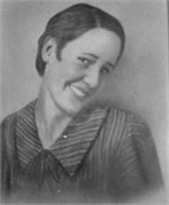 Photo from Find a Grave