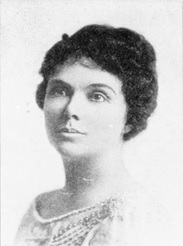 Helen Thomas was born in Council Bluffs, Iowa on October 30, 1872, moving at a young age to Denver, Colorado where she was educated. She married Samuel W. Belford, an attorney, in Colorado and they had one child, a son named John. The couple moved to Ely, Nevada, and ten years later, in 1920, the Belfords moved to Reno, and resided there for the rest of their lives.

Nevada suffrage history goes back to the 1860's. In 1869, five years after Nevada became a state, a resolution to amend the Nevada Constitution to give women the right to vote passed both houses of the Nevada legislature. Under Nevada law, however, the next legislative session must pass the resolution a second time. It failed to do so in 1871. It took until 1911 for a suffrage resolution to pass both houses again; the 1913 legislative session needed to pass it a second time.

Meanwhile, the Nevada Equal Franchise Society organized in 1911 to push for women suffrage. Under the leadership of Anne Martin, the newly elected president in 1912, the organization became a vibrant force in the suffrage campaign. It developed a strategy to set up organizations or committees in every county and towns. Within a year, the Society developed into a state-wide organization with most counties and towns organized and 1000 paid members.

A supporter of woman suffrage in Colorado as early as 1893, Helen (Mrs. S.W.) Belford continued her suffrage efforts in Nevada. She and four other women "were an active force in organizing societies" in three towns in Washoe County, the largest in Nevada. "Tireless in conducting their work," Anne Martin noted later in her memoirs.

The Nevada Equal Franchise Society's organizational efforts proved successful. In January 1913, the Nevada legislature approved and the Governor signed the suffrage resolution. Voters were to decide the issue in the November 1914 general election.

The Franchise Society held its annual state convention in February 1914. Mrs. Belford served on the committee of arrangements for the convention; her husband attended and joined the Nevada Men's Suffrage League which was organized at the convention. "Every vote counts" became a slogan. The society developed a plan to build up large majorities in rural areas and mining districts to overcome the hostility to suffrage by saloons, gambling places and dance halls.

In Washoe County, which included Reno, the largest town with a population of 15,000, Mrs. Belford and others employed tactics of distributing suffrage literature to every voter and personal contact such as canvassing and street meetings. Mrs. Belford also assisted at the state suffrage headquarters in Reno in disseminating suffrage information throughout the state. Nevada newspapers were supplied weekly with a suffrage bulletin and a copy of the Woman's Journal. More than 100,000 copies of a pamphlet titled "Women Under Nevada Laws," written by Bird Wilson, vice president of the suffrage society, were distributed throughout the state. The laws included that a woman had no control of her earnings or children, and a woman lost her citizenship if she married a foreigner. The pamphlet successfully educated women who had very little knowledge of their rights and eased the views of male voters.

A final canvass of the state started in July 1914. The State headquarters in Reno focused on sending suffrage leaflets to all registered voters. Mrs. Belmont, state suffrage secretary in Nevada, and other volunteers sent out thousands of leaflets appealing to voters "to give women a square deal." 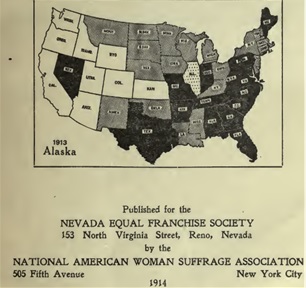 On election day in November 1914, suffrage activists throughout the state, including Mrs. Belford and others in Washoe County, picketed the polls every hour and handed out a leaflet showing Nevada as "the big black spot entirely surrounded by white suffrage states in the West."

The suffrage resolution passed in the November election. Washoe County and the other three most populated counties rejected the resolution but the tireless efforts of the suffragists in the counties succeeded in bringing down the number of negative votes.

The Washoe County Equal Franchise Society held its annual meeting in February 1915 and formed the Woman Citizens' Club to succeed the society. Mrs. Belford was elected vice-president. Later, the club became the State League of Women Voters with Mrs, Belford as chairman. She also served as recording secretary of the newly organized Nevada Woman's Civic League, formerly the Nevada Equal Franchise Society. Educating women on effective use of the ballot was a common goal of the organizations.

In 1918 the Washoe club endorsed its president Sadie Hurst for the State Assembly. Her successful campaign made her the first woman member of the Legislature. When it appeared likely that Congress would pass a federal suffrage amendment in the near future and send it to the states for ratification, the club formed a ratification committee with Mrs. Belford as acting chairman. The committee requested that Mrs. Hurst present a resolution to the Legislature in favor of a federal suffrage amendment. The Legislature voted overwhelmingly in support of the resolution in January 1919.

In addition to her work for suffrage, Mrs. Belford engaged in numerous other activities. Her executive positions included state chairman of the Women's Liberty Loan Committee during World War I, president of the Young Women's Christian Association in the 1930's, and an officer in the Nevada Federation of Women's Clubs. She was a member of the Democratic Women's Club, the Reno Progressive Club and the Monday Club, which discussed current events.

Mrs. Belford remained active until her sudden death at her Reno home on December 28, 1939. She was interred with her husband in the Masonic Memorial Gardens in Reno, Nevada.