Helen Grace Putnam was born in Boston, Massachusetts in 1840 to Edmund and Elisa H. Putnam. Well educated, in early adulthood Putnam worked as a music teacher and edited a liberal Christian magazine. Shortly after the U.S. Civil War, however, Putnam found herself cleaning houses in Dedham, Massachusetts to support herself. One of her brothers had passed away due to injuries sustained during the war and soon after, both of her parents and her other brother died. Putnam joined the Unitarian Church, which became her passion and led to her ordination and advocacy for woman suffrage.

Putnam enrolled in 1886 in the Unitarian Theological School in Meadville, Pennsylvania, after Harvard Divinity School failed to admit her. The next year she moved to Iowa, where a group of liberal women ministers had the support of the Women's Western Unitarian Conference. As early as 1870, many Unitarian women preachers viewed suffrage as part of the religious experience. Reverend Julia Ward Howe viewed suffrage as "a part of their ministry." Unitarian events often integrated well known suffrage speakers, thus exposing more women to suffrage ideas. Putnam was ordained in Luverne, Minnesota in 1889. "Think of it," she wrote to the prominent Unitarian Jenkin Lloyd Jones in 1889, "three women ordained in two days--surely we are coming to the front--and tonight I am to give a lecture on equal suffrage."

At the Unitarian Convention in Minnesota that year, Putnam spoke on "the trials and tribulations of establishing the Unitarian faith," describing, according to one report, "what might be termed a boycott against people who went into the liberal movement." That convention body passed a resolution arguing "that Harvard university divinity school should be open to women." In 1894, she served as the secretary for the Minnesota Unitarian conference, which included both Dakotas in its administrative territory.

Putnam, who considered herself a missionary, first came to Huron, South Dakota, for three months starting in February 1889 to oversee a congregation organized by Unitarian and suffrage advocate Eliza Tupper Wilkes, who lived Sioux Falls, Dakota Territory, in the 1880s. The electorate of the new state of South Dakota would vote on woman suffrage at the 1890 election. Huron was an important place for South Dakota suffrage leaders, housing the likes of Emma Smith DeVoe, Marietta Bones, and Helen M. Barker. Putnam wrote in the Aberdeen Saturday Pioneer about a visit to national suffragist Matilda Joselyn Gage wherein neither of them discussed Bones or Barker who were then feuding over the political orientation of the W.C.T.U. Putnam concluded, "if our workers will only keep all personal animosities out of sight for the next few months it well be better for the cause." While in Huron, Putnam also became president of a new Beedle County W.C.T.U. chapter and spoke on Woman's Day at the state fair. Most religious denominations in the state opposed woman suffrage or remained silent during the state's 1890 campaign. Reverend Putnam, however, attended the state suffrage convention in Mitchell that August and proposed that "Suffrage men should form clubs of ten, then each man should convert ten others," saying, "If this were done woman suffrage would be a sure thing." Putnam asked, "Is it right or is it wrong that women should have a hand in the ballot? If right, let us see to it that it is made right."

In 1890, Putnam moved to Jamestown, North Dakota, after convincing the Secretary of the Western Unitarian Conference to appoint her as minister, when no male would accept the post. There Putnam spoke on "Women in the Professions," "Religion in the Home," "Fiction as an Educator," "Free Thought and Morality," and "The Bible in the Nineteenth Century" as well as presumably woman suffrage. In 1893, she served on the Advisory Council for the "Parliament of Religions" to take place at the Chicago World's Fair and invited the Jamestown women to "show what their special branch of Christian church is doing through its women workers." In 1893, she spoke at the New England Women's Clubs' Annual Meeting. By then Putnam lived in Fargo and served as associate minister to a male counterpart at the First Unitarian Society. In 1895 Putnam fell ill and passed away on 29 November. Her obituary praised her work as an activist throughout her life. 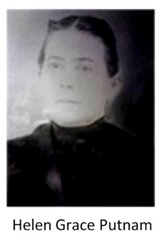