Rose Bower advocated for women's voting rights in South Dakota during the early twentieth century. She came to suffrage through leadership positions within the Woman's Christian Temperance Union (W.C.T.U.). Bower thought the liquor trade was the "most corrupt" influence on politics. Woman suffrage would clean up politics. She believed "equal suffrage ought to be equal suffrage," but willingly accepted any progress toward equality.

Rose and her twin sister Nettie were born on 16 May 1876 in Vermillion, Dakota Territory to John Calvin "Cal" and Keziah Huntington Bower, who had moved there from Lodi, Wisconsin in 1870. The Bowers affiliated with the Congregational Church. Rose and Nettie had four older siblings and two younger sisters. Cal Bower worked as a builder and ran a ferry across the Missouri River. He also formed a local "singing school" and encouraged his children to develop musical abilities. In 1885, the Bowers moved to the Black Hills, ultimately to a ranch on French Creek, near Hermosa. The family became well-known throughout the area as the Bower Family Brass Band. The band performed to fundraise for South Dakota's contribution to the "women's building" at the 1893 Columbian World's Fair in Chicago. (Rose's younger sister wrote a 1961 memoir called The Family Band, which Walt Disney Productions made into a film in 1968). Rose learned to play the trombone, cornet, guitar, and piano and became famous also for performing whistling solos.

Bower maintained a working relationship with the family ranch, but also taught at various schools starting in 1892. From 1895-1899, she taught in Florida, then Georgia near Atlanta, but returned to the Black Hills to teach in Keystone. In 1903, she moved to Rapid City where her sister Alice Gossage, also a suffragist, managed the Rapid City Daily Journal. Rose became a public librarian and performed for many women's organizations, such as the State Federation of Women's Clubs. Bower also held the position of recording secretary for the Black Hills Sunday School Association.

In 1905, a W.C.T.U. meeting in Sturgis elected Bower president of the Black Hills district; "too stunned to decline the offer," she earned a reputation of working "with energy and effectiveness" and remained president until 1908. Bower wrote a regular W.C.T.U. column for the Hot Springs Weekly Star and served as state superintendent of the organization's Franchise Department. She thought "patent medicine evil" and argued the vote would aid in "municipal house keeping." In 1908, Bower "emphatically" declined to run for the presidency in the W.C.T.U. in order to dedicate her time to winning woman suffrage.

Bower held the position of recording secretary in the Equal Suffrage Association of South Dakota for four years preceding the state's 1910 "Votes for Women Campaign." Writing a newspaper column from Denver in 1908 after election observing in Colorado, Bower expressed her hope South Dakota's legislators too would "realize their wives & sisters . . . have brains & common sense." She helped lobby successfully the 1909 state legislature for a suffrage measure and served on the subsequent campaign's publicity committee. Bower built a reputation as a "very pleasing speaker" and as she phrased it, "the cornet proves quite a drawing card." In the lead up to the 1910 referendum, she lectured on a "square deal for women" throughout South Dakota's northwest in Harding, Perkins, Butte, and Mead counties, playing scared songs, brass tunes, and whistling for suffrage. One newspaper reported, "She never forgets that she is a woman and affects none of the mannishness that has made some speakers on this subject a matter of ridicule. . . . She certainly had a logical argument for anyone who was open to conviction." However, the 1910 referendum failed.

Rose Bower remained active in the state's suffrage movement through its reorganization into the South Dakota Universal Franchise League (SDUFL) and three more campaigns. In 1912, she served as a poll watcher for Chicago's special 1912 "preferential vote" and also worked for an Ohio suffrage campaign that failed. She continued to write editorials, sometimes responding to arguments made by "Antis." As W.C.T.U. representative, Bower served on SDUFL's 1913 legislative committee, which successfully lobbied in Pierre for another popular vote. At a banquet sponsored by the Business Men's Club, Bower presented a petition from the "Western Division" of SDFUL "of sufficient magnitude to command the respectful and undivided attention of all the gentlemen present." She again in 1914 toured Harding, Perkins, Butte, and Meade counties. Then she moved on to Tripp and Gregory counties in the southcentral part of the state, lecturing and playing music at county fairs, picture shows, tent shows, automobile stands, clubs, schoolhouses, concerts, and opera house meetings. She loved "street meetings" and "down-town crowds." She felt especially "radical" when she preached the "suffrage gospel" in one German-Russian area of South Dakota. She joined "an auto party" in the Black Hills in which three cars and nine women called at seventy places with pro-suffrage literature. The 1914 measure failed.

Bower served again as W.C.T.U. representative on the 1915 legislative committee of SDUFL, which argued for resubmission to the electorate in 1916. She also accepted an offer by National American Woman Suffrage Association president Carrie Chapman Catt to work in New York's 1915 suffrage campaign, which also lost. Bower used her cornet and whistling to "catch the crowd" in New York and newspapers soon dubbed her "the Suffrage Bugler." The New York Journal explained, "Any one who wonders where Miss Rose Bower. . . . got all the lung power to bring out those full, clear notes should know that she is a ranch-woman from South Dakota" and explained further, "she is getting very anxious to return to her ranch in time for the running of the cattle." Bower played songs such as "Tipperary" and talked about buffalo berry pie and wild chokecherries. She recalled for New York audiences that a herd law passed by the South Dakota state legislature, "decidedly detrimental to her interests," pushed her to woman suffrage.

Back in South Dakota for the state's fifth losing 1916 campaign, Bower once again in 1917 helped lobby the state legislature for a resubmission on suffrage. The many public meetings canceled because of influenza's ravages as the November election approached made the last, but successful, 1918 campaign especially difficult. Still, Rose Bower was generous with her time and money and donated to the SDUFL treasury as often as she could. Bower went on to serve as a district representative and on the advisory committee of the state's League of Women Voters.

Rose Bower always desired to become a popular entertainer. She studied the cornet in Chicago and for a time in 1916 attended the New England Conservatory of Music. After her father died in 1917, however, she actively managed the cattle ranch and in the twenties organized what she called "musical round-ups" in the southern Black Hills. In 1929, she moved in with her sister Alice Gossage in Rapid City. Bower continued to write editorials. She played with the Rapid City Civic Orchestra, and in the 1930s took in lodgers. Rose Bower died on 26 July 1965 and was buried in Mountain View Cemetery in Rapid City. 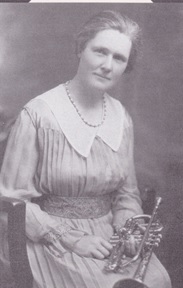