By Jacqueline Isero, History of Public Policy and Law Major with a Minor in Philosophy, University of California, Santa Barbara

"Idiots, Criminals and the Insane come and go regularly every few years...but the Big Trees--if they go--may never be reproduced on earth. How can we secure these Groves for perpetuity? This is the question tormenting my soul."

(From Cameron Binkley's "A Cult of Beauty: The Public Life and Works of Laura Lyon White: Laura White to Governor George Pardee on the Calaveras "Big Trees," 1906)

"In the construction of all cities of whatever character the essentials must ever remain the same. Proportion, space, color, cleanliness--these are the fundamentals of the City Beautiful."

(From Colburn's "Mrs Lovell White--As I Knew Her": An Extract from Mrs. Lovell White's article in "Town Talk" on "The City Beautiful")

On April 12, 1839, Laura Lyon was born just outside of French Lick, Indiana. White's ancestry was predominantly "Scotch." Her father, Jonathan Lyon, was the owner of a prosperous flour mill. After her birth, the Lyon family moved to Des Moines, Iowa, where Laura liked to ride horses and spend time alone in the nearby woods. White was a pioneer, a writer, and an organizer of social movements and institutions. She is best known for her defense of the Calaveras "Big Trees" that were threatened by a logger and her mission to beautify and improve the city in which she lived. Frona Colburn, a friend, wrote that, of all women she knew, Mrs. Lovell White stood closest to the "boundary line which divides a woman's and a man's world." While an "ardent" suffragist, Colburn remarks, White was also a "conventional society woman." White was able to make a difference in areas women were allowed to become involved in, such as caring for the environment and children. These advances ultimately helped to further the female cause as a whole, allowing women the space in the political world which would eventually lead to suffrage. White, unfortunately, died four years before woman suffrage was realized.

White's parents initially thwarted her desire to attend college, but relented after White, at the age of 15, ran away from home to survive on her own for three months in the frontier wilderness she would soon become enraptured with and endeavor to protect. White moved to Ohio to attend Oberlin College, a pioneering co-educational college, where she enrolled in the literary program from 1856 to 1858, but from which she never graduated. At Oberlin, White joined the Young Ladies Lyceum, the progressive branch of the first women's literary society in the United States, which was founded at Oberlin in 1835.

Laura, while on summer break in Iowa in 1857, met her future husband and successful banker, Lovell White; the couple married in 1858. An economic panic quickly forced Lovell White to close his bank and declare bankruptcy; and in the fall of 1859, Laura and Lovell White travelled by Panama to the French Corral mining camp near Downieville, California. While in French Corral, Laura White and her husband owned and operated a general merchandise store for five years. The camp conditions were horrible, as the hydraulic mining process had decimated the surrounding environment. Mrs. Lovell White gave birth to two children while living in French Corral, but she suffered a great tragedy when she lost them both to scarlet fever. The connection between an unhealthy living environment and her children's deaths likely stayed in her mind for a long time and motivated her eventual advocacy for cleanliness and natural beauty. Also, in French Corral, Laura's husband fostered a friendship with William C. Ralston, the founder of the Bank of California and a major financier of the Sierra mining industry. In 1864, Ralston offered Mr. White a job at his bank in San Francisco, which, six years later, led to his taking a cashier's position at San Francisco's Savings Union Bank. In 1877, Mrs. White gave birth to her third and last child. The Whites named their son "Ralston" out of gratitude for the prosperity and security the position at William C. Ralston's bank had brought them. Mrs. White had made a bargain with her husband that, in return for her bearing him an heir she was not ecstatic about raising in her mid-thirties, Mr. White would donate to her philanthropic causes; and so, after Ralston's birth, Laura White received thousands of dollars from her husband to put towards her political causes.

Once Ralston had grown up, Laura White took her efforts on behalf of the women's suffrage campaign to the next level. In 1896, she led and organized the 41st Assembly District Club of the National American Woman Suffrage Association in San Francisco, a political equality club. The California suffrage campaign that year failed, however, and White turned to focusing on women's interests over women's rights. Cameron Binkley writes that "women who engaged in civic and nonpartisan political work could advance causes related to children, community, art, or nature by espousing women's differences to men, not their equality." Binkley adds that "this approach reinforced gender stereotypes but also promoted social approval of suffrage by demonstrating that women could play a responsible role in public affairs." Mrs. White felt that women needed to involve themselves wherever they could in politics, in preparation for their eventual suffrage; her later work would be in furtherance of this belief.

Laura White pivoted towards the creation of women's civic associations. In 1897, she founded the California Club with a charter membership of five hundred people. Mrs. White was the first president of the California Club and, later in life, was named the President Emeritus. The California Club worked on a myriad of issues related to protection for women, children, and the disabled. In 1900, she collaborated with Clara Bradley Burdette of Los Angeles to organize a coalition of women's associations in the state of California. This coalition became known as the California Federation of Women's Clubs (CFWC) and united the north and the south. White was elected to be the first Vice President and established the Federation's two committees--the children and forestry committees.

Laura White became a fervent defender of the forest when lumberman Robert P. Whiteside bought the ancient redwoods known as the Calaveras "Big Trees" with the intention to log them. White was successful in starting a letter-writing campaign and in passing a bill that would allow Congress to purchase the trees. In 1904, White sent an impressed President Roosevelt a petition with over 140,000 signatures on it. In 1909, a bill that would empower Congress to purchase the Big Trees by exchanging other federal lands for them, was approved by Congress and signed into law. Mrs. White and her collaborators were invited to attend conservationist conferences such as the Pinchot conference and achieved many great victories in their efforts to save the environment. Mrs White served a three-year term as president of the Sempervirens Club, whose mission it was to preserve the Big Basin and to create state parks. It is through these efforts that John Muir and Laura White became regular correspondents and acquaintances supporting a shared cause.

Unlike John Muir, Laura White also felt that natural beauty could be extended into the city and daily life. She thought that planting trees, cleaning up garbage, and building parks and playgrounds would improve the quality of municipal life and the collective health of the citizenry. Towards that end, she organized the Outdoor Art League and the Outdoor Art Club in 1902. Ralph Waldo Emerson's words "the beautiful rests upon the foundation of the necessary" became the Outdoor Art League's motto. The League merged into the California Club three years later. In 1907, Mrs. White and the California Club pushed for the creation of a playground commission; and, in 1908, she was appointed to serve a three-year term, when she was elected president of the commission. The campaigns to save Telegraph Hill and to protect coastal redwoods, such as Redwood Canyon and Mount Tamalpais, were two notable efforts waged by the Club.

Laura White died from a sudden illness in San Francisco at the age of seventy-six on January 18, 1916. Binkley writes that '"White left a lasting legacy in the redwoods and landmarks for which he sought protection, in the civic groups that she founded, in the parks and playgrounds that she nurtured, and in the inspiration that succeeding generations of Californians have derived from all of her "outdoor art."' On April 12 1916, Mrs. Lovell White's birthday, the Outdoor Art League planted Laura a memorial grove in Golden Gate Park. In her eulogy, Reverend Caleb S. Dutton wrote that Laura White was "a great citizen, a great woman--a rare soul--a friend of her kind." Mrs. White certainly made an impact as a civic leader and her courage, optimism, and tireless work led to not only the conservation of nature and the betterment of city life, but also to the advancement of the female suffrage cause and women's acceptance in political positions. 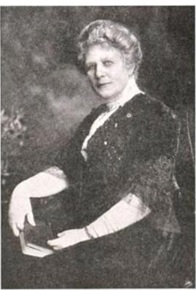 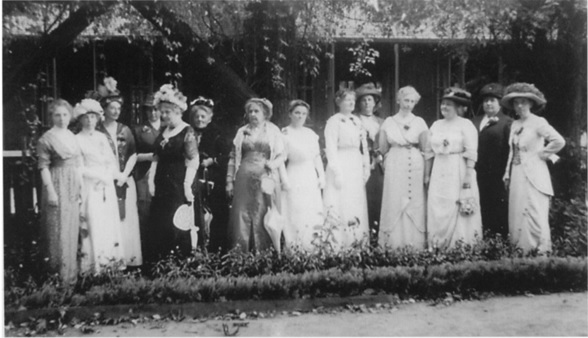 [Mrs. Lovell White and members of the Mill Valley Outdoor Art Club in 1910, Mrs. Lovell White fifth to left, from Cameron Binkley's "A Cult of Beauty: The Public Life and Civic Work of Laura Lyon White]