"I love the political game and I think the time has come when women will have the power to turn the tide and stop many of the calamities that seem pending." (Wood County Reporter, Sept. 2, 1920)

Christine Duncan Bradley was born in Lancaster, Kentucky on December 20, 1878, the second child of Margaret Duncan and Kentucky Governor William O. Bradley. Her older brother, George Robertson Bradley, was nearly ten years her senior and died at the age of 24. The daughter of the first Republican governor in Kentucky, she told interviewers later in life of how she read law in her father's office and traveled on muleback through the mountains of Kentucky to help get him elected in 1895. She married on November 2, 1904. Dr. John Glover South (1873-1940) was a general practice physician living in the state capitol of Frankfort. The elaborate wedding took place in South's parents' home, and was followed by an extended trip across the U.S. In 1905, South's father purchased a house for the newlyweds on Main Street, and her status as a popular socialite only increased. Her photograph was placed among the many items in the copper box under the cornerstone of the new state Capitol Building in 1906 with the additional notation that she had christened the Battleship U.S.S. Kentucky. By 1910 she was keeping house not only for her husband, but also for her mother and two nieces who were originally from California. Dr. South owned a farm as well and speculated in oil production.

In 1916, after Elise Bennett Smith of Frankfort resigned from the presidency of the Kentucky Equal Rights Association (KERA) to serve on the National American Woman Suffrage (NAWSA) Board, Christine Bradley South was elected President. South served as President of KERA until 1919 when Madeline McDowell Breckinridge returned to take up this leadership role again. Previously, South had been active in women's clubs and the statewide suffrage movement. She worked with Miss Lola Walker on December 6, 1916, to organize the Pulaski County Equal Rights Association. The two women had spoken at the High School Auditorium and then received at the home of Mrs. Edwin P. Morrow where the local chapter was then organized with 31 founding members (KERA, Reports, 26). She spoke on "Woman and the War" for the Scott County Equal Suffrage League, and as a result of her visit, the League sent a petition with over 100 signatures to the Kentucky legislature urging for ratification of the Susan B. Anthony Amendment (KERA, Reports, 28).

During her first year as head of KERA, South carefully controlled its message and defended its reputation, assuring its members and the public that it was committed to justice, but opposed to radicalism. She emphasized that KERA did not approve of the Congressional Union/National Woman's Party [NWP]'s protests at the White House gates since January 1917. In March 1917 at the statewide conference in Louisville and following the request of the NAWSA's president Carrie Chapman Catt to denounce the NWP's tactics, the KERA leadership issued a resolution describing the militants as "fatuous, unwomanly and reprehensible" (quoted in "KERA Resolution," 2018). South followed up by placing notices in local newspapers across Kentucky that even though there had been an announcement from Louisville that Doris Stevens of the NWP would be coming to Kentucky to recruit suffragists for the protests in Washington D.C. the leadership of KERA stands with the NAWSA in deploring the NWP's militant methods. She further stated:

There is no organization of militant suffragists in this State. It is our wish that there may never be one. It is our belief that militancy will never be endorsed by our women and will never be necessary to secure justice from the men of Kentucky. ("A Card," 1917)

In May of 1917, the Mason County Woman Suffrage League invited South to speak in Maysville. They reported "Mrs. South's gentle but forceful presentation of woman's work in the world was heartily received and the cause thereby strengthened. In a rural church once closed to a suffrage speaker, our President had a good hearing. Several names were added to the list of believers in the County and other hearts were softened" (KERA, Reports, 25). She spoke also in nearby Flemingsburg the evening before in the Lyceum Hall to a "fair sized crowd."

South's leadership of KERA coincided with World War I and she negotiated how to balance suffrage work with war work. The war hit close to home for her. Her husband, Dr. South, was drafted into military service in 1918 at the age of 45. In 1917 South organized the women of Kentucky to furnish knitted garments for the U.S.S. Kentucky she was the official Sponsor for the battleship and since 1911 had been the elected President of the Society of Battleship Sponsors. Both Madison County and the Irvington Equal Suffrage League reported to the KERA convention that they had organized a campaign to gather supplies for Kentucky soldiers. They gave a box of knitted articles for Mrs. South to donate to those on the battleship Kentucky. That year, South signed on as the president of KERA to the "Proclamation" to support the U.S. Food Administration's efforts to conserve food and "thereby assuring elimination of waste in our homes and a substantial increase in our food supplies" to show their patriotic duty and support for the war effort. Under South's leadership, many of the local suffrage clubs reported that their members had signed the food conservation pledge. She led another campaign with KERA to raise funds for the "Laura Clay Ambulance" to be sent with the Barrow Unit to the European front.

South's work with KERA did not stop when she stepped down as president. In 1919, she was elected First Vice President and continued her leadership in suffrage and war work. That year she also chaired the Kentucky's Federation of Women's Clubs' political science committee, and in that role, she led the campaign to start citizenship schools for women in every Kentucky county. In 1920 she served again as the First Vice President. Her cousin (on her mother's side), Governor Edwin P. Morrow, signed into law Kentucky's ratification of the 19th Amendment in January then the state's own law for women's presidential suffrage the following March. This law guaranteed that Kentucky women would be able to vote in the November 1920 Presidential election whether the federal amendment garnered enough states' support in time or not.

South, a recognized leader at the state and national level for the Republican Party, remained true to the ideal that the suffrage movement needed to remain non-partisan, surprising many in the fall of 1920 when she publicly praised a Democratic president for helping to bring about the federal amendment. The Mount Sterling Advocate mocked South's endorsement of President Woodrow Wilson with the headline "She Forgot; or She Flopped Which!" but printed her endorsement nevertheless:

Today Woodrow Wilson stands forth before the nations of the world as the commanding force for justice and a world democracy. He goes now to perfect that which has been baptized with the fire of the battle and sealed with a covenant of blood--a world-wide democracy, a democracy in truth of all the people ("She Forgot," 1920).

Despite her equanimity, South's Republican leanings were never in doubt. Both parties, recognizing new female voters' importance in the fall elections, sent women out to stump for their candidates. South became Warren G. Harding's main female spokesperson in Kentucky. She stressed that it was up to women to choose the right candidate and to stop pending calamities, notably American participation in the League of Nations, which would likely result in the sacrifice of their sons in future wars.

In the summer of 1921, South was one of two women to stand for election to Frankfort City Council on the Republican ticket, and the Democrats stood three women. As a result of his wife's work as the assistant secretary of the Republican National Committee in stumping for the Harding and Coolidge presidential campaign, Dr. South was appointed in 1921 as the American Minister to Panama. He was accompanied on his journey by his wife, mother-in-law (now aged 75) and according to the application for his Ministerial papers "a negro servant whose name is Al Morton." She traveled back and forth from Panama very often throughout his tenure in Panama from 1921 to 1930. In 1930, he was appointed American Minister to Portugal, and they lived in Lisbon with Christine South traveling often back and forth again until the end of his service in 1933. They had no children.

She was there in Washington D.C. when her father (governor of Kentucky from 1895-1899 then U.S. Senator from 1909-1914) died in 1914; and, she took care of her mother until she died in 1923. Meanwhile, she served as a delegate to the Republican National Convention from Kentucky in 1920, 1928 (at which she served as a speaker, seconding the Hoover nomination) and 1932. A Washington D.C. newspaper reported in 1924 that she was "being seriously discussed" as a nominee for U.S. Senator from Kentucky. Traveling from Panama to Kansas City to attend the Republican convention in the summer of 1928, she then went on a speaking tour around the county in support of presidential candidate Herbert Hoover. A reporter at the convention described South at the podium: "Untroubled by the blinding glare of the photographers' lights that were directed upon her as she took her place before the speaker's stand, Mrs. Christine Bradley South of Kentucky, in a clear, loud tone, told the world that the women were behind Hoover ... Her closely cropped head bobbed emphatically and her slim, small hands waved as she sought to tell just what Kentucky, and particularly Kentucky women, thought of their candidate." South also contributed to a radio broadcast on November 5, 1928, in New York following a speech by former Secretary of State Charles Evans Hughes. In 1932 she stumped for President Hoover with a catchy slogan "Home and Hoover" and a statement sent out from the Republican Party's national headquarters in which she reminded women of the "Better Homes" movement, asserting that "in life, in word, in thought and service, Herbert Hoover embodies the social, moral and spiritual ideals which justify women's participation in politics." In 1937, she served as a member of the Republican National Committee from Kentucky.

After her husband's death in 1940, South got a job in public relations with the State Department of Health--Dr. South had served as a secretary for the State Board of Health in Frankfort -- and she lived in Louisville for several years. However, by 1951 she returned to live in Frankfort where she lived in several places and finally at 505 Wapping Street in the historic home now called the South-Willis House. She died at home of a heart attack at the age of 78 on February 20, 1957. She is buried in the Frankfort Cemetery next to her husband and her father in the Bradley family lot (Section I, Lot 466). 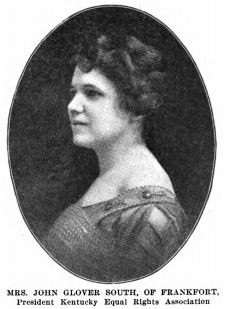