In 1910, Grace was about 17 years old and went to East High School in Cleveland, Ohio. where she was the Vice President of her Senior Class. Grace's first exposure to the woman suffrage issue probably came at Vassar College. In an alumnae questionnaire, she responded to the question "What were the burning issues of your day at college?": "Suffrage. The statuesque Izez Milholland Boissevain used to fire us to militant action in stirring talks she gave at Assembly-Main Building." Further along she commented: "Prexy Taylor was considered 'conservative' by us who dared to be interested in the socialism of Eugene Debbs [sic]--But I knew better than to mention Debbs at home, or votes for women!"

In 1914, Grace graduated from Vassar College and began working on the editorial staff of the Cleveland Plain Dealer. She left that position in 1917 and worked for the National Board of the Young Women's Christian Association (Y.W.C.A.) in New York, France, and Germany until she got married in 1919. The Y.W.C.A. is an organization that helps get women on their feet through operating business training schools. They also help provide housing and run prayer groups to help establish independence in women without operating under male church leaders. In 1918, when Grace was 25, she lived in New York. This is the address she used when she applied and received a passport to travel abroad. She was traveling as a National Board member of the Y.W.C.A. in New York to perform relief work under the Y.W.C.A of France.

A highlight in her years in Europe was an opportunity to meet the social settlement leader, Jane Addams. Here's what she wrote in a Vassar alumnae questionnaire: "All of us were going into social work. Jane Addams' 'Twenty Years at Hull House' was our Bible--it was one of the books I gave to Senior Parlor. During the war, in 1918, it was my privilege to accompany here [sic] around France, and the assignment thrilled me to the core."

On October 18, 1919, Grace Virginia Goulder married Robert J. Izant who was the vice-president of Central National Bank and took on his last name. Grace had three children with Robert, their names were, Robert J., Jonathon G., and Mary. Grace picked up writing again in 1944 when one of her articles was bought by the Plain Dealer. At the Plain Dealer, Grace published an article every Sunday in "Ohio Scenes and Citizens" in the paper's Sunday magazine. In her column, Grace would write about an interesting person, historical sidelight, or an unusual place from around Ohio, and she did this until she stopped working in 1969.

In 1944 Izant published her first piece in the column, "Ohio Scenes and Citizens," in the Cleveland Plain Dealer. Grace received many awards for her work done in the columns. She was recognized in 1949 by Ohio State Archeological and Historical Society, in 1953 by the Ohio Sesquicentennial Committee, and in 1962 by the American Association for State and Local History. Grace was the first Ohioan ever to be honored with an award from the American Association for State and Local History. In 1953 Grace has her first book published; it was called This is Ohio and told stories about eighty-eight counties in Ohio. Grace's second book, published in 1964, had the same name as her popular column. This book was about eighteen significant people from Ohio. Grace was awarded the Cleveland Arts Prize for the second book. After she retired from writing for the Plain Dealer, she wrote another book called John D. Rockefeller: The Cleveland Years, which was published in 1972. This book provided vivid details, that were unknown to many about how Rockefeller put together the enterprise that became Standard Oil.

Grace lived a very long life and passed away at 91 years old in Akron, Ohio on November 17, 1984. A year after her death her last book was published, it was titled Hudson's Heritage: A Chronicle of the Founding and the Flowering of the Village of Hudson, Ohio. Grace moved to Hudson with her husband after they got married to raise their family, this book was about this town where she lived much of her life. 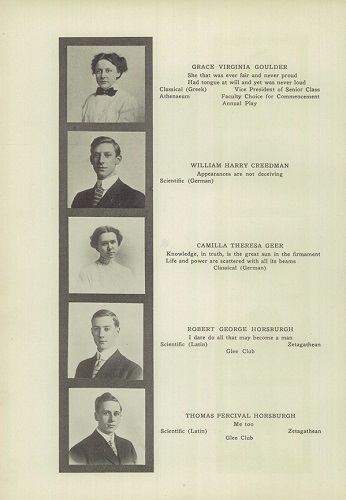