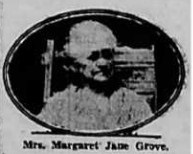 Margaritte Jane Harn was born on April 18, 1832 in West Falls, Maryland to John Harn II and Charlotte Hay Harn. She attended Shippensburg Academy in Pennsylvania in 1853 then spent 1854-55 at Cedar Hill Female Seminary in Philadelphia. She taught at Franklinville, Carroll County, Maryland during the winter semester of 1855.

On Dec. 8, 1856 in Libertytown, Maryland, Margaritte married Martin Luther Grove, foregoing her graduation from Cedar Hill. Martin took over his father's farm during the time of their marriage with great success. The couple had four children during their 11-year marriage: Florence Jessie (Oct. 23, 1858), Wilhelmine (Nov. 8, 1859), Mary Lotte (died in infancy), and Georgia (Feb. 28, 1865). After Martin's death on Oct. 20, 1867, Margaritte continued to live on the family farm until spring 1870 when she moved her family to West Virginia in order to educate her children. During her time in Pruntytown, W.V. she was a teacher and worked to improve the standards of the colored schools.

Once Margaritte moved to Fairmont, W.V. she continued her humanitarian pursuits. She was one of the leading forces of the suffrage campaign in West Virginia along with her sisters, Ellen D. Harn and Corilla E. Harn Shearer. Margaritte became the first President of the Political Equality Club also known as the Fairmont Club. This club began with only three members but flourished to be one of only two West Virginia clubs that remained after 1900. Margaritte entertained leaders of the suffrage movement in her home such as Carrie Chapman Catt, president of the National American Woman Suffrage Association (NAWSA), and worked to unite West Virginia in the cause. Margaritte is perhaps most memorable for her persistent pleas to the State Regents of Schools which finally opened the doors of the West Virginia University to women in 1889.

Not only did Margaritte share her passion for equal rights with her sisters, but her eldest daughter, Jessie G. Manley, was also a pioneer for suffrage as the first President of the National American Association during the time it organized the West Virginia Equal Suffrage Association in 1895. In her later years, Margaritte lived with her Jessie and her husband until she passed away at the age of 101 in 1933. She is buried in Woodlawn Cemetery in Fairmont, West Virginia.