An earlier version of this sketch appeared on the Better Days 2020 website, which granted permission for reprinted this edited sketch.

Hannah Kaaepa was born in March 1873 in Hawai'i. In 1898, she immigrated to Utah with her mother, Makanoe Kahluhilaau Kaaepa, to join fellow members of the Church of Jesus Christ of Latter-day Saints. Hannah's immigration occurred against the backdrop of the overthrow of the Hawaiian monarchy in 1893 and the annexation of Hawaii to the United States in 1898. Hannah's mother had been close to Queen Liliuokalani, who was dethroned after attempting to grant a new constitution reinstating the monarchy's authority and restoring voting rights to native Hawaiians. Hannah's loyalty to the crown reinforced her support for women's suffrage.

Hannah and her mother settled in Iosepa, Utah, a colony of native Hawaiian Mormons located in Tooele County. They lived with her grandfather Kaluohilaau and several other family members. Like her mother, who had held leadership positions in the women's Relief Society organization in Hawaii as well as the Woman's Hawaiian Patriotic League, Hannah quickly integrated into her new Utah community. By 1899, Hannah was serving as the secretary of the Iosepa Sunday School. She represented Iosepa at the Sunday School General Jubilee Celebration in Salt Lake City in October 1899, where she spoke in her native language.

In February 1899, Kaaepa accompanied Susa Young Gates and other prominent Utah suffragists to Washington, D.C. to participate in the third Triennial Congress of the National Council of Women. Council president May Wright Sewell invited both Kaaepa and Gates to speak on behalf of Hawaiian women. In her remarks, Hannah urged Council members to use their influence to support Queen Liliuokalani in her efforts to secure suffrage for the women of Hawaii. She ended with an expression of love in her native language and presented flower leis to Sewall, Susan B. Anthony, and Anna Howard Shaw. Queen Liliuokalani, who was living in Washington, D.C. at the time and attended Hannah's presentation, hosted a dinner in her home for Kaaepa, Sewell, Anthony, Gates, Emmeline B. Wells, and Lucy B. Young. Gates noted that Hannah "made a good impression, speaking in native and wearing with dignity the modified costume of her people, decked with leis and shells."

Shortly after she returned from the Triennial Congress, Hannah married George Lou Kauhaneola (also known as George Lowe). The couple returned to Hawaii in 1903. Although they had several children, only two survived to adulthood. Hannah died on September 29, 1918, in Hilo, Hawaii. According to her obituary, her last words included an expression of loyalty to the crown and to her faith: "Give my aloha to the Prince Kalania[']ole, stand by him, stand by the church and stand by the flag." 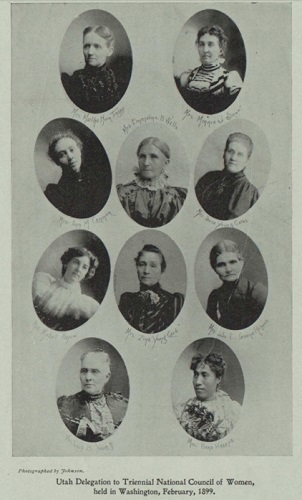 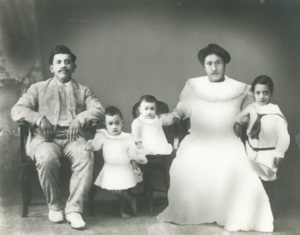 Hannah Kaaepa Lowe with her husband, George, and their children.
Photo courtesy of Loe Poulsen.