Charlotte Connah Brown, known as Mrs. A. Swan Brown, was a noted temperance leader, church worker, philanthropist, suffragist, club woman, and musician. She was born November 17, 1848 to John (1818-1853) and Keturah Connah (1820-1910) in New York City. Her father John emigrated from England to NYC. Charlotte was educated privately and also attended Packard Institute in Brooklyn, NY. She was an accomplished musician and author. Initially a member of the Unitarian Church, after meeting and marrying Abel Swan Brown (1845-1899), both she and her mother became devout Baptists.

Abel met Charlotte at a church meeting of the First Baptist Church in Passaic and they married on June 13, 1869 after a short courtship. The couple had two sons, Irving and Luther, initially residing in Brooklyn, NY then permanently moving to Passaic, NJ in 1881 where they purchased a large home at 95 Pennington Avenue. Abel was a very successful businessman who founded the Syndicate Trading Company in New York City. With branches in the US, England, France, Germany and Switzerland, their yearly purchases eventually exceeded $20 million a year.

Both Abel and Charlotte were from socially conscious, philanthropic families. His parents were very active in the abolition and temperance movements. His mother, Catherine Swan Brown Spear, was also active in woman suffrage. Her mother Keturah was known as the "mother" of the Woman's Christian Temperance Union (WTCU), as she was one of its initial founders. In addition to Abel and Charlotte's deep involvement in church work, they were very active in the community and their home was considered a center of the social and cultural life of Passaic for many years. Abel had a great love of music and organized the Brooklyn Philharmonic Orchestra. After moving to Passaic, he organized a movement to erect a city hall and public library there and founded the Citizens' Improvement Association, later known as the Board of Trade.

Charlotte was an accomplished pianist, a member of the Kenilworth Society, Passaic's literary organization, and served as president of the Union Benevolent Society which offered housing assistance to those in need. Following in her mother's footsteps, temperance was her passion and she worked tirelessly for the WTCU. Her key reason for supporting woman suffrage was the belief that it would "clinch" the passage of temperance legislation. At her 1911 New Jersey Woman Suffrage Association (NJWSA) convention address she said, "My work for the WCTU has made a suffragist of me-I did not used to be one. If I live to cast a vote against the saloon I shall be like Simeon, ready to depart. The thought has come to me, at charity conventions, that the men were doing much talking about the work, but that the women were right down in it."

Once she decided to join the suffrage movement, she put all her energies into it. In June of 1910 she was instrumental in organizing the Passaic Equal Suffrage League and served as its president for many years. The twenty-first NJWSA convention held November 3, 1911 at Willard Hall in Passaic was hosted by the Passaic Equal Suffrage League (PESL). As president, Charlotte opened the gathering with a welcome address. When an automobile tour led by Mina Van Winkle of the Women's Political Union (WPU) visited Passaic in June 1914, Charlotte and the PESL assisted in setting up an open air rally with a wide range of speakers. She also attended the 1916 NJWSA convention in Atlantic City as a delegate. During the October 1915 automobile rally jointly held by the PESL and the WPU, Charlotte led the 40-car procession on their tour of Bergen and Passaic counties visiting 35 towns along the way.

With her love of writing, in the 1880s, she became the local editor of The Passaic Daily News covering social, artistic, and literary news. As her public influence grew, she also contributed articles on temperance, suffrage and politics to both The Daily News and The Daily-Herald. For the June 6, 1914 Suffrage Edition of The Daily News, she took over as Editor-in-Chief for the day. For that issue, many of the articles and editorials were written by women, and prominent politicians were interviewed by Charlotte as to their feelings on woman suffrage. In one piece she personally wrote, she talked about the "sin of indifference", writing, "The indifference of the stay-at-home voter counts as half a vote, at least, on the wrong side. So in any "cause which needs assistance," or "wrong that needs resistance," the indifferent man or woman is really a greater stumbling block than the outspoken opponent, for there is always the hope of converting an opponent, but to arouse a totally indifferent person is a difficult task indeed." Her 1915 Daily News article "What is in a Name" finished with this statement, "What is in a Name? Very much when there is power and influence behind it, very little when these are lacking. Therefore we suffragists appeal to the men of Passaic to use their power in our behalf. Especially would we American women appeal to the men who have come to our land from across the sea, and who have had bestowed upon them (without a struggle) the right to a voice in the making of the laws under which they shall live, while we women of New Jersey, who have been born and always lived in this land, are denied this privilege. We are glad you have the right and we would not wish it taken away from you. We only ask to share it with you."

At the time of her death, Charlotte was affectionately called Passaic's "Grand Old Lady." She passed away of pneumonia on January 18, 1937 at the age of 89. She continued serving her community and writing as long as her health had allowed her to according to newspaper accounts of her life. 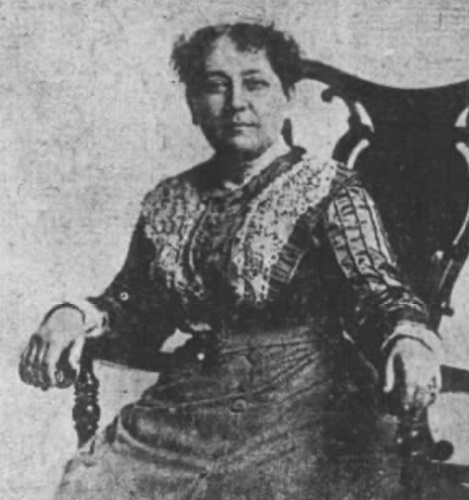