On July 9, 1842, Mary E. Smith was born in Franklin, Pennsylvania, a farming community, to Andrew Lee and Phoebe E. (Law) Smith. With two sisters and one brother, she was the eldest of the four children. Their father died in 1854, when Mary was just twelve years old. Originally educated in public schools, then continuing at a boarding school for young women, Mary was afforded good schooling. It was during this time when she first read stories regarding western life, which in turn sparked an immediate fascination. Still in Pennsylvania, she began her career as a businesswoman. After a round of teaching, Mary joined the oil and mercantile business until 1885 when she left to embark on her inevitable future in the West. Traveling by both train and stagecoach, she landed in Dawes County, twenty-five miles west of Chadron, Nebraska, Mary claimed a portion of land. This location would serve as the home for her business, which in the coming years would see $500,000 revenue per year. Mary was one of the earliest entrepreneurs in the town, opening M.E. Smith & Co., a wholesale dry goods business that was a staple for women visiting the town.

On December 29, 1887, Mary E. Smith married William F. Hayward. Much like Mary, William was not born in Nebraska but decided to settle there in 1886. Throughout their marriage, William was a politician who aligned with the Populist party. He served one term as mayor of Chadron and one as treasurer of Dawes country. For the mayoral election in 1905, William became entangled in an dispute with the opposing candidate, resulting in the court case, Hayward v. Fischer. Mary and William divorced in 1894 after a trial that lasted all of three weeks. It was during this time when Mary suffered from mental illness and was taken to a private asylum to recover.

Mary was also involved in politics, specifically animal rights. As the owner of a mercantile business, she advocated for animal rights through the merchandise she sold. For example, within the large hat department of the store, Mary refused to sell any articles that contained animal materials taken in a harmful way. As the secretary of the Society for the Protection of Birds in Dawes county, Hayward publicly advocated for the humane treatment of animals while critiquing any parties opposing her position. Similarly, Mary protested the infamous cowboy race, a 1,000 mile horse race, once again proving herself to be an animal rights activist during times when such a public position was not entirely in vogue. Mary's stance spilled over into her private life as she adopted a strict vegetarian diet. However, the cause that garnered most of Mary's attention was woman suffrage.

Mary Smith Hayward wore many hats within the movement for women's rights. In 1892, Mary had been appointed as a state member of National American Woman Suffrage Association (NAWSA) World's fair committee. In the following years, she continued to take on leadership roles in the state, serving as auditor, treasurer, vice president, president, and honorary president of the Nebraska Woman Suffrage Association. Holding such high positions, Mary completed countless tasks for the sake of equality. During annual conventions of the Nebraska Woman Suffrage Association, Mary delivered reports and served on the resolutions committee. This is also where she consistently took part in programs and led work conferences such as "The Value of a State Headquarters." These events played a critical role in women discussing the opportunities of reform, helping to both educate and inspire.

One of the major events for Hayward was held in Washington D.C.. Alongside her more famous counterparts like Alice Paul and Inez Milholland, Mary Smith Hayward proudly held the Nebraska suffrage banner at the women's suffrage parade on March 3, 1913. Thousands of women assembled in the nation's capital to demand a constitutional amendment that granted women the right to vote. This was not the first time Mary traveled to raise awareness, visiting other states as well as touring her own, in the name of suffrage. However, Mary did most of her work on the home front. She held conventions in her own home and is credited for arranging a series of meetings that brought together Nebraska woman suffrage organizations. Mary was also given the role of receiving donations from new members and those in support of the cause. Mary was able to raise funds for the Kansas campaign through a benefit where children put on a play. As all political campaigns are costly, money was necessary for the success of the suffrage movement. Giving her time to collect from others was crucial but Mary Smith Hayward made her own contributions. She donated to numerous women-run magazines and newspapers to help spread the message of women's rights. Additionally, Mary gave money for the production of suffragist sculptures. On her own, Mary was able to support and push the agenda of the suffrage association. She outwardly opposed the constraints of the government and laws. Mary refused to pay her taxes as a form of protest and would either publicly approve or disapprove of politicians depending upon their position on woman suffrage. Even after the nineteenth amendment, Mary Smith Hayward continued in her efforts to support women's rights up until her death in 1938. A fountain in her honor resides in the courthouse park of Chadron which was renamed the Mary E. Smith Hayward square after one of their most influential citizens. 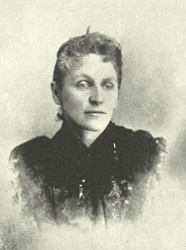