Emma W. Newbury was born in 1852 in New Jersey and died in November 1919. She was the second wife of Captain Andrew J. Newbury (A.J. Newbury) who was a sixth-generation seaman. Emma married Newbury in 1893 in Jersey City, New Jersey when she was forty years old. Captain Newbury owned schooners that carried goods along the eastern seaboard and he worked out of the piers around New Jersey and was stationed in Staten Island, New York. The couple lived in Jersey City in 1896 and eventually in Staten Island.

Emma was also a Universalist. Universalists' beliefs and practice intersected with the work of suffrage as they believed that all human kind should be included in both religious and philosophical truths related to equal treatment. Emma was an active participant in the work of the Universalist Women of The Metropolitan District. In 1898, she was the Corresponding Secretary for the group and presented a paper at a meeting that covered education of women and current political events, including concern for the U.S. Cuban Policy. In 1901 Mrs. Newbury was the Chairwoman of The Universalist Alliance Meeting and President in New Jersey in 1904.

In 1906, it was reported that Mrs. A. J. Newbury was the President of the Metropolitan District of the Universalist Alliance which include the New York counties of Brooklyn, Manhattan, Bronx, Mt Vernon, and Newark, New Jersey. At the Metropolitan Alliance's annual meeting in 1906 they adopted a resolution to recognize the life work of Susan B. Anthony. Additionally, in 1906 she urged the Alliance to protest the Rev. Thomas Dixon's new play "The Clansman" and led the group to condemn capital punishment. In 1906 when she was President, the Metropolitan Alliance also focused their efforts promoting the "greater liberty for women in marriage, in education and in the rearing of children." Through 1915, it was reported she was participating in the Universal Alliance meetings as a Past-President.

In 1915, Mrs. A.J. Newbury was elected at a Brooklyn Woman's Suffrage Party meeting as the officer from Richmond County (Staten Island). The History of Woman Suffrage, vol. 6, by Ida Husted Harper, discussed the ten-month intensive campaign to get the woman's vote in New York, which started in January 1915. The efforts were massive and included 60 District Conventions, 170 Canvassing Suppers, four mass meetings, 27 Canvassing Conferences and a convention at Carnegie Hall. The goals set were for the Woman's Party to reach all 661,164 registered New York voters. The party witnessed "hundreds of women [who] spent long hours toiling up and down tenement stairs, going from shop to shop, visiting innumerable factories, calling at hundreds of city and suburban homes, covering rural districts, the big department stores, and the immense office buildings and their thousands of occupants". Mrs. A.J. Newbury was at the center of these efforts and noted in Harper's account as one the tireless capable officials working to help Mrs. Catt as the New York State Campaign chairman to achieve woman suffrage.

The 1915 referendum campaign failed, but suffrage advocates began immediately to launch a new referendum effort for 1917. News reports from December 1916 give a window into Emma Newbury's personality and determined purpose along with others from the Staten Island Woman Suffrage Party when it was reported she was at Midland Beach, Staten Island for a big publicity stunt. They had organized this stunt because President Wilson was coming into New York Harbor on his yacht, to witness the lighting of the Statute of Liberty. The first female graduate of the Wright Flying School, Leda Richberg-Hornsby (who was also the publicity chairman of the New York State Woman Suffrage Party) was the pilot chosen to fly the plane.

The Staten Island suffrage organizers had covered the plane in suffrage colors with a large banner that said, "Woman Want Liberty Too." One can just picture the excitement and enthusiasm of the sixty-four-year-old Emma Newbury, as she watched the plane getting ready to be piloted by a woman and launched from her home community in Staten Island. Unfortunately, the flight had to be abandoned because windy conditions forced Hornsby to give up the mission and required her "to make an emergency landing in a Staten Island swamp."

Fortunately, Emma Newbury lived to see the results of her over twenty-year volunteer efforts on behalf of women when New York State gave women the right to vote on November 6, 1917. Unfortunately, Emma died at the end of 1919 and was unable to witness the ultimate success of her life's work when the 19th Amendment to the Constitution was ratified in 1920. 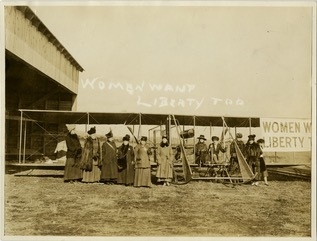 "Captain and Mrs. A. J. Newbury have taken a pretty Cottage at Waretown Barnegat Bay for the Summer," New York Tribune, July 26, 1896

"The Universal Woman's Alliance of the Metropolitan District Held Its First Meeting of the Season in Jersey City," New York Tribune, November 11, 1898