Mathilde "Mattie" Withers Bruce Reynolds was born in November of 1854 in Covington, Kentucky to Eli Metcalfe Bruce of Kentucky and Sarah "Sallie" Elizabeth Withers of Virginia. Her father was a member of the first and second Confederate States Congresses for Kentucky and the great-grandson of Captain John Metcalfe, who distinguished himself during the Revolutionary War. Her mother was the daughter of Major Charles A. Withers, a founder of Trinity Episcopal Church, a member of Covington City Council, and for whom the city of Covington named Withers Park (now called Park Place).

In 1881 Mattie Withers Bruce married a well-known eye, ear, and throat specialist, Dr. Dudley Sharpe Reynolds, at Trinity Episcopal Church. The wedding was said to be, "the most brilliant society event that has probably ever taken place in Covington." Dr. Reynolds and Mattie had two children, a son, Eli M. B. Reynolds and a daughter, Sarah Elizabeth Reynolds. Dr. Reynolds and Mattie Bruce were divorced sometime after nineteen years of marriage.

Mattie Bruce's lineage allowed her the opportunity to be a member of Virginia Colonial Dames and Colonial Daughters of America. In 1892 Mattie Bruce became a founding member of the John Marshall Chapter of the Daughters of the American Revolution. She was active in the Albert Sydney Johnston Chapter of the United Daughters of the Confederacy and on March 8, 1901, she founded and became the President of the Children of the Confederacy, E. M. Bruce Chapter, named in honor of her father.

She was also involved in civic work in Covington. She was a member of the Covington Art Club and active in the Kenton County Equal Rights Association. She contributed to the cause both monetarily and through her service. In 1907, she was elected Historian of the Kentucky Equal Rights Association. She held this office for three years and following that served on the Courtesies Committee. In 1908, she was named a delegate from Kentucky to the NAWSA convention. She was likely one of four women from northern Kentucky who marched in the Woman's Suffrage Parade in Washington, D. C. on March 3, 1913. She hosted national suffragists traveling through the state at her home at 502 Greenup Street, Covington (which is now known as the Hamilton House).

On September 25, 1916 Mattie Bruce died of injuries she received from a runaway buggy accident while in Sulfur Springs, West Virginia. She was survived by her two children. After her passing, the Kenton County Equal Franchise Association circulated a resolution to commemorate her life, declaring that she was "one of their most valued and prominent members having been an active worker and office holder and having served the body in the state conventions." Mattie Bruce is buried at Highland Cemetery in Fort Mitchell, Kentucky.

"Children of the Confederacy," Kentucky Women and the Lost Cause (includes photo of Mattie Bruce Reynolds. https://kentuckywomenlostcause.omeka.net/exhibits/show/kentukcy-women-and-the-lost-ca/leaving-a-legacy/children-of-the-confederacy, accessed December 2, 2019. 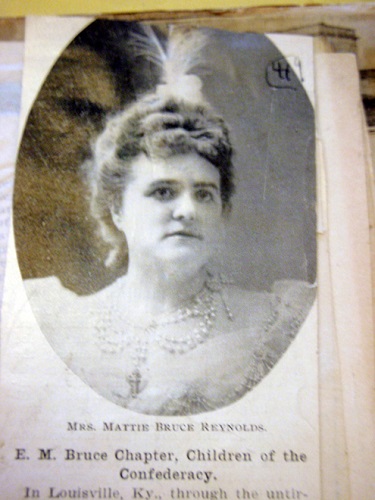