Mary K. Reynolds (maiden name uncertain) was born in Ireland about 1880. We find her first in the 1910 federal manuscript census for Portland, married to Harrington R. Reynolds. The couple had been married for four years and had no children and were renting their home in Portland's Fourth Ward. Harrington was recorded as born in Ohio about 1875 and he worked as a promoter of stocks and bonds. Local newspaper notices and accounts indicate that he and Mary K. were also heavily invested in Portland property. A 1916 account called H.R. Reynolds a "Portland capitalist," and described his purchase of 1000+ acres in the Klamath basin for more than $69,000.

While neither shows up in the 1920 Portland census, they are listed in a run of Portland city directories. Harrington appears in the years 1907-1916 and both of them are noted as residing at 224 14th St. in 1916. A fire in August 1914 destroyed the chapel at the Mount Scott Cemetery and we learn in that account that H.R. Reynolds was superintendent of the cemetery and that "Mrs. Reynolds and a cook were alone in the house when the fire first started."

In 1926 a Mary K. Reynolds is noted as a journalist, living at 474 Salmon, married to Harry R. Reynolds, which seems close enough to be the Harrington of earlier years. In 1937 this journalist lived at 429 SW 14th Ave. but no husband is listed at that address.

The couple are listed once again in the 1930 Portland census, with Mary K. described as an author, confirming her earlier occupation of journalist. This census also confirms her Irish birth noted in the 1910 census. H. R. Reynolds has no occupation listed but their home is valued at $15,000, suggesting the family is quite wealthy. Perhaps he continued to invest in stocks, bonds, and real estate as in earlier years. Their Salmon St. address in 1930 matches that given in the earlier city directory.

By 1940 Mary K. is widowed, residing in the District of Columbia, and continuing to work as a journalist. That census confirms both her Irish birth and her 1935 Portland residence. She is said to be 60 and a naturalized citizen.

Several sources speak to her enthusiasm for woman suffrage and other civic reforms during her Portland years. In her memoir, Path Breaking, Abigail Scott Duniway includes a photo of Reynolds, below which she describes Reynolds as "An Equal Suffrage Live Wire of Oregon." (p. 132) In February 1912 Reynolds participated in a suffrage meeting in the Hall of Representatives in Salem, the state capital. The meeting launched planning for the successful woman suffrage referendum later that year. She served that year as the secretary of the Oregon Equal Suffrage Association and served on its Executive Committee. In October 1912 she attended a gala 78th birthday celebration for Abigail Scott Duniway, where she sat on the stage. In May of 1913, on behalf of the Women's Good Government club, Mrs. Reynolds signed a letter thanking the mayor and city council for "opening the [voter] registration books at the country courthouse another week." In May 1914 she spoke at a Women Voters Luncheon and she served on the luncheon commit6tee that planned the event with Louise Bryant Trullinger.

Mrs. Reynolds also supported a wide range of Progressive reforms in Portland. In November 1913, she presided at a meeting of the women's clubs of the city to build support for a resolution requesting "all merchants to close at 6 o'clock." Another resolution expressed the meeting's support for the recent work of the industrial welfare commission toward establishing a women's minimum wage. In May 1914 she attended a luncheon of the Oregon Civic League focused on meat inspection. The newspaper account noted that Reynolds argued for "inspection in Portland on a basis of honesty and efficiency."

Although the census has permitted tracking Mary K. Reynolds from Portland in 1910 to Washington, D. C. in 1940, we have found no death record or any other evidence of her life in the District of Columbia in her last years. 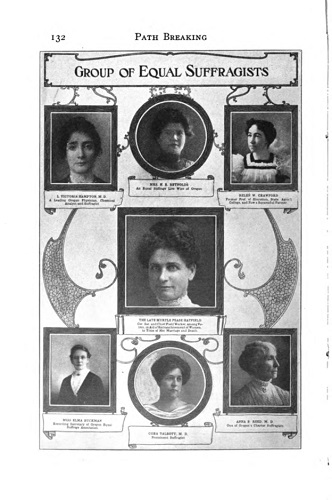