Viola Mae Coe was born in Indiana in 1863. Her family moved to North Dakota, when she was still a child. She studied medicine at Northwestern University, married Dr. Henry Waldo Coe in 1883, and then completed her medical studies. Their first child, George, was born in North Dakota in 1885. The family moved to Oregon in 1891 and two more children were born: Wayne in 1895 and Earl in 1897.

In 1900 the census found the family residing in an institutional setting in Mt. Tabor, Oregon. Henry Waldo was listed as a physician and the census household included 27 boarders, most of them recorded as patients. By 1910 the family had moved to Portland where Henry was again recorded as a physician, working in a sanitarium. Despite her medical degree, Viola was recorded with no occupation. The couple divorced in 1914 and Viola sued for custody of their minor children and a share of the shared property. She won custody of their children and a third of the community property.

During her years in Portland, Viola became active in the Oregon Equal Suffrage Association (OESA). In 1901-1904 she served as treasurer of the Association. 1906 found her as honorary president. In early 1912 she was elected president of the Portland College Suffrage League and later that year she took over as acting president of the OESA and took charge of the successful campaign for the statewide suffrage referendum during the illness of the OESA president, Abigail Scott Duniway.

After her divorce, Viola established a maternity home in Portland and the 1920 census recorded her as its president. She owned her home, though it was noted as mortgaged. Her household included her two younger children, now in their 20's, five boarders, and a Japanese-born servant. By 1930, at the age off 66, she had moved into smaller, rented quarters where she lived with her youngest son, Earl, now 32.

In the census she was never recorded as a physician, but Portland city directories did note her occupation as early as 1892 and again in 1901, 1912 and 1917. In 1918 she was recorded as medical director, perhaps of the maternity home noted in the 1920 census. Many directory entries fail to note her occupation, but one in 1927 lists her again as a physician. It is safe to say that she practiced medicine in one setting or another in Portland for at least 25 years.

She was also involved in a variety of community service activities in addition to her medical practice and support of woman suffrage. She founded a bird sanctuary on the outskirts of Portland and an obituary in 1943 noted that she was active in "church, club, and philanthropic work." Included in that latter work was her support for "several hospitals . . . dedicated to the care of women and girls." Perhaps the maternity home noted in the 1920 census was one of those institutions. 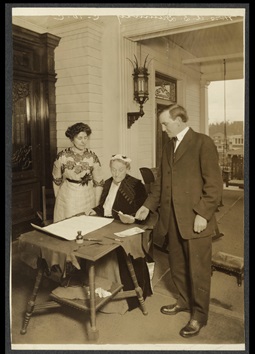