Gertrude M. Cahee was born in Brandon, Vermont in 1873 to Maria Nichols and James L. Cahee. She graduated from Smith College in 1895 and returned home to teach at the Brandon Graded School. In 1901 she married Merritt D. Chittenden, the school's principal. After their daughter Elizabeth was born in 1902, Chittenden continued to teach high school. In 1904, the family moved to Fairfax, Vermont, where Merritt served as the principal of the newly opened Bellows Free Academy and Gertrude taught modern language and literature.

In 1908, Merritt Chittenden became the principal of Edmunds High School in Burlington, Vermont's largest city. In Burlington, Gertrude Chittenden was active in a number of women's organizations, including the Woman's Christian Temperance Union (WCTU), the Klifa Club, the Red Cross, and the Young Women's Christian Association (YWCA), and frequently held leadership positions.

During 1917 and 1918, Chittenden was very involved in raising funds to support war work. She served as chair of the finance committee and then as vice-president of the local Red Cross branch. She encouraged women to purchase treasury bonds to fund the country's involvement in World War I as a member of the Vermont executive committee for the Women's Liberty Loan Campaign in 1917 and chairman of the Chittenden County women's committee for the third Liberty Loan campaign in 1918. She was the chairman of the Vermont YWCA's War Work Council and represented the YWCA on the state executive committee for the United War Work Campaign.

After the war ended, Chittenden continued her YWCA work to improve the lives of young women. In 1919, she organized meetings to plan statewide projects that included camps, clubs and conferences. In 1920 and 1921, Chittenden and University of Vermont professor Bertha Terrill chaired the Vermont YWCA Council. Chittenden also served as president of the association that operated the YWCA's Blue Triangle Hospitality House in Burlington.

Evidence about Chittenden's position on woman suffrage is slim and suggests that her position may have changed over time. When a group of women formed the Burlington Anti-Suffrage Club in 1912 after hearing from speakers who argued that suffrage was "neither a right nor a privilege, but a burden," Chittenden became a member of the club's executive committee. However, from 1912 to 1914 she served on the executive committee of the Burlington chapter of the WCTU, an organization that actively supported woman suffrage. In 1917, Chittenden organized a meeting for women interested in raising money for Red Cross work, and she included a speaker who explained Vermont's new suffrage law that allowed taxpaying women to vote in municipal elections. During the 1919 Vermont Equal Suffrage Association annual convention, Chittenden spoke at a luncheon program, "Ideas of Citizenship," where she told a group of 100 women about the YWCA statewide service project that would "make the girls broad-minded, loyal to God and country, and most of all, give them vision." In 1920, she was a member of the Vermont League of Women Voters' committee on constitution.

The Chittendens left Burlington in 1923 when Merritt became the dean of practice at Oswego Normal and Training School in New York. After his death in 1925, Gertrude Chittenden resumed her teaching career. She taught English and served as head of the English department at the high school in Kenmore, New York from about 1929-1946. Chittenden died in 1953 and is buried in Burlington's Greenmount Cemetery. 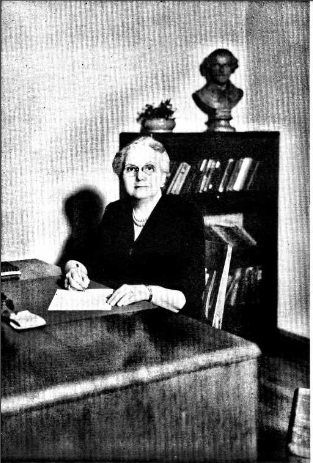