Ella Hough attended Drake University in Des Moines, Iowa to become a teacher, which is where she met her husband, Frederick Chase Aldinger. They were married in 1907 in Emmetsburg, Iowa, which is where the groom's family resided. Ella's husband received his doctorate of divinity from Yale the following year, and they moved to Grand Rapids where he became the minister of the Lyon Street Church of Christ. This post was short-lived, however, as Rev. Aldinger was removed from the church after a few controversial sermons. Shortly after this removal, he found a new post at the First Universalist Church in Lansing. In 1908 Rev. F.C. Aldinger and Mrs. Ella Aldinger moved to Lansing, Michigan where they would remain for the rest of their lives.

While her husband was the pastor of the First Universalist church, she was president of the church planning committee, which oversaw conference planning, outreach news, and missionary work.

Mrs. Aldinger was a teacher at Cedar St. High School until she gave birth to their first and only child, John Hough Aldinger, in 1912. In 1916, Mrs. Aldinger became one of the first two women to be elected to the Lansing Board of Education, where she would remain a member for 16 years; first serving as secretary, then president, and finally treasurer, which was a post she held for 11 years.

As a proud champion of social and educational causes, Mrs. Aldinger's civic portfolio began to expand once the woman suffrage movement began. She was the treasurer of the National Woman's Party, Michigan branch and she was one of several Michigan suffragists to picket President Woodrow Wilson in the spring of 1917. One of the most famous photos from the Wilson events show Mrs. Aldinger near a sign with one of President Wilson's War Messages. Mrs. Aldinger is to the left of the sign. 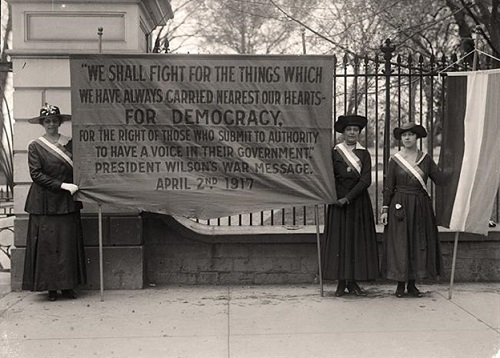 A few books about the women of Michigan picketing the White House erroneously recorded Mrs. Aldinger as being one of the sixteen protestors arrested and charged with "sidewalk obstruction." One of the sixteen women arrested was a Michigan native-- Mrs. Betsy Graves Reyneau-- who was present with Mrs. Aldinger in the April 1917 picket line, but there is not one mention of Aldinger's arrest in any newspapers regarding the White House pickets.

In 1919, Mrs. Aldinger was elected president of the Lansing Woman's Club. After the suffrage vote was ratified in 1920, Mrs. Aldinger continued her work with women's clubs, particularly Michigan's League of Women Voters, where she was elected president in 1922 after serving as vice president for two years. She worked tirelessly for voter turnout campaigns in Grand Rapids, Michigan, and in 1922 she joined those calling for more women to enter politics by joining political parties, but remain members of their clubs, which should remain nonpolitical. During her term as president of the League, rumors circulated that she was interested in a position in the national office, but Mrs. Aldinger remained true to her Michigan sisters' causes and stated in an interview with the Lansing State Journal in 1923 that she was not interested in a national office and "the women of the west and central states are the ones who are doing the progressive and constructive thinking and acting and we expect to see that they are given wider opportunities of shaping the policies of the national league." 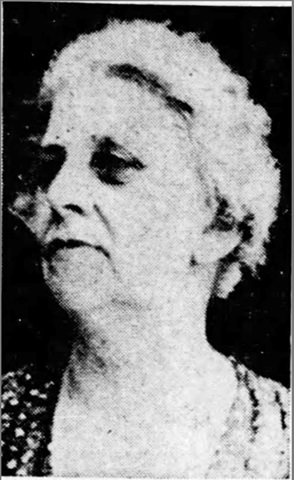 University of Michigan. (1853). The President's report to the Board of Regents for the academic year: Financial statement for the fiscal year. Ann Arbor, Mich.