Julia Blackburn Duke Henning of Louisville, Kentucky was born July 23, 1875 and died July 7, 1961 after being bedridden for four years. Julia was something of Confederate royalty in Kentucky. She was the child of Henrietta Morgan Duke, sister of famed raider John Hunt Morgan, and Confederate General Basil Wilson Duke. She married Samuel Cowan Henning, an investment banker with Henning-Chamber & Company in 1897 and together they had four children, Henrietta H. Henning, Julia D. Henning, James W. Henning and Basil D. Henning. She attended Bryn Mawr College in Pennsylvania from 1893 to 1895 where she majored in French.

Her political involvement could be said to have begun when she was still a child, when in 1883 she recited The Bivouac of the Dead to a reunion of Morgan's Raiders.

Henning's personal interest in suffrage coincided with its growing popularity in Louisville during the nineteen-teens. The city hosted the 1909 Kentucky Equal Rights Association (KERA) convention, leading to a rapid increase in suffrage activity in the Derby City. According to her response to a 1961 alumnae survey submitted to Bryn Mawr College, Henning's involvement in the Woman Suffrage Association of Louisville (LWSA) began in 1911, the same year the National American Woman Suffrage Association (NAWSA) met there. The death of her husband in 1913 may have also propelled her suffrage work. She proudly reported that she was an "active worker" for the cause and her involvement bears that out. The 1914 KERA minutes identify Henning as president of the LWSA. The same year, she was appointed auditor for KERA, a position she held until 1916, when she became chairman of congressional work. As congressional chair, she divided Kentucky according to its eleven congressional districts and directed efforts to win Kentucky lawmakers over to the cause. In 1916, Henning also served as Kentucky's representative to the NAWSA executive board.

Unlike many of her KERA colleagues who supported a state by state approach to wining the vote, Henning enthusiastically supported a federal suffrage amendment. In 1917, after NAWSA asked KERA to put state organizing on hold in order to support national president Carrie Chapman Catt's "Winning Plan," Henning presented a minority report arguing that KERA must follow national directives and forego a state campaign. In opposition to the proposed majority report, she stated: "Believing that the women in Kentucky are not ready to enter any campaign for a State Amendment for woman suffrage, I object to this resolution as embodying the best interests of our suffrage cause and move it be stricken from the platform." Laura Clay, co-founder and first president of KERA, was in favor of the state-level campaign, and she blamed the Louisville board members for standing in its way. In 1919, Henning joined other suffragists lobbying in Washington on behalf of the Susan B. Anthony Amendment. She reported to KERA that she found "the Southern Congressman very open minded."

From 1920 to 1921 Julia Henning served as the first president of the Louisville League of Women Voters. Her political involvement did not end then. In 1924, as official spokesman for the National League of Women Voters, she addressed the Senate Judiciary Committee arguing against the National Women's Party's proposed Equal Rights Amendment. She stated that the organization did not support the Equal Rights amendment as it was "vague and sweeping" and would "imperil existing laws which women need," notably protective labor legislation.

As late as 1930 Julia Henning remained involved with the National League of Women Voters, acting as the chairman of the Louisville convention committee. Outside of politics, she served on the Board of the Frontier Nursing Service, as a member of the Women's Auxiliary at Advent Episcopal Church, and a member of the Filson Club, now named the Filson Historical Society, of which her father was a founding member. The Filson houses some of Julia's papers in their collection.

*Photo of Mrs. Samuel Henning on page 6 of this Bulletin 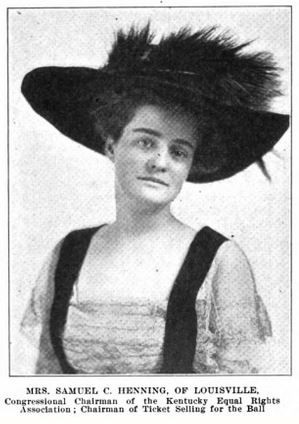 Image of Henning is snipped from "Financing the Oversea Hospital," The Woman Citizen (20 July 1918): 153. Available online via HathiTrust.org. 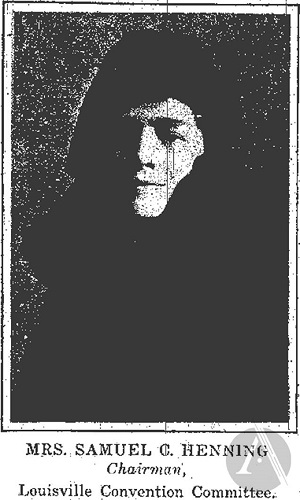