Biographical Sketch of Florence Wyman Richardson by Christensen and Burton

LINK to another sketch about Florence Richardson

Florence Wyman Richardson was an integral member of the suffrage movement in the state of Missouri. She was born on March 24, 1855, in St. Louis and died on August 19, 1920, also in Saint Louis. Florence was involved in an early suffrage group led by Virginia L. Minor. Florence joined this group in 1882 and worked with them to petition the state legislature to raise the age of legal consent. Florence went on to play a key role in the suffrage movement in the St. Louis area.

By 1910, Florence was a 55-year-old widow residing with two daughters, Florence and Elizabeth. The younger Florence (see her bio sketch) also was active with her mother in the woman suffrage movement. Mother and daughter were both active in founding the St. Louis Equal Suffrage League with ten other women from the community in 1910. This was the first major suffrage group to be created in the state of Missouri. At the first meeting, Florence (the elder) was elected the president of the new organization by the sixty women present at the meeting. The following year, the St. Louis Equal Suffrage League and two other groups created a statewide organization called the Missouri Equal Suffrage League. Florence became president of the statewide suffrage league, along with her leadership of the St. Louis group. She worked at both the state and local levels, presenting a number of lectures for people in the area and working to educate them on the suffrage movement.

In 1913 Florence transitioned out of both of her leadership positions, and her daughter took over as a key leader. While Florence was no longer in a leadership role, she was still involved in the push for women's suffrage. In 1915 in the New Republic journal she published an article that offers insights into her motivations and her fight for suffrage. Florence wrote about how men should prepare for the revolt of wives and encouraged women to get involved in the suffrage movement. Just a little over five years later, and the same year that suffrage was passed on the national level, Florence passed away at the age of sixty-five. Florence made numerous contributions to the suffrage movement and is still remembered today as an important figure in the Missouri suffrage movement. 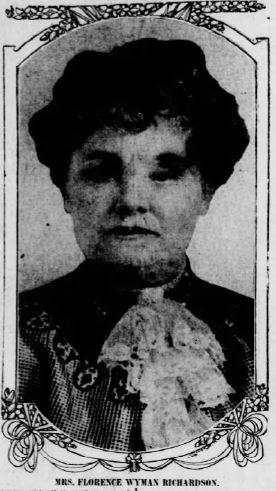