Ruth Bowman was born in Wisconsin on 19 May 1873 to Samuel and Sarah E. Bowman; she had two sisters, including the South Dakota suffragist May Billinghurst. Her parents settled land in the vicinity of Ashton, in Spink County, Dakota Territory around 1879. There Ruth graduated high school. She worked as a stenographer in the state capital in Pierre, where her father served as a state legislator. She married John E. Hipple in 1897 and they had two sons, Robert and James. John Hipple had moved to Pierre in 1888 to operate the State Publishing Company; by 1893, he opened the Hipple Printing Company, and after 1905, published the Weekly and Daily Capital Journal. Legislative familiarity, writing skills, and publishing connections primed Ruth Hipple for her role as editor of the Messenger and "Press chairman" of SDUFL for its fifth (1916) and sixth (1918) campaigns.

Hipple became interested in the suffrage cause through an older generation of South Dakota suffragists represented by Alice Pickler and Anna Simmons active in the cause since the 1880s. Pickler and Simmons visited Pierre regularly to lobby the state legislature on behalf of woman suffrage and temperance. As Hipple recalled, she attended her first "suffrage program" in Pierre as the pianist hired by the two women.

Hipple served on SDUFL's legislative committee in 1913 and attended the Mississippi Valley Conference on Suffrage in Des Moines in 1914. Mamie Pyle, president SDUFL, asked Hipple, who served as a district auditor for the organization since 1912, to become editor of the South Dakota Messenger. The weekly drew content from suffrage happenings in SDUFL's districts and from the Woman's Journal. As both national and local "Anti" suffrage associations became active, the Messenger met their arguments. The newspaper also printed endorsements from state organizations, such as the Woman's Relief Corps, the Federation of Women's Clubs, the Grange Patrons of Husbandry, political parties, and the Educational Association. Hipple occasionally waded into trouble printing disparaging comments about the state's German-Russian population and "Anti" advocates purportedly associated with "the liquor interests."

In the 1916 referendum campaign, Hipple served as "chairman" of the Hughes County branch of SDUFL; she continued to serve as press chair for the state organization, coordinating woman suffrage literature for distribution to the state's newspapers. During the Great War, Hipple served on the executive committee of Pierre's Chapter of the American Red Cross, taking charge as "superintendent of surgical dressings." As a confidant of SDUFL president Mamie Pyle, Hipple kept an eye on political doings in Pierre, including those of Governor Norbeck. In 1918, she hosted one of the several "suffrage school of methods" organized to train women to advocate for and convince voters of the justice of woman suffrage.

With woman suffrage won in South Dakota, Hipple joined the League of Woman Voters, and served on the state's initial board and as the organization's "Press Chairman." She lobbied the state's legislature in Pierre for the right of women to serve on juries. As her mentor Alice Pickler wrote a history of the early suffrage movement in South Dakota for Hipple's South Dakota Messenger, Hipple wrote a history of the last phase of the state's movement for the 1922 History of Women Suffrage. In 1920, Hipple endorsed the former U.S. Army general, Leonard Wood, to be the Republican presidential candidate and helped organize local clubs of Wood supporters across the state. She also started the Girl Scouts in Pierre. Ruth B. Hipple died on May 26, 1962 in Pierre, South Dakota and is buried there next to her husband.

Image of Ruth Bowman Hipple from Dorinda Riessen Reed's 1958 The Woman Suffrage Movement in South Dakota, republished in Pierre by the Commission on the Status of Women in 1975, p. 62. 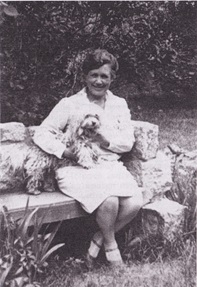