"Intensely interested in the feminist movement," Liba Peshakova began her work as a paid suffrage organizer in South Dakota's sixth and final 1918 campaign. Upon the recommendation of National American Woman Suffrage Association (NAWSA) organizer Gertrude Watkins, who described Peshakova as "a sweet, attractive girl," Mamie Pyle, president of the South Dakota Universal Franchise League (SDUFL), short of workers, hired the inexperienced Peshakova at $25 a month. Peshakova worked in August, September, and through much of October, until her friendship with Gertrude Watkins caused her to withhold significant effort in the field mere weeks before the vote.

Liba Peshakova was born Josephine Angeline Peshak to Emanuel W. Peshak (1853-1892) and Mary Schuster Peshak (1859-1908) on 5 September 1886 in York, Wisconsin. Her parents immigrated from Bohemia. She had two older brothers and the family was Catholic. She graduated with an A.B. from University of Wisconsin in 1908, after which she taught English and Drama in Wisconsin schools. She moved to Chicago where she studied "Expression" at Northwestern University (and later did some post graduate work at Columbia University). In Chicago, she adopted the Czech form of her name, Peshakova. She taught and performed at the Cosmopolitan School of Music and Dramatic Arts and associated with the School of Acting at the Bush Temple Conservatory.

SDUFL president Pyle was especially loath to lose the "excellent worker" Liba Peshakova under the "force" of Watkins' influence, because Peshakova turned out to be a "most satisfactory" fundraiser. In Brookings County, for example, after local women asked "every man for a small sum" the "stranger" Peshekova arrived and "in one day raised over $100." She continued to have "days of good money getting." And while Peshakova raised money, Pyle noted, "she was talking suffrage." Pyle thought her "invaluable" for the final push to draw down the deficit the state organization would face after the election. Peshakova's Bohemian-Czech background proved another distinct advantage for South Dakota. She claimed "to have won many Bohemians to the cause simply by ta[l]king the Slav language to them." Peshakova reminisced about the "huge buns filled with fruit," probably kolaches, "showered on" her. Pyle told NAWSA headquarters Watkins did "a great harm" to "that girl and the work she could have done for us" in fundraising. Peshakova eventually "saw the light" and did some suffrage advocacy in the last few days before the election. Later she acknowledged her "error" to Pyle.

From South Dakota, Peshakova followed Watkins to work for the Texas Equal Suffrage Association, where she did "splendid" work taking charge of the finances. Peshakova also organized for the League of Women Voters in North Dakota, Montana, Washington, and Minnesota. She eventually moved to New York City, worked as a bookstore saleswoman, and lived with fellow suffragist Gertrude Watkins in a Sheridan Square apartment. Sometime after Watkins died in 1938, Peshakova returned to Wisconsin, where she died in Marshall on 11 May 1975. 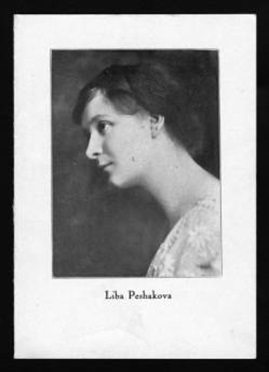