Mary Miller Fleming was born on October 22, 1870 in Knoxville, Tennessee to parents John Miller Fleming and Anna Boyd Fleming. Her father was a colorful character whose politically charged work as an attorney and newspaper editor often escalated into physical conflict. Mary's political influence in her adulthood was more subtle than her father's but still had a powerful impact. As an adult, Mary used her position as a leading musician, writer, and skilled organizer of musical events as her primary mode of social influence.

The young Mary Fleming developed a reputation as a promising soprano. In addition to musical training, she studied at the Martha Washington College in Abingdon, Virginia. After graduation, Mary's family objected to her pursuing a professional career in opera. She nevertheless continued singing in churches and at social gatherings and still became well known for her vocal work. In addition to a plethora of singing engagements throughout the South, she also sang at the 1893 World's Columbian Exposition in Chicago and at St. Louis's 1904 World's Fair.

On Christmas Eve 1896, Mary married railroad executive John Lamar Meek in Orlando, Florida. Interestingly, historian Elna C. Green notes that most Southern railroad officers and their wives were anti-suffragists and that Mary was a rarity for her pro-women's suffrage stance. The couple spent the first part of their married life in Knoxville, living near the University of Tennessee on West Cumberland Avenue. In 1900 they welcomed their only child, a son named John Fleming Meek.

John's career with the Southern Railroad took Mary and her family back and forth between Knoxville and Chattanooga and the Meeks lived for about a decade in Atlanta, Georgia. Mary's reputation as a skilled singer may have eased her entry into social settings, as she appears to have become a prominent presence in the social milieu of every city in which the family resided. Newspapers noted the family's comings and goings and their travel calendar was a frequent topic in the social pages. In 1914, when Mary moved from Atlanta to Chattanooga a newspaper noted that, "Mrs. Meek is a prominent matron of Atlanta society, and will be an acquisition to local social circles."

Mary's robust social networks were a means to civic leadership and progressive reform. Described as a "popular clubwoman," she enthusiastically rode the wave of the Progressive Era's women's club movement. A few of the many clubs she was involved in include: the Writers Club, the Shakespeare Club, the League of American Pen Women, the Daughters of the American Revolution, and the MacDowell Club. Most notably, she served as a leading figure in music clubs, eventually serving as president of the 4-state "Dixie District" for the National Federation of Music Clubs. Her leadership skills were showcased in her organization of musical entertainment for fifty thousand soldiers during World War I. Mary partook in the clubs' facilitation of women's engagement with high arts and literature. She also harnessed the potential that came along with a club's organized structure to influence public policy. For example, Mary demonstrated the ability for clubwomen to make lasting policy changes through her successful effort to mandate musical education in Tennessee's public schools. Mary was additionally a leader in the Presbyterian church, where she served in the women's auxiliary and sang in church choruses.

Mary used her leading position in the music community to promote the women's suffrage cause. For example, in 1915 she organized a fundraising event for the Chattanooga Equal Suffrage Association, where noted orator Rev. Dr. Willis Wilkinson Memminger performed Richard Strauss's 1897 arrangement of Tennyson's Enoch Arden. In another noteworthy example, she chaired the entertainment committee to muster up public enthusiasm during Carrie Chapman Catt's vital July 1920 visit to Chattanooga. A month later, in August 1920, Tennessee ratified the Nineteenth Amendment becoming the final necessary state to ensure its passage.

In the wake of the Supreme Court's decision in Bradwell v. Illinois (1873) that it was constitutional for professional guilds to discriminate based on sex, Mary's career as a composer and writer made her a soldier in the battle for women's representation and fair compensation in a wide array of careers. She spoke at a 1929 event where women discussed their experiences as a woman worker in various fields, such as "Women in Newspaper Work" and "Women Artists." At the event, Mary spoke about "The Woman Composer of Music" and sang songs composed by Tennessee women. Throughout her life, Mary had collections of writing and songs published. She additionally distributed vocal recordings through the Columbia Phonograph Company, published her compositions as sheet music, and was compensated for the use of her songs in advertisements. Most notably, in 1928, a year before her death from cancer, Mary won a contest for a new University of Tennessee Alma Mater. Although Mary was not a graduate of the University of Tennessee, she did attend their summer school programs and both her son and husband were alumni. Her composition "On a Hallowed Hill" won the $50 prize and is still sung at UT ceremonies and sporting events to this day. 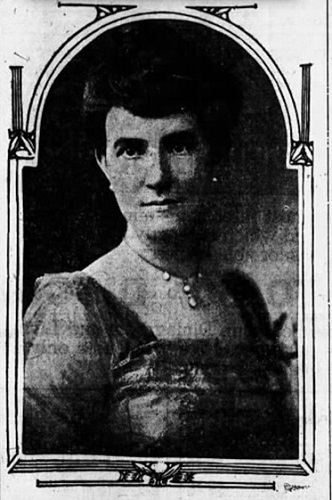 "To Give Suffrage Concert: Mrs. John Lamar Meek Planning Program for April 20." The