Biographical Sketch of Florence Richardson Usher by Barben and Bohn

LINK to another sketch about Florence Richardson

Florence Richardson was born in St. Louis, Missouri, on March 14, 1889, to James Richardson and Florence Wyman Richardson (See the biographical sketch for her mother). She had five siblings, three brothers and two sisters. Like her mother, Florence Wyman Richardson, Florence was dedicated to the women's suffrage cause. Usher's interest in women's suffrage began at a young age. In 1907 at the age of eighteen, she began writing letters to prominent women's social clubs to find other women who were interested in the movement.

In March 1910, the mother and daughter duo invited women who they thought would be interested in suffrage to a meeting. This meeting was the start of the St. Louis Equal Suffrage League. Florence Wyman Richardson was elected the first president, and the group got to work quickly. In 1911, the league successfully persuaded prominent British suffragist Emmeline Pankhurst to give a lecture in St. Louis. That same year Florence and her mother worked together with other suffrage organizations to form the statewide Missouri Equal Suffrage League. Through her involvement in that group, the younger Florence reached out to African American women in St. Louis and encouraged them to create their own organizations.

Florence (the daughter) married Roland Usher in 1910 and continued to work for woman suffrage. In April of 1911, Florence (now Usher) was elected to head the league's lecture committee. She held the position for six years and sat on the board of governors in 1912. She was later elected secretary in 1914. In the midst of holding these positions, Usher wrote a pamphlet entitled "A Question of Fitness," where she argued that women were fit to vote. In 1913 the National American Woman Suffrage Association published and distributed this pamphlet.

Around this same time, Usher's active participation in the suffrage movement decreased as she focused on her family and life at home. By 1920 the Ushers had three children, ages 8, 5, and 1. Her husband was a professor of History. After the Nineteenth Amendment was ratified in 1920, Florence Usher turned her attention to the civil rights movement. She was an active member in civil rights organizations such as the Urban League until her death on March 30, 1966.

In 1931 Florence Richardson Usher was honored as one of Missouri's suffrage pioneers on a plaque in Jefferson City. The plaque, along with scrapbooks she created that cover the suffrage movement from 1909 to 1913, show the fight for women's suffrage on the national, state, and local levels. Usher's contributions and legacies demonstrate that even young women could use their voices so that all women's voices could be heard. 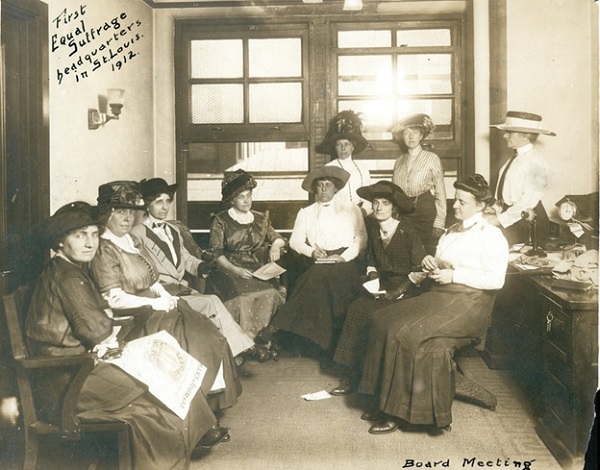 Florence Richardson Usher's life and role in Missouri women's suffrage are treated in Margot McMillen's The Golden Lane: How Missouri Women Gained the Vote and Changed History (Charleston, The History Press, 2011): 52-56. Her participation in the creation of the St. Louis Equal Suffrage League appears in Anne (André) Johnson's Notable Women of St. Louis, 1914 (St. Louis: Woodward, 1914): 205 and the National American Woman Suffrage Association's The History of Woman Suffrage (New York: J.J. Little & Ives Company, 1922): 343 [LINK]. More information on the creation of the St. Louis Equal Suffrage League can be found in "History of Woman Suffrage in Missouri," edited by Mary Semple Scott, Missouri Historical Review XIV:3-4 (April-July, 1920). Usher's participation in the National Urban League is explained in Katharine T. Corbett's In Her Place: A Guide to St. Louis Women's History (St. Louis: Missouri Historical Society Press): 198 and Nancy Cho's "National Urban League" at https://www.blackpast.org/. Reference to Usher's publication of A Question of Fitness is found in the Proceedings of the National-American Woman Suffrage Association Vol. 43-45 (New York: National-American Woman Suffrage Association, 1912): 34. Information about her personal life and beliefs is available in her scrapbooks located at the State Historical Society of Missouri in their St. Louis Research Center.