Anna Blanchard Truax was born on February 28, 1863. She grew up in Toledo, Ohio with her parents Perry Blanchard and Jane Laura (Graves) Truax, and six siblings. In the summer of 1883, while visiting relatives in Denver, Colorado, Anna met attorney Robert Wilbur Steele. After marrying on February 28, 1884, in Ohio, Robert and Anna Steele returned to Denver to start a family. Records indicated they had five children, although Henry, William, and Frances Edwina died in early childhood. Only Robert Jr. and Jane lived to adulthood.

Robert Steele practiced law until winning his election for District Attorney and then became a County Court judge in 1895. During his term, he established a Juvenile Field Day at court to help rather than punish juvenile offenders as adults. In 1907, he was elected Chief Justice of the Supreme Court. During his reelection campaign in 1910, Steele suffered a stroke of apoplexy and died a week later. He was remembered as "the people's judge" who upheld justice for women and children and Steele Elementary School in Denver was named in his honor. Robert Wilbur Steele: Defender of Liberty by Walter Wilder was published in 1913. Anna wrote the preface describing her husband's purpose and efforts for justice. Devoted, Mrs. Steele remained active in civil and political work upholding justice for women and children in the community.

Anna Steele was active in the 1893 campaign that won suffrage for Colorado women. She was later included among the many women involved in the work of the National American Woman Suffrage Association. In Representative Women of Colorado (1911), she is described as: "educational, club, and philanthropic work; wife of our eminent Chief Justice Robert W. Steele; member, Board Woman's Press Club; thirty years resident of Denver. Ex-member, Board Children's Hospital."

On the morning of April 25, 1914, The Rocky Mountain News and Times reported, "Assembled women headed by Mrs. Robert Steele, widow of the late chief justice, will march to the governor's office in martial array." A "mass meeting" of one thousand women marched peacefully and held a vigil at the capitol calling for federal protection against the recent strike-related deaths of women and children at the mining camp in Ludlow, Colorado. Mrs. Steele was one of the women appointed to convey their demands for justice to Governor Ammon. Determined, the women of Denver remained at his office until he dictated and sent a telegram to President Wilson requesting an appeal for federal help. Their effort paid off when federal troops were dispatched on April 28, ending the violence and bloodshed.

In September 1914, Anna was elected Vice-chairwoman of the Democratic State Central Committee Party. She was also on the board of Denver's Woman's Press Club during a time when the social and political power of women was shifting. Formed in 1898, the club became a haven for encouraging women writers. Many were actively fighting for better conditions for women and children.

It was not uncommon for women with influence to host parlor meetings and receptions for political discussions. Mrs. Steele opened her Denver home until the year of her death. She died in December 1932 after a brief illness. Anna T. Steele's grave is located in Fairmont Cemetery, Denver, CO. 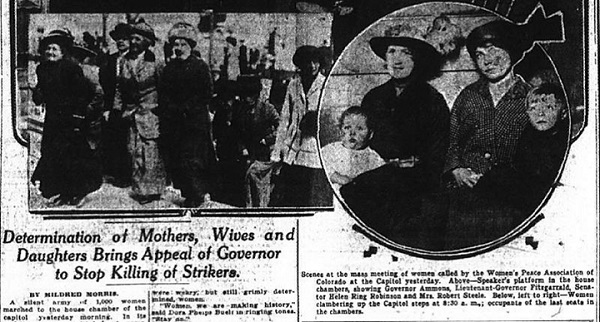 "Members of the 1893 Campaign," accessed online at https://coloradogenealogy.com/history/members_of_the_1893_campaign.htm .

Semple, James Alexander. Representative Women of Colorado: A Pictorial Collection of the Women of Colorado Who Have Attained Prominence in the Social, Political, Professional, Pioneer and Club Life of the State. Denver : Williamson Haffner Company, 1911, p. 161.