By Isha Angadi, undergraduate student at the University of Maryland, College Park

Georgia Eliza Hopley was born on April 29, 1858 in Bucyrus, Ohio. Hopley, a first generation American, is best known as the first woman prohibition agent in the United States and also the first woman in Ohio to actively work in newspapers. She studied at Bucyrus Union School, Ohio and later studied in Paris for a year and then London, England for three years.

Hopley's family was full of active public figures. She was the daughter of John Prat Hopley and Georgianna Rochester Hopley. She was the sixth of ten children, three daughters and seven sons; one son died in early childhood. Her father John Hopley, known as the "Nestor of Ohio Journalism," owned and edited the Bucyrus Journal and ​the Bucyrus Evening Telegraph​. Her mother, Georgianna, was very active in Ohio Campaigns of the Woman's Christian Temperance Union (WCTU). The WCTU focused on a "​sober and pure world." The constitution of the WCTU called for "the entire prohibition of the manufacture and sale of intoxicating liquors as a beverage." Additionally, she was also a part of an unnamed band of women who would voice their opinions about the negative effects of liquor and its hand in making the country unsafe. Later, Hopley would follow in both of her parents' footsteps.

Hopley's newspaper columns appeared in various newspapers from approximately 1880 until her death in 1944. In the 1880s, Hopley contributed to the ​Woman's Tribune. During the 1890s, she became the first woman reporter who was regularly working in Columbus, Ohio. She believed that a woman could do more than cover small pieces of news, and that women could report some events better than men. On July 6, 1893 Miss Hopley became the proprietor and editor of the Columbus School Journal. She corresponded and contributed to about 23 publications, several newspapers, trade journals, and magazines. During her later time in Europe, Hopley worked as a correspondent in the Associated Press​. She was also a contributor to the ​London Daily Mail,​ ​Evening News​, Standard​, ​Express,​ ​The Lady​ and the​ ​Paris Mail​.

Throughout the 1900s, Hopley was extensively involved in political and social advocacy. Active in the woman suffrage movement, she collected information for a broadside titled​"Woman Suffrage Co-Equal with Man Suffrage" that was published by the Women Suffrage Party of the City of New York in 1901. Hopley's compilation listed state federations and quoted prominent male labor leaders endorsing woman suffrage. At this time, Hopley was focused on connecting gender and labor issues herself. In fall 1901, she was appointed as a special agent of the State Bureau of Labor Statistics, where she focused on education and publicity and worked with women factory workers. During the same year, she also lectured about the conditions of women workers on the Chautauqua Circuit. ​

Hopley was also appointed as a representative for Ohio at the Paris Exposition by Governor George K. Nash in 1900. She was selected by Nash as one of the two lady managers of the Ohio board of commissioners at the Pan American Exposition in Buffalo, New York in 1901. In 1909, she traveled to London, England to address the WCTU Meeting at which the Countess of Carlisle was present. Later, in 1918 and 1920, she was in charge of the publicity work for women in the Republican governor and presidential nomination campaigns. In 1919, she became known for the successful political campaign for the mayor of Columbus. She also wrote a book titled McKinley's Campaign.

In 1922, Hopley was sworn in as the first woman prohibition agent of the United States Bureau of Prohibition, she served under Federal Prohibition Commissioner Roy A. Haynes. ​President Warren G. Harding appointed her to be the director of constructive publicity for the bureau. ​The main function of the Bureau of Prohibition was to stop the selling and consumption of alcohol. During her time as a temperance advocate and a prohibition agent, she was quoted in popular newspapers multiple times. For example, in an Evening Star article titled, ​"First Woman Prohibition Agent Says her Sex Must see to Law Enforcement" she talked about the difficulties of detecting a women bootlegger over detecting a male law-breaker. She was also quoted in the Washington Times in August 1922 on the importance of the role of women in increasing temperance. In this article, she talked about how the Volstead Act or National Prohibition Act reduced the consumption of alcohol. She mentioned her thoughts about the right to vote women in this piece. She said, ​"While there are many women who had no desire to be granted the right of franchise, since the duty has been imposed upon them at this most opportune time, affording them the opportunity and privilege of mobilizing under the banner in the greatest battle ever waged in behalf of that greatest of all institutions, the American home, they will not be found wanting." She was driven by a quote from Abraham Lincoln: "Let reverence for the laws be the political religion of the nation." She traveled through the country to educate people about ​prohibition, law enforcement, and women's voting issues. In 1925, Hopley resigned due to criticism of her publicity and overstepping the scope of her duties as a prohibition agent.

Hopley continued on as the writer and editor of the ​Ohio Newspapers,​ a firm where multiple members of her family worked. She remained active in public meetings and organizations, including the New Era Club, Eastern Star, and the WCTU. Additionally, she was the Vice president of the Missionary Society, the chairperson of the Civic Improvement Committee, and the chairperson of the resolution committee of the Ohio Women's Newspapers Association.

Through journalism and advocacy, Georgia Hopley brought to light issues that were deliberately ignored or considered unimportant. Like her father, she also contributed to journalism in the United States until she died at the age of 86 on July 1, 1944 following a fall at her home. Though she traveled the country and the world during her lifetime, she died in her birthplace of Bucyrus, Ohio.

Fig. 1. Swearing in Ceremony of Hopley. She is known for her quote "I​ hope the first bootlegger I get is not the 'first woman bootlegger'" said after being sworn in, in 1922. It is believed that after she was hired, local law enforcement began hiring more women. 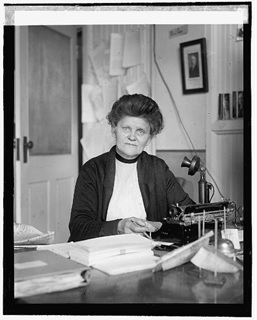 The Ohio Blue Book; or, Who's Who in the Buckeye State; a Cyclopedia of Biography of Men and Women of Ohio,​ archive.org/stream/ohiobluebookorwh00invant#page/n240/mode/1up.