Dr. Mary Noyes Farr was a distinguished professional woman active in South Dakota's woman suffrage movement. Farr was born in New Hampshire in June 1853 to Rufus H. and Patience Gordon Noyes. She graduated in 1874 from Miss Philena McKeen's School in Andover, Massachusetts, where she studied art. She also studied art in Chicago and Boston. Noyes worked as an educator in New Hampshire, Iowa, and Washington D.C. before marrying Colonel Edward Payson Farr, a Civil War veteran, in October 1882, in Landaff, New Hampshire. The couple, along with Mary's brother, Frank Noyes, moved to Harrold, Dakota Territory, in 1883. Together, they "accumulated many fertile acres" for farming. Her husband opened a general store and she, a millinery business. When he took a job as a "bank cashier" for the National Bank of Commerce in 1890, they moved to Pierre. She worked in Pierre's school system and had an art studio.

In 1901 Mary Farr graduated as a physician from a Boston Osteopath school and became one of the first women doctors in Pierre. Farr helped form a state Osteopath Association and in 1907 lobbied the state legislature for laws to regulate the occupation. South Dakota's governors repeatedly appointed Farr to the "state board of osteopathic examiners," where at different times she held the offices of secretary and treasurer and served until after 1917.

Farr gained many leadership experiences working with women's and civic organizations. In the 1890s she led the National Floral Emblem Society of South Dakota and she took charge of the state's "educational exhibit" at the 1893 Chicago World's Fair; she also served as a "juror of awards" for the fair's Liberal Arts Department. The masonic women's association of the Order of the Eastern Star named her Grand Worthy Matron in 1905 and she held the title of Grand Receiver for the Degree of Honor, a female auxiliary group to the Ancient Order of United Workmen. For the Women's Relief Corps (W.R.C.), Farr served as president of the state's "Department" and as national senior vice-president. She toured local W.R.C. branches and fundraised to support the state's Soldier's Home, Reform School, Children's Home, and Home Library. She solicited among the state's editors for donations of weekly and daily newspaper subscriptions and also worked to promote patriotism in schools and churches. She was a member of Pierre's "Woman's Club" and served in 1910 as a South Dakota delegate to the National Conservation Congress held in St. Paul, Minnesota. A local notable, Farr presented diplomas to some 30 graduates of the Pierre Indian School in June 1915. She held a life membership in South Dakota's Historical Society.

Farr's professional, civic, and government lobbying activities prepared her to advocate well for woman suffrage. In 1915, representing the W.C.T.U., Farr served on the legislative committee of South Dakota Universal Franchise League (SDUFL). The women took only two weeks to convince the legislature to submit a woman suffrage measure to the states' voters, but the 1916 referendum lost.

When her husband became "commandant" of the State Soldiers Home in 1917, the Farrs moved to Hot Springs. Her husband died in 1923 and she returned to Pierre. In 1924, at age 68, Farr became the first female candidate to serve as Sergeant at Arms for the South Dakota Senate; newspapers predicted success, suggesting she would be the "only woman sergeant at arms of a legislative body in the United States." Mary Noyes Farr, a Congregationalist, died on 1 January 1938 and was laid to rest at the Riverside Cemetery in Pierre, South Dakota. 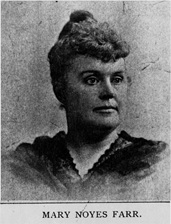 Goodspeed, Weston Arthur. The Province and the States: A History of the Province of Louisiana Under France and Spain, and the Territories and States of the United States Formed Therefore, vo. 7 (South Dakota). Madison, Wisconsin: Western Historical Association, 1904, pp. 239-240.