Before her marriage, Elsie Agnes Lancaster became active in the suffrage movement in her home state of New York. In June 1914 she joined other New York women holding open-air suffrage meetings. Lancaster focused her speech "on the necessity of woman's having the ballot for the protection of her home and children." In July Lancaster and other suffragists pitched a tent in front of court houses and other prominent venues in Chautauqua, Cattaraugus, Allegany, and Steuben counties of upstate New York. A banner hung from their tent read: "Women's Political Party Union." "Voters for Women," and "Victory in 1915." Also, during that month Lancaster and other local women asked former State Senator and Republican Harvey D. Hinman, who was running for New York governor, his stance on enfranchisement of women.

Alice Paul hired Elsie Lancaster, a member of the Congressional Union, to travel to Wyoming and Utah, where women had been enfranchised. In September 1914, she went to Wyoming to establish a suffrage headquarters in Cheyenne and "to direct the fight there against the Democrats." Lancaster was assisted in this work by Gertrude S. Hunter of Minneapolis, Minnesota. Alice Paul gave Lancaster a slide show to be introduced between films at movie theaters. The slide show displayed the words: "'Women voters—Oppose the party which blocks the suffrage amendment in Congress. Defeat the Democratic candidates for Congress.'" The slide show tactic was also being used in Oregon, another state where women had the right to vote. 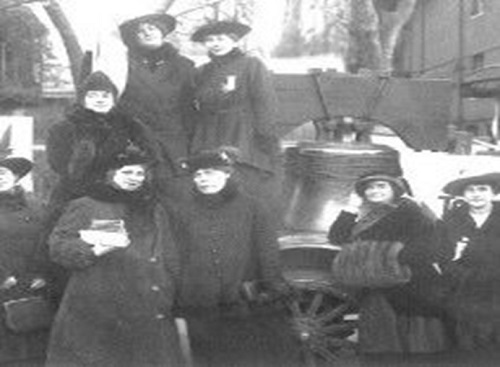 In October 1914 Lancaster arrived in Utah to establish a suffrage headquarters in Salt Lake City and to oppose Democratic candidates. While Lancaster worked in Utah, the editor of the Ogden Standard newspaper wrote a scathing article against suffrage and asked why she was in Utah. He did not think suffragists from the East should be coming to Utah, where women were already enfranchised. During the month of October Lancaster corresponded with Alice Paul and Doris Stevens.

Apparently, Elsie Lancaster did not continue in the fight for women's rights following the passage of the Nineteenth Amendment in 1920. She was a member of the Home Club Players, a small drama league. She produced and acted in plays offered in Washington, D.C. from 1915 to 1917. She died in December 1977 and was buried in Rock Creek Cemetery in Washington, D.C. Her daughter Elinor Palmieri, who died in 1960, is also buried there.