Josephine Beach Day was born in Hartford, Connecticut on May 4, 1880 to George Herbert Day and prominent suffragist Katherine Beach. Josephine was the oldest of five children and the only girl in the family. As a child, Josephine lived next door to Katherine Houghton Hepburn in Hartford and the two families worked in tandem to improve the lives of women not only Hartford, but in all of Connecticut.

Leading up to 1920, Josephine was part of the Daughters of the American Revolution and the Society of the Colonial Dames as her lineage spans back to before the United States won its independence. At the outset of her activist career, she, along with her Hepburn neighbors, founded the Hartford anti-prostitution crusade to fight prostitution in the city, and the Hartford Equal Franchise League (HEFL), which later became part of National American Woman Suffrage Association (NAWSA). When HEFL became part of NAWSA, she served as treasurer, was on the executive board and on the committee dedicated to war work.

When Alice Paul split from NAWSA and founded the National Woman's Party (NWP), Josephine Bennett and Hepburn co-founded the Connecticut branch of the NWP. Josephine represented Connecticut in Washington, D.C. She also served as treasurer of the Connecticut branch of the National Woman's Party and on the NWP's National Advisory Council. She was one of fourteen women from Connecticut to be jailed during the wartime protests. Josephine participated in a demonstration in Lafayette Square near the White House in December 1918; she was arrested in a January 1919 protest in the same place and served 5 days in jail. In June 1920, Josephine joined NWP picketers at the Republican convention in Chicago.

After the nineteenth amendment was passed in 1920, Josephine, with her mother and the Hepburns, founded the Connecticut League of Women Voters. This organization encouraged women to register and vote. Afterward, she ran for office in 1921 for the U.S. Senate and Connecticut Attorney-General a year later. Both times she ran on a third-party ticket, the Farmer-Labor Party, and lost in both elections in a Republican-controlled state.

Josephine's other contributions included the construction of the Brookwood Labor College, the first residential workers' college, in Katonah, NY. Lastly, Josephine created Connecticut's first organization for the liberalization of birth control laws so that women could control their own bodies.

Josephine Bennett's biographical information is available through the U.S. Census and Ancestry.com. Bennett's role in the suffrage movement is documented in Denise W. Merrill, "We Stand on the Shoulders of Giants: Honoring the Heroes of Women's Suffrage in Connecticut," 2011, accessed online at http://www.ct.gov/sots/lib/sots/registermanual/2011dedicationweb.pdf and by Steve Thornton, "A Feeling of Solidarity: Labor Unions and Suffragists Team Up Comments" accessed online at http://connecticuthistory.org/a-feeling-of-solidarity-labor-unions-and-suffragists-team-up/.
See also Carole Nichols, Votes and More for Women: Suffrage and After in Connecticut (New York: Haworth Press, 1983), p. 71; Inez Haynes Irwin, The Story of Alice Paul and the National Women's Party (Denlinger's, 1977), 397, 405, 460. 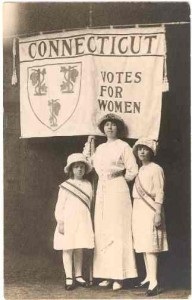