As a published author, she wrote books of poetry--Christus: A Story of Love and Christus: The Messenger of Peace, published in England in 1909, plus Wings to Dare, a collection of poetry, published in 1925. Grace took out a copyright in 1914 for 'The Snow Queen,' a play in four acts adapted from the Hans Christian Andersen story.

The Whites moved to 1734 N Street, Washington, D.C. in 1908, but kept their social connections in New York.

Grace became active in the woman suffrage movement. Through correspondence with Alice Paul, founder of the National Woman's Party, she learned of the tension between the NAWSA and the Paul-led Congressional Union. In 1914 Grace joined 400 suffragists at the home of Elizabeth Kent to raise money to enable the Congressional Union to function as a full-fledged national suffrage group. Grace, Belle LaFollette, and Ellen Hale (daughter of Edward Everett Hale) raised $10,000 for the Union. In 1916 the Union merged with the National Woman's Party; Grace was a member of the Advisory Committee.

In 1915, Grace became a Charter Member and Vice Chairman of the Women for Peace Party- later named The Women's International League for Peace and Freedom--WILPF. In 1923 she led a delegation to interview President Coolidge and in 1931 Grace became Chairman of the New York State branch. She wrote a sonnet to Jane Addams, first International President of the League and Nobel Prize winner. This was presented in 1933 at a benefit for the Mary Fisher Home which offered shelter for authors, artists, musicians, and teachers.

In 1922 the Whites sold their D.C. home to the General Federation of Women's Clubs; it continues to serve as their headquarters today. Grace had decorated some of the home's furnishings with poetic sentiments. A few of these are now in the GFWC's collections, including the music room mantel, engraved with the words: "I cannot warm you if your heart is cold." She donated her husband's American Indian artifacts to the Smithsonian following his death in 1923.

Eventually Grace moved back to New York and built "The Kedge" in Westport, CT, an unusual home of modern design built of steel and cement and faced with brick.

She was a member of the Woman's City Club of New York and the Arts Club of Washington. Grace Hoffman White died in Westport, CT, July 17, 1937. 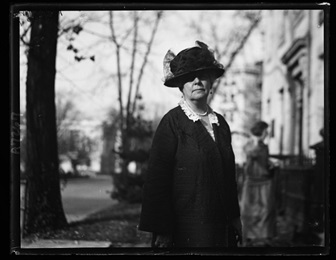