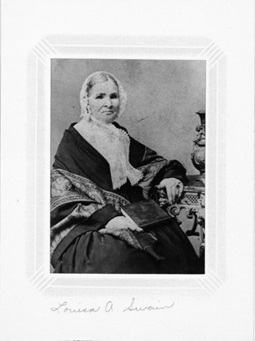 Louisa Swain was born in Norfolk, Virginia in 1801, the exact month and day of her birth unknown, as Louisa Ann Gardner. She was raised in the Quaker faith by her mother and sea captain of a father. When she was quite young, her father was lost at sea and a few years following that, her mother passed away. She became an orphan and moved to Baltimore, Maryland to live with an uncle. It was in Baltimore that she met Steven Swain, a chair factory owner, and the two married in 1821. The married mother of four and her husband moved quite frequently but settled into Laramie, Wyoming in 1869 after following their son and his family to the territory.

When the Wyoming Territory was organized in 1869, women's suffrage was granted by the first legislature. September 6, 1870, was the first Election Day on which women of Wyoming had the change to participate. On the morning of September 6th, the first woman to deposit her vote was a seventy-year-old Louisa Swain. Louisa the first woman to cast her vote in a general election in the Wyoming Territory, under a law allowing women to vote and to hold office. Not long after participating in the election Louisa and her husband returned to Maryland to be closer to a daughter. On January 25th, 1880 Louisa Swain passed away in Lutherville, Maryland and was buried in the Friends Burial ground in Baltimore, Maryland.

Louisa's legacy lives on through the Louisa Swain Foundation (founded in Laramie, Wyoming in 2001), which is dedicated to preserving and celebrating the heritage of Louisa Swain and to fostering education in the areas of justice, democracy, freedom, human rights, and suffrage, and through Louisa Swain day that has been recognized by Congress since 2008 as September 6th in honor of her historic and memorable vote in a general election.