Alice Matilda "Olive" White was born in Clarendon, Vermont, on December 25, 1846. Her ancestors were among the early settlers of Vermont. Her father, Charles White (1803-1870), was a pioneer geologist and the discoverer of several of the Vermont marble quarries. Her mother was Mary Ann Roberts (1824-1906). She spent her childhood among the Green Mountains and was educated under Mrs. H. F. Leavitt in the female seminary established by Emma Willard, in Middlebury, Vermont. She was lucky to grow up with a mind imbued with a stern morality, tempered by a love of humanity, which led her in girlhood to be interested in the abolition of slavery.

Alice also had enduring interests in education and temperance, which found in her an enthusiastic friend. She marveled at the ease with which the prohibitory liquor law of Vermont was evaded. After spending much time and energy interviewing judges, justices, sheriffs, and States' attorneys, she concluded that those officers, holding their positions through the votes of a political party, would go no further in good works than that party demanded. Her parlor was a gathering place for temperance people and prohibitionists.

She wrote temperance articles and addresses, as well as short poems and stories, for New York papers and magazines. She was also active with Sunday-school work in the Methodist Episcopal Church. She was a contributor to the Rural New Yorker, the New York Weekly Witness, the Demorest's Magazine, which advocated for female education and employment, and other periodicals.

Although she is not known to have held official positions in the Vermont Women's Suffrage Association, she was cited in the History of Woman Suffrage (volume 4) for her "excellent service" and noted as having served as a Vermont delegate to the National convention at some point between 1883 and 1900.

Olive White married architect Clinton Smith (1846-1905) and they made their home in Middlebury, Vermont, until 1891, when her husband accepted a position in the War Department at Washington, D.C., as Chief of Construction and Repair, and moved his family there. In the capital, Alice was actively engaged in literary and temperance pursuits, becoming President of the Woman's Christian Temperance Union of the District of Columbia in 1898. The couple had six children together and Clinton Smith went on to design many buildings in Middlebury and around Vermont.

Alice died on August 26, 1918 and is buried with her husband at Foote Street Cemetery, Middlebury, under a beautiful monument. 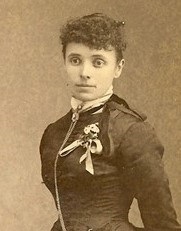